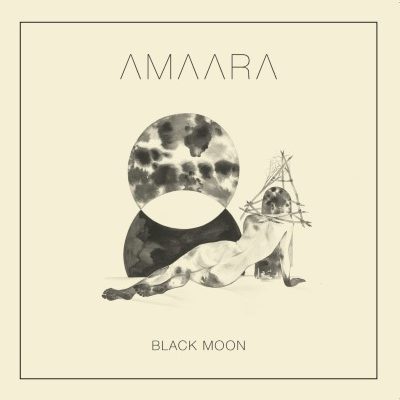 Black Moon is the latest multi-media project coming from Kaelen Ohm, better known as a member of Reuben and the Dark. Under the moniker of AMAARA, the talented musician, actor and award winning filmmaker, will be releasing her debut solo EP on June 22nd , 2017. The EP features 6 stunning new tracks, each contributing to the fairy-like genre that is ethereal dream pop.

Title track, “Black Moon” captures the essence of the entire EP perfectly. This ethereal track, with its haunting melody, creates a rather cinematic atmosphere. The harmonies in this track are phenomenal, as are the heavy, background drumbeats. Think an edgier version of The Staves’ music.

Following this track is “Dreamcatcher”. One thing Ohm has nailed with this EP is the backing vocals, and they certainly don’t disappoint on this track. The background harmonies, layered vocals, piano and steady drums create a dream-like atmosphere, leaving the listener in a peaceful yet melancholic haze.

“Blue” is the penultimate track on this EP. Another recurring thing on this EP is the use of prominent drum beats. This drum driven track empathizes with the broken hearted. Its glum lyrics stating “I’m blue baby/I’m blue for you” and “I lost my heart/ I lost my mind”. Other than this, the quiet track absolutely masters the echoing vocals and background harmonies. The marching drumbeat adds to the climax of the song, thus giving it more cinematic characteristics.

In conclusion, Ohm is an artist to watch out for. Waxing and waning between dreamy and melancholic, the Black Moon EP is an ethereal piece of work with massive potential. It is clear that AMAARA is an enchantress, the siren call of her moody vocals and spellbinding lyrics will be difficult to stay away from.