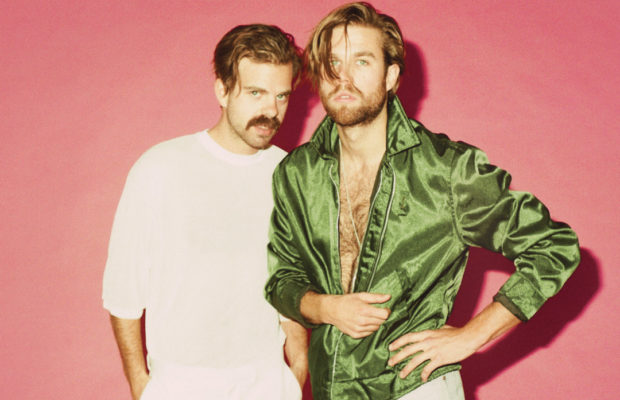 The Darcys are a alt-pop duo composed of Wes Markell and Jason Couse. They are part of Canada’s up coming class of alternative hitmakers. Their latest album, Centerfold is a modern re-imagining of 80’s pop. Smooth and funky guitar riffs and silky vocals carry every song as the Darcys take us through a journey through “palm trees, neon signs, and tinted windows.”. Before their show at HiFi Club in Calgary on June 16th, drummer Wes Markell sat down with Matthew Coyte of Canadian Beats to talk about life on the road and the future of the group.

Matthew Coyte: So how’s your guys’ tour going so far?

Wes Markell:  It’s been great actually. It feels like we just started, we had a few days off to recharge in Banff. So we played like, four shows than had four days off. We just played a show last night, and now tonight. It’s been really fun.

MC: What have been some of the highlights of travelling through Canada and the US?

WM: Getting through the desert, especially like a record that sounds like a record we made was kinda fun. Eric and I, our sound tech, got to hike up a couple mountains in Banff which is a nice thing to do on a day off. The shows have been great, everyone has been so supportive and nice.

MC: What’s your favorite part of being on tour?

WM: Either the bad food, or the crappy hotels. I always forget which one I like more.

MC: Where’s been the best food?

MC: Was it any good?

WM: I liked it. I mean I’m a Cruise fan myself, so can’t really go wrong. I was willing to let it fail and I thought it worked out.

MC: What were some of the struggles you had with making “Centerfold”?

WM: Having to hang out with Jason (lead singer and guitarist) all the time is difficult. It was fun. We wrote so much. Just trying to whittle it down and accept that something is good and not beat it to death and work past it being good is something that’s hard to do. Sometimes you don’t allow something to be good enough and then you keep working and working. You kind of rob it of the magic that it initially had. Taking almost 100 songs and figuring out what 10 was a difficult process, but fun in the end.

MC: What were some of the inspirations for the album?

WM: I just noticed that crazy drawing *Points on wall to a sharpie sketch of what vaguely resembles a person giving birth*. “Warring” was a more arduous process and even though Jason and I were always sort of the main forces behind the record, we had two other people in the band and so you had to take a vote essentially and make sure everything worked. It was a lot easier to ego-maniacally get our way ’cause we just forced everyone out.

MC: Why did the other members of the band end up leaving?

WM: Mike (le Riche) was starting a band called Fake Palms, which is a cool band, and Dave (Hurlow) was pursuing writing a book. I think that right at that point, how are we going to manage all of these different things, and Jason and I kept writing through that process, and by the time we came out the other side and made a decision, we had so many songs that just Jason and I had been working on that it just seemed natural to keep going the way we did.

MC: Why was it important for you to continue under “The Darcys” and not start a new project?

WM: I think because I’m stubborn and we had a record deal. It was to kind of finish out our record deal I thought we would finish the amount of records that we were signed on for. It seemed premature to just kill the band and the name. I still wonder if maybe we should’ve put this (Centerfold) out under a different name and just done a more “Darcys” record if you will. It seemed natural, it seemed right and that’s what we did.

WM: We spent a month in New Zealand which is pretty fun, we spent two or three weeks in LA, just jetsetting to make a record which is not common for a band our size and it was a blast. The songs are fun and uplifting, and I think that helps the mood when you’re making the album, and when you’re hearing a fun song over and over again, it’s lot better than hearing a really sad song.

MC: What did you find were some of the differences between the reception of “Centerfold” versus “Warring”?

WM: There was a lot of new fans. With self-titled and “Warring” it was the a lot of the same people were happy and excited. With this one it was almost like we had the entire fan base revolve into a brand new group of people. Very positive reviews…better than I thought. I thought people would be like ‘Fuck you guys, you bastards!’ but nothing like that.

MC: If you and Jason were building a festival lineup, who would be your big five headliners?

WM: Jason is really into Kehlani right now, so i feel that he would make us put her on. The new Killers track I think is great. It’s on every single radio station, in every city. I would put them on there. I’m a Chromeo fan I think that would be fun. Maybe D’Angelo. Who else?… I’ve always wanted to see Beck, I’ve never seen Beck live, I would selfishly put him on there so that I got to see him assuming I got to go to my own hypothetical festival.

MC: What’s next musically for The Darcys?

WM: That is a question… We’ve been working on some songs, we’ve been doing some production work for some other people. We just put out this song called “Full Throttle” (https://soundcloud.com/muneshine/muneshine-full-throttle-feat-darcys) with a guy named Muneshine. Keeping everything warm, muscles loose, before we decide what the next actual project will be.