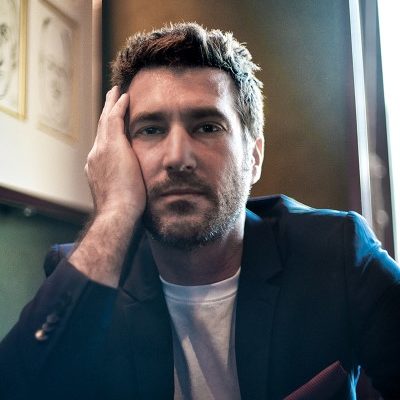 Lush. Revisionist. Buoyant, despite its layered themes.—all descriptors of Toronto artist Jon Stancer’s debut solo album, For The Birds. With its intriguing lyrical themes, myriad of complex instrumentals—rolling drums, jaunty piano, and a range of percussion—and compelling backstory, we just had to catch up with Stancer to get all the juicy details.

First of all, congratulations on the release of For The Birds. How does it feel for it to finally be recorded and released?

Thank you very much.  It feels fantastic.  Making a record is typically a major undertaking for anybody and I had been away from it for a long time, so I feel a great sense of accomplishment, as well as relief.  I think it’s a great album and I think there’s a good amount of stuff on it for different listeners to get into.  When I finished making it, I previewed it for a few close friends and they all came back with different favourites, which is what you want.  I did what I set out to do and that’s always going to feel great.

In your bio, it’s said that you took a break from the music scene for several years. May I ask what prompted that break, and why you decided that For The Birds would be your musical ‘comeback’, so to speak?

Apart from the creative side, I became disenchanted with pretty much every aspect of having a life in music.  I’m not going to go into specifics, but it was all making me quite bitter and sad.  The musical climate too, was starting to get completely out of whack, where you had artists like Rufus Wainwright and Elliott Smith coming out with beautiful records that were not receiving the exposure and support that they deserved and at the same time, having all of the ‘Britneys’ and American Idols shoved down our throats – music that to me, is mostly uninspiring.  There was a complete imbalance – and frankly, there still is – between really thoughtful and well-crafted music getting to the masses vs the formulaic, sound-alike, soul-less stuff that has become today’s ‘Pop’ music.  Look, there’s a place for everything and not all of that music is shit and I appreciate and acknowledge a lot of it as a very successful form of entertainment but at that time, all of this was forcing me to evaluate my place and I guess I resolved that I didn’t have one and chose to live with that.

I started to feel differently when Internet and then Satellite Radio began to emerge. Elliott Smith and Wilco and Ben Folds and Aimee Mann and Fiona Apple and Supergrass and Doves and The Shins and so many others were getting play.  You now had a way of navigating to so many more choices and had new ways to discover all kinds of great music that you never would have had any idea existed otherwise (unless you’re a maven and subscribed to all of the trades).  This gave me new hope.  If you’re a musician or a painter or a photographer or a novelist or a filmmaker, you want your work to have a chance at reaching people.  You’re not spending all of that time, energy and money to go completely unnoticed.  Anyone who says that they create art for art’s sake and not for public consumption is full of shit.  I now felt that with all of these innovations and the growth of social media, etc. that the playing field was leveling a little bit; that maybe I could find my place, or at least have a chance at being heard.  After much deliberation and several years of encouragement and nudging from various people, I finally decided to go for it.

Now, you were in the band Family Ritual before this debut solo album. In which ways does your album—and personal sound—differ from Family Ritual’s, if at all?

Family Ritual made one album and an EP that was never released.  We didn’t really get to develop much of a sound.  It was also a collaboration of 3 singer/writers, which meant different song-writing styles, different voices, etc.  One might be able to draw similarities between my contributions and some of the stuff on For The Birds, but I think those similarities are more apparent in the ambitious arrangements, rather than in the respective sounds, or between the songs.

For The Birds is a nine-track album, with each song brimming with heart and personality. Which track would you say you ended up being the most proud of?

Were there any songs that varied greatly from their conception to the finished product?

‘Perfect Place To Hide’ was conceived as a lullaby.  I was thinking I’d get a jazz trio to do the backing and I’d sing it, almost in a whisper.  When I started to demo the song though, I couldn’t remotely emulate a jazz trio.  I just don’t have the chops for that.  It was starting to frustrate me because every song was advancing quite nicely and this one wasn’t progressing at all and I didn’t want to go into a studio without having a decent foundation for it.  I finally realized that I didn’t have to do it as it was conceived.  It was a good idea but it wasn’t the only possibility.  I recorded a basic piano backing to a cool drum loop that I found.  That loop was the jumping off point for that song’s transformation.  It became something else completely after that.

And which song turned out to be the most difficult song to write?

There wasn’t necessarily one entire song.  There were parts of a few songs unfinished for quite a while, either because I was lacking in good ideas or because I was fixating on what I did have.  I had no bridge for ‘Turn Your Back On Your Regrets’ for the longest time.  I didn’t have the mid-section of ‘Take The Bait’ for a long time either.  ‘Dance In The Sun’ was piecemealed together over several weeks.  ‘No Right Turns’ had completely different lyrics and a space for a bridge, but no bridge.  I would just say that certain parts of certain songs took a little more time and effort to come up with than others.

As a songwriter, what ended up being the most personal song on the album for you? Which one would you be the most eager to play live?

‘Turn Your Back On Your Regrets’ is probably the best answer to both of those questions.

Speaking of, do you have any shows for 2017 lined up so far?

No.  I’m not sure how I want to go about that yet.  I know I should probably get out there and I’d very much like to and I would be fine just sitting down at a piano and singing a bunch of tunes like I’m in my living room or with a guitar like in a friend’s backyard, but then you’re not going to get what you hear on the album that way.  I’m weighing it…

And what is something about the album that you would want fans to know?

That Jono Grant is a musical wizard and that this album would not have turned out as it did if not for him.  He is a first rate producer who didn’t just understand my vision but who achieved it, to the very last note.  And if I go to him wanting to make a country / death metal record next, he’ll deliver the goods on that too.

Finally, thank you for your time and again, congratulations. Any parting words for the people at home?

Many thanks. To anyone who gives this record a chance, I am very grateful and I hope that you find something in it that resonates with you.