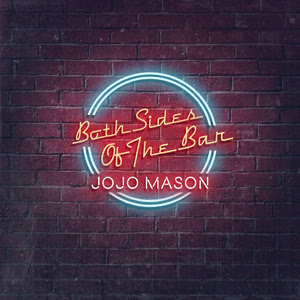 Just a year ago, JoJo Mason was telling listeners on an Ontario radio station that he was nervous to play in front of the Boots and Hearts crowd. Then, mere days later, he came out on stage and rocked the crowd like nobody’s business. His charm and sweet nature were apparent from the start and it not only shows in his demeanour it shows in his music.

When people first listen to JoJo’s first full length album, Both Sides of the Bar, there will be a more than a couple songs they already recognize mixed in with myriad of new and fantastic tracks. With radio hits like “Red Dress”, “It’s All Good”, “Made for You” and “Good Kinda Love” already out there, we already know JoJo is becoming a fast staple in Canadian country music. This album has been a long time coming and it’s safe to say it was definitely worth the wait.

I think my immediate favourite after listening to all the songs is “Under the Rainbow”. It’s an instant feel-good anthem that will have anybody wanting to clap to the beat. In a world where everything seems to be going wrong, this is a song that gives you a little bit of sunshine after the rain. In fact, the entire album is good spirited and leaves you feeling a little happier when you walk away. I mean, there are a number of occasions where I’ll suddenly be humming “Red Dress” or “Made for You” out of nowhere.

If anyone were to ask my opinion as to which track should be his new single, I would immediately suggest his title track, “Both Sides of the Bar”. It takes on a little more sombre note but still has a powerful message about not being alone.

JoJo Mason may have relied on Hockey as a career in the past, but he’s got a new gig now. He has found a home at 604 Records and in the world of country music. Definitely take a listen if you know what’s good for you and your ears.