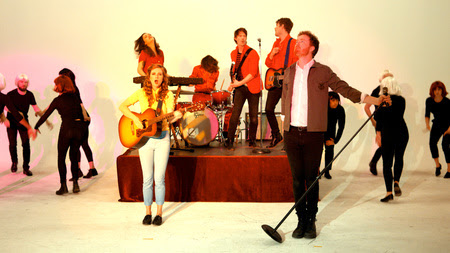 Earlier this week Toronto indie rockers Fast Romantics debuted the music video for their latest single “Everybody’s Trying to Steal Your Heart”. The video, which debuted on Indie88, was shot and edited in its entirety in just one week’s time! Lead singer Matthew Angus also directed the video alongside Ryan Thompson.

“Ryan came up with an amazing idea, but it seemed completely impossible considering the time we had due to our touring schedule,” recalls Matthew. “We’re the sort of band that is always up for a good challenge and thankfully so was Ryan. We worked day and night on this thing, on very little sleep and dozens of pots of coffee. Thanks to his talents, positivity, and some kind of magic, we’ve come out the other end with something we’re all really proud of, something that I think tells the story of the song perfectly.”

The bands critically acclaimed sophomore album American Love is available now via Light Organ Records and features the track Everybody’s Trying to Steal Your Heart. To celebrate the release of the new album, the band is throwing an album release party TONIGHT at the Mod Club Theatre in Toronto. Joining them onstage will be Danielle Duval and electric indie-pop band The Kents.

Watch the video on Indie88 here.