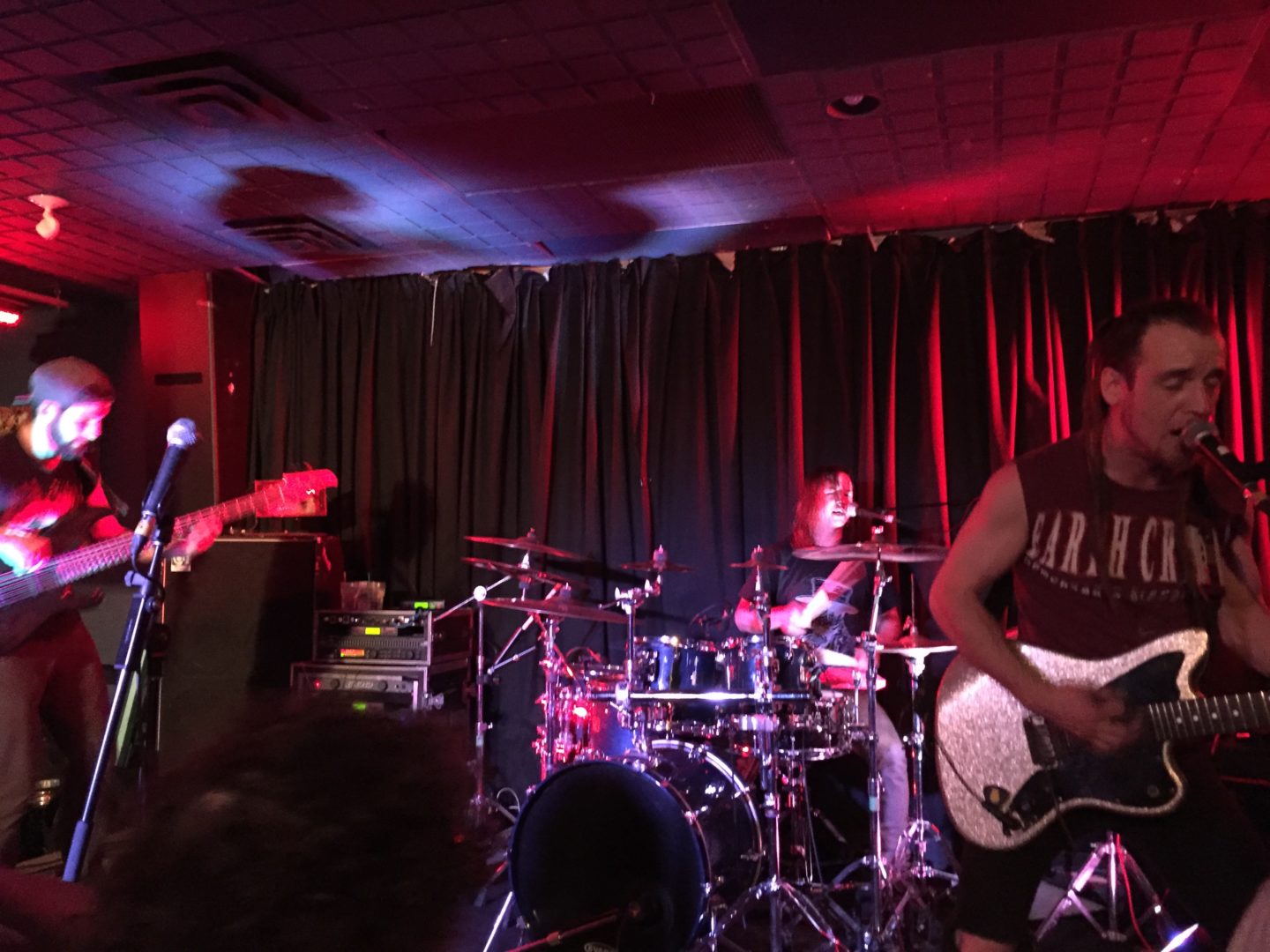 Who: Ninjaspy
When: May 26, 2017
Where: Vangelis Tavern, Saskatoon SK
Genre: This is Ninjaspy! (Spüken in a Dramatic, Movie Trailer Voice from the 90s)

One Line Review:  Vancouver based hardcore, multi-influenced, multi-arrangement phenomenon Ninjaspy reaffirm, with their excellent live show, professional candor, and humble demeanor, how the band one currently plays in, as well as most of the bands that one likes, are still lame, and now seem even lamer.

For those of you out there with the great taste and literary class to keep up with my highly insightful, clever, and downright witty reviews, “Congratulations!  You are officially the purveyors of good taste among your smaller-minded social group. “

If you have not read the Ninjaspy Spüken album review, check it out here.

All good, we can wait.

Time lapses are quite short in the literary world.

Unless there is text for no essential reason, either to further the content or elucidate the reader.

Yep, no need to waste time in print.

Great!  Now that were back let’s start with Ninjaspy’s dynamic Saskatoon opening including the sound check, and Adam Parent’s (drums) non-working in-ear monitors.

A line check before a set is akin to a mini-sound check to make sure everything is good to go onstage including stage monitors, mic levels, and amp volumes for the sound person to get a good overall mix from the front of house and for a solid onstage mix for the band.

While checking vocal monitors and instruments, there was a Roland sampler used for the effects on the record, including the cool, ambient sounds at the beginning of Spüken.  This night, however, the signal wasn’t going back to the Adam (I won’t use the band’s last names as they are the same), or, contrarily, was extremely loud.

(Side point – Phil Collins has permanent hearing loss after a sound person had his in-ears monitors too loud during a sound check.  True story.  I think…he did retire due to hearing issues…go look it up…)

It may seem unusual to mention the line check as part of a live show review, but what stood out was the easy going, professional nature of the entire band as they work patiently through a technical issue without any outward frustration or plain meanness.

It is unfortunate when a fan goes to a favourite musician or band’s show and discovers, through sound check or onstage antics, that their favourite musicians are just plain jerks, not that I would ever be unprofessional enough to mention names of musicians that I have personally seen be unnecessarily rude to sound people (Art Bergman).

Staying calm, cool and collected during the sound check was the perfect calm before Ninjaspy’s intense, perfectly played, storming set.  As a first time listener to Ninjaspy when reviewing their newest release Spüken (which you’ve now read) my initial reaction was “Could they pull this off live?  With the multi-genre, multi-arrangement approach to song writing, can it be replicated by three people on stage?”

The answer is an astounding yes, and yes!

Yes, a sai, like Raphael Teenage Mutant Ninja Turtle style.  Even the use of prop, a ninja weapon, which seems pandering due to the band name, was aesthetically and musically amazing.   Using a mic stand as a guitar slide is one thing, but using a potentially lethal martial arts weapon is a braver choice, and also makes the audience feel safer if the Foot clan suddenly crashes through the door.

Their live show was energetic, professional, excellently played, and great fun, which may sound like an odd choice of words for a prog-metal show.  Metal musicians, and metal crowds, tend to be the most polite of the heavy influenced genre as the more accomplished one is as a metal musician, the more obsessive and deliberate one needs to be in practice routine, self-evaluation, and meta-cognitive activities.

The artistic mindset is a strange mix of introvert and extrovert; thousands of hours are spend in solitude to create a work that is then presented to audiences over a condensed period of time, for the artist to go back to isolation for an extended period of time to create another new work.  Fans of true artistic endeavors often reflect the personalities of their chosen fandom, consisting of audiences that can be as introverted, and polite, as the performers (refer to sound check story above).

The pit was small, dedicated, and energetic, but never overbearing, making sure it stayed within the confines of the people who wanted to be involved and trying its collective best to allow standing audience members to not be pushed or accidentally mauled.  It was largely a peaceful roughhousing with only a few slippery floor moments.

With a set combining songs from their newest release Spüken, including the lead single “Speak”, the groove inspired “Jump Ya Bones”, and the driving multi-feel “What!!” to Pi Nature’s heavy-influenced “SOS From the SOS”, reggae / rock / metal / ska “Circle Pity,” and a song that needs to be in a commercial, any commercial, “Out of Tampons,” Ninjaspy recreates their recording with sweat, technique, and integrity.

Go see Ninjaspy as soon as possible.  Camp out on their front lawn and wait for them, if need be.  They’re nice guys, I’m sure they won’t mind. 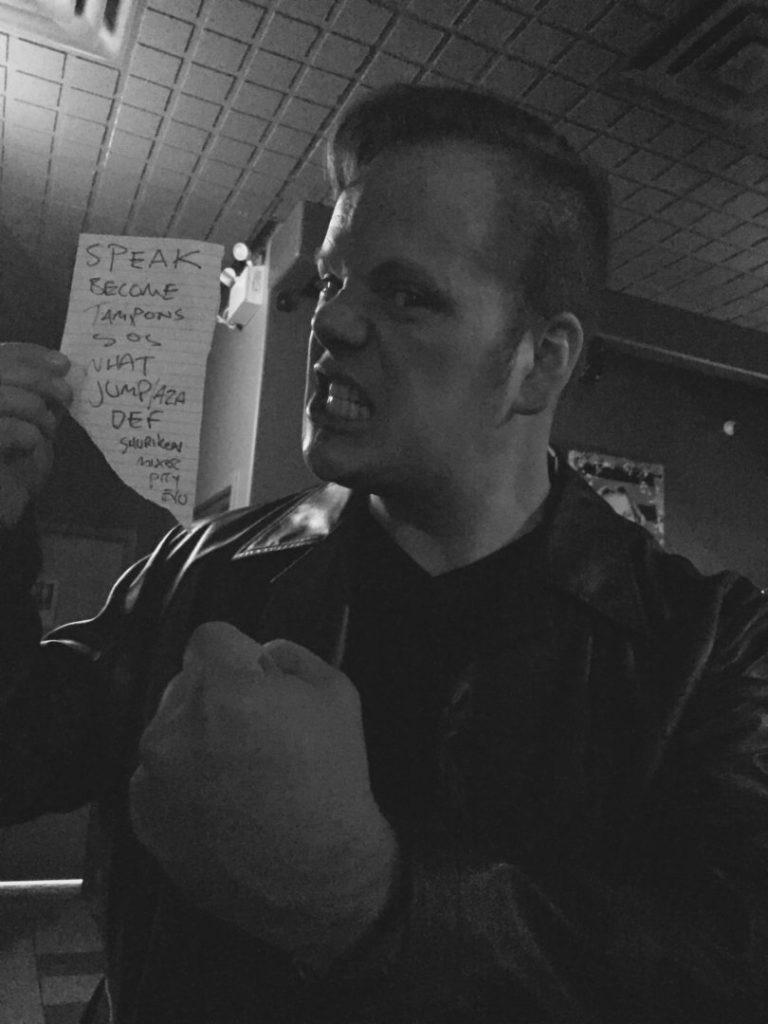 For information Ninjaspy news and extensive tour dates, head to http://www.ninjaspy.net/.  Ninjaspy’s new album Spüken is out now with the video for their first single “Speak” available on youtube.com.  Ninjaspy can be purchased on iTunes, Cd Baby and Bandcamp.