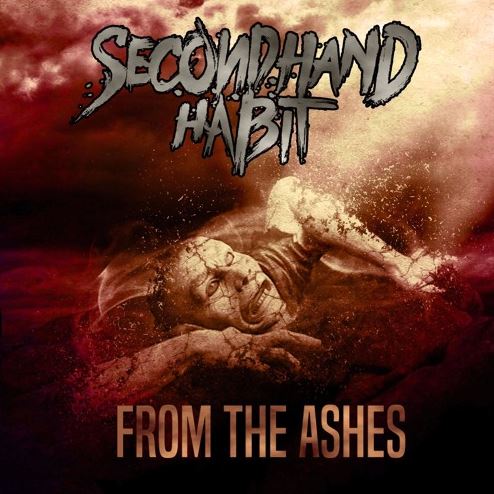 Secondhand Habit has just released their new EP From The Ashes on June 1st, the first featuring their new lineup. They’re having the official EP release party in their hometown of Victoria, at the Victoria Event Centre on June 24th and it’s bound to be a hard rocking, head banging, ear pounding night of high energy music from the hometown boys and their guests. This will be the third album from the band, and as I mentioned above, the first with their new lineup including: John Yellowlees on backing vocals and guitar, Jesse Turner on guitar and vocals, James Bowbrick on bass guitar and backup vocals, and Skyler Wilson on the drums. I plugged in my headphones and had a couple listens to the roughly twenty minute EP and I was rocking along the whole way through.

The opening track is called “Get My Fill” and it starts off with a catchy melodic guitar riff that seems to start telling the story before the vocals kick in, then Jesse Turner starts belting out the lyrics and it’s evident that these guys are the real deal! Jesse’s voice kind of reminds me of James Hetfield’s especially during the deep calm lows. From those deep calm lows, He seems to effortlessly shift into hard, loud, headbanger mode and it works!

The second track is called “Give Me All You’ve Got” and it starts out a little faster and heavier than the previous. There’s lots of catchy guitar hooks which is a common theme throughout the album. I guess you could consider this track the love song of the EP based on the lyrics, A hard rocking fast paced heavy metal love song that is…

The third track is the title track “From The Ashes” and it reminded me a little of Black Sabbath with the opening riff. For some reason the lyrics to this one grabbed me a little more than the rest, something about “sticking it to the Man” just kind of makes me smile! I love the chorus in this song and Skyler Wilson really has the drums pounding on this tune!

The fourth song in is “Evil Twin”, this one is a little calmer off the get go with the vocals and guitar complimenting each other. This track maintains a bit of a lower and slower pace throughout which is nice not just to breakup the intensity of the album but it’s also easier to focus on the intelligent and thoughtful lyrics.

The fifth and final song on the album is called “Defcon” and it’s the heaviest track out of the bunch. Pounding drums and ripping guitars start this one off and make it seem a little on the darker side, the vocals compliment this too. We’re treated to a wicked guitar solo about two thirds of the way through which I wish there was more of throughout the album because there is definitely some very talented guitarists in this band!

Overall I really enjoyed listening to this EP! Secondhand Habit have a great sound going and are intelligent lyricists. Their instrumental prowess is also evident and I’ve got my fingers crossed that I can see them live soon!