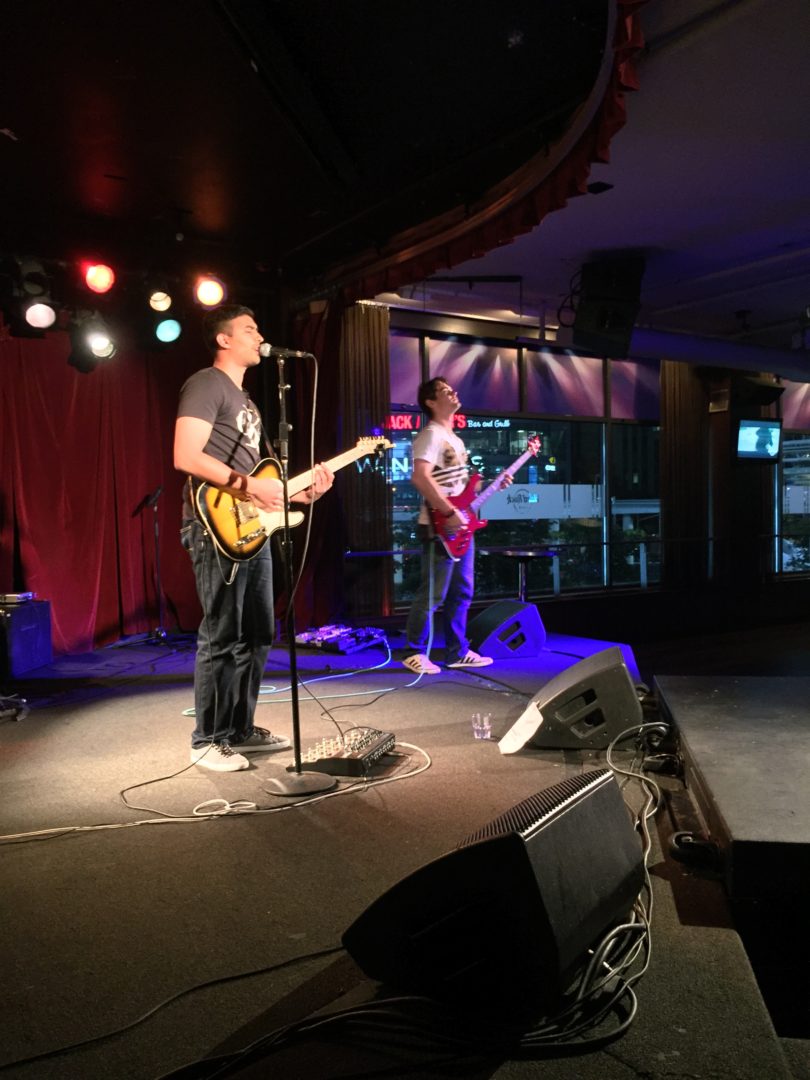 Toronto based, Black Creek Reign is no stranger to the Toronto scene, they have toured around the city playing notable venues such as  the Silver Dollar Room, Opera House and even the Hard Rock Cafe. Darren Armoogam and Lex Stultz are working on a track with hit songwriter-producer Mark Zubek of Zedd Records and we are glad that we had the chance to ask them a few questions for our newest segment of Five Questions With. Enjoy!

Hey guys and gals! We’re Black Creek Reign, a pop band with a dash of reggae and a touch of acoustic. As of right now, we’re a singer-songwriter duo, with Darren Armoogam heading the guitar/vocal duties and Lex Stultz handling the bass. Both are 26 years old and born and raised in Toronto.  We’ve been performing live for over a year now and have been apart of great gigs at places like The Opera House, the Horseshow Tavern, the Silver Dollar, and most recently we helped to close down the Hard Rock Café by performing at the Final Show.

We personally like to blend all of the styles that have influenced us, like reggae and blues for Darren or country and rock for Lex, and fuse all of that underneath the pop songwriting umbrella. In short, we like making unique music that’s still catchy and radio friendly, but that has character and depth to it. Graduating from York University’s music program gave Darren an excellent sense of melody and harmony, while Lex’s acting/script-writing prowess gives him the know how for the lyrics.

As of right now, no. We’re looking for a drummer to replace our old member Pavel Hossain as he has to go back to Ottawa, so we’re focusing on studio recordings and songwriting sessions. You can keep up to date with us on Facebook though to see all our latest bookings, we’ll be back in July for sure! As for our live performance, we’re a very simple band. We laugh with the crowd, crack jokes, sing crowd favourites along with our originals, and just make sure everyone has a good night listening to great music.

While the process has been set for the iTunes/Spotify release, we’d recommend listening to our brand new single “You Don’t Want This” which was co-written by our friend Mark Zubek of Zedd Records. It’s a latin/acoustic pop track with lots of catchy fills and a very memorable hook that’s bound to have you singing along by the final chorus. Find it on SoundCloud in the meantime! Just search for “Black Creek Reign”

We’re big fans of “Magic!” as we love the reggae-infused pop that they make, it’s very similar to our sound! We also love Dean Brody, Justin Bieber, Shawn Mendes, and even though they get a lot of hate, good Lord do Nickleback know how to write a good song. We’d also like to shout out our friends Kasador, Across The Board, Alex & The Flood, and TheMidnight Echo, all of which are doing great things in the scene and have helped us get to where we are today.