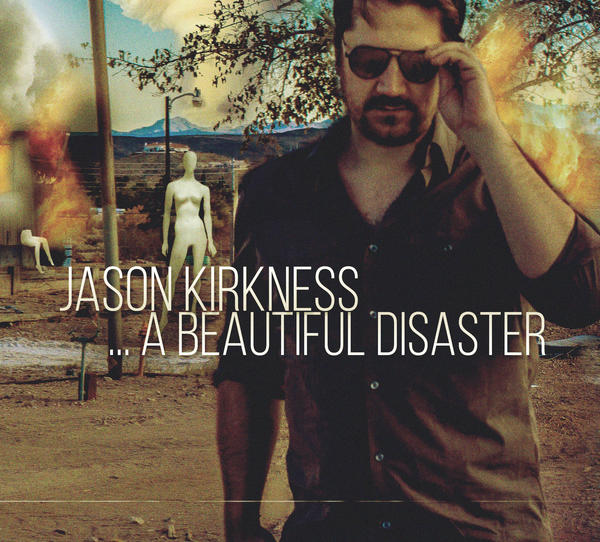 Jason Kirkness, who now calls Winnipeg, Manitoba, home has released his much-awaited album, A Beautiful Disaster. This album started out as a follow-up to his 2011 album Life on the Road. Be that as it may, life happened and things turned out badly in his own life. Instead of wallowing in self-pity, this talented singer-songwriter put to pen all the negatives and turned them into positives. Due to some health and life issues, Kirkness wanted to put some real perspective on everything in his life and that meant putting his music on hold for a few years.  So, this album was almost five years in the making. He says this of A Beautiful Disaster,

“Every song on here comes from a really personal place. I think that I pushed myself into about the darkest places in my soul on “One More Fix” and into some of the most-romantic places in “Man Like Me.” I really wasn’t worried about making hits or singing about the typical subject matter in country songs, I just wanted to be creative and make something that I loved and was proud of as a whole. Even the cover art is super cool!”

A Beautiful Disaster has a variety of sounds in it. According to Kirkness,

“Some of it sounds like 90s boy band music, some very traditional honky tonk sounds, some kind sounds like 80s hair bands and I guess I fit into the part of the genre that has an honest rocker/singer/songwriter musician vibe.”

This is the quintessential summertime, sit by a bonfire and listen to album. It has happy and playful, sexy and tender, gritty and adventuresome, soulful and sad, all    c in one collection. Many of his long-time fans will recognize most of the songs on this album as Kirkness has performed them live over the years (a fan favourite is “ It’s What I Like About U”) but there’s now an upbeat vibe to many of them. His vocals are superb and his upper register is spot on. Kirkness produced the whole album with help from Sean Power at Hilson Studio in Nashville, Tennessee. The two of them play most of the instruments as well. When you listen to A Beautiful Disaster, you’ll realize that these two are quite a duo – they have great chemistry and that’s what makes an extraordinary album. Jason Kirkness recently signed with Edge Entertainment, a management company based in Portland, Oregon.

There are so many excellent songs. From “Take Your Picture” to “Good Life” to “Tall Glass of You” to “Barefoot,” this album is the essence of whom Jason Kirkness has evolved into. His life is a beautiful disaster. My favourite though is “One More Fix.” A love lost is heart wrenching and he brought it all home in this song. It had the most impact on me than any other song on the album. I actually felt the pain that this gentle soul went through writing this song. His new single, “Whiskey Kiss” is also a great song. It “hauls major ass, it’s catchy as shit.” And, to have Kirkness’s version of Johnny Cash’s “Folsom Prison Blues” on the album is the thing that adds to what makes this album cool.

A Beautiful Disaster is a great album and it’s one that you should add to your collection.