Five Questions With The Huaraches 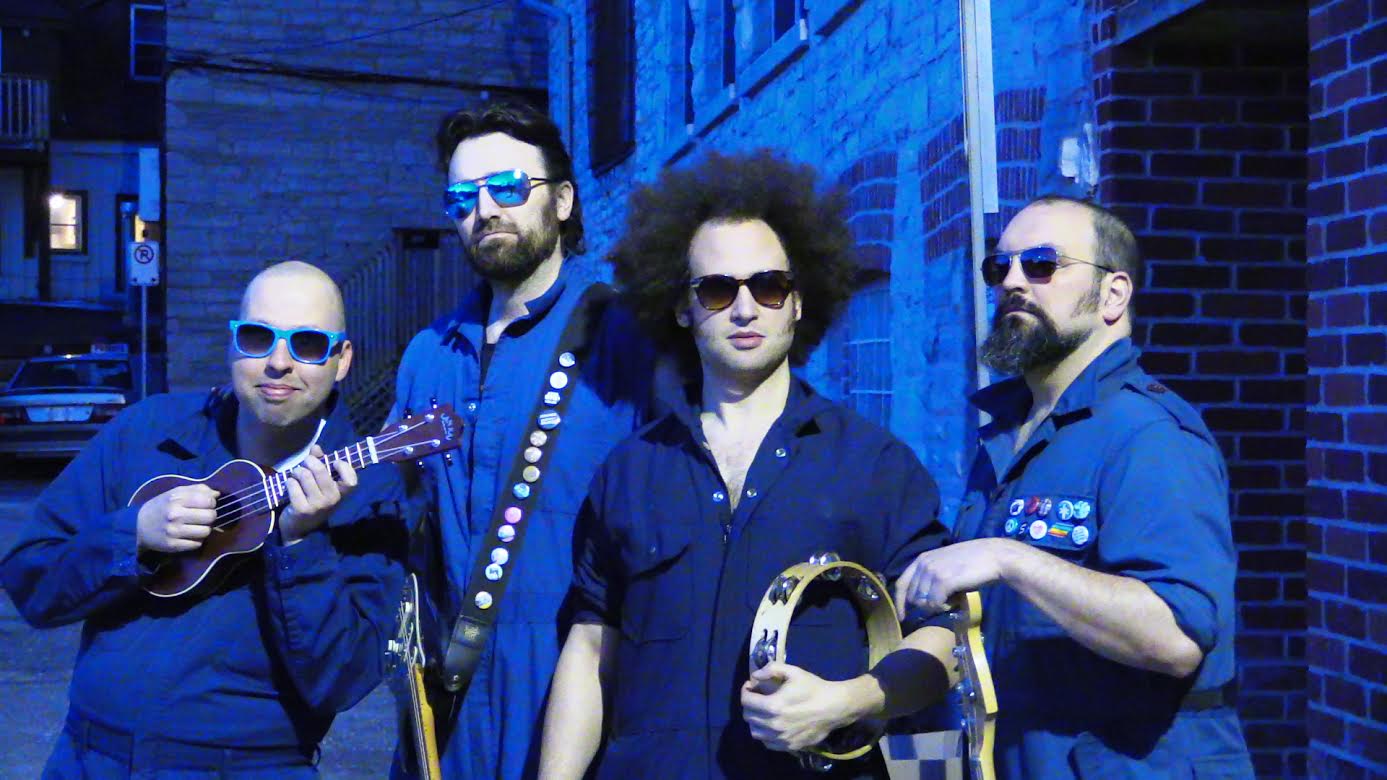 During CMW this year I was lucky enough to be assigned to work at the iconic Bovine Sex Club as a volunteer for the week. The week couldn’t have gotten off to a better start than with Kingston’s The Huaraches. The moment I peeked my head around the corner and saw luchador masks and hula skirts I knew I had to hit these guys up for an interview and luckily for me they were happy to oblige. Ladies and gentlemen… enjoy.

Howdy, readers! We’re The Huaraches (say “Hurrah-Cheese”) from Kingston, ON. It’s Adam and Cuz on the guitars, Daniel & Steve on drums and bass, and sometimes Miss Mae OhMy and ELE Incognito dancing.

We play instrumental surf punk and live for putting on a good, fun show.  None of us have ever actually surfed, but Adam tried a boogie board once. If it’s any consolation, Cuz is an above average bowler. Dude just walked into Cloverleaf Lanes yesterday and rolled a 160 while waiting for his oil to get changed. The rest of us can’t bowl for crap.

Tell us a bit about your music and writing style:

We take the spirit of instrumental greats like The Ventures, Shadowy Men, The Meters or Link Wray, add jumpsuits, reverb and impunity, and have fun. Our goal is to create evocative, short, high-energy tracks that tell a story without the need for words other than the occasional , “Hey, Hey, Hey.”

The music is a true team effort – we write together in our jam space, supervised by our spiritual adviser, a very large dog named Frank. The interplay between two guitars, a bass and some drums drives the tunes. We create melody and groove with call and answer riffs and dramatic dynamics. Really, we just aim to make each other smile each Tuesday night at the jam spot and see what comes of it.

We’ve just finished a run that included some incredible shows and experiences at the Bovine for CMW, a trip to Waterloo to play with our good pals Jean Daddy, and we’re gearing up for a fun summer.

On June 2nd, we’re joining up with our studio-mates Oh Susanna, Rueben DeGroot and a local craft brewery Stone City Ales to celebrate the release of albums by Suzie and Ruben along with “North of Princess Ale” – a feature brew named after our little neighbourhood and the studio that’s at the heart of its sound. https://www.facebook.com/northofprincess/photos/gm.1953419058277996/1688832784466874/

We’re gonna play a Roller Derby Bout later in the summer, The Mackinnon Bros. Beer “Back to the Farm”  Festival in Bath, The Red Hot and Blue Rockabilly Festival Surf Cruise in Brockville, and the Surf & Turf festival in Ottawa along with some club dates in southern Ontario.  Mainly, though, we’ll be working hard on our third record “Curl Up with The Huaraches” so we can release it this fall and get out on the road.

We put on a show.  It’s visceral, it’s high energy, it’s designed to break down inhibitions so we can join the audience in some good ol’ fashioned rock and roll abandon.  Think James Brown versus the Ramones in a wrestling match, fueled by sweat, riffage, and the energy of our crowd. On any given night the act could include Lucha Libre go go dancers, a pinata or two, therapeutic hug sessions, and/or a machete. We have fun and hope it’s contagious.

If you were asked to suggest just one of your songs for someone to hear, what would it be?

As much as we’re proud of our tunes, if we had just one suggestion, it’s The Ace of Spades by Motorhead. Just listen to it right now.

Then, and only then, should you watch our Video for “Saucy” from our first record. We chose this one because the video was shot in our local community radio station CFRC 101.9, features our Recording Engineer Zane Whitfield in an oscar worthy performance as DJ L.O.V.E. and captures the humour, energy, sound and experience we want to provide pretty well:

There are too many to list, of course.  For good instrumental surf music in Canada right now, you can’t beat The Reverb Syndicate from Ottawa and Luau or Die from Toronto.  The Sadies are forever in our minds and hearts. B.A. Johnston is forever our livers, and generally living up to his hype as the “Stompin’ Tom Connors of our generation.” – Globe and Mail.  We dig our blood brothers Owl Farm and the Orange Alabaster Mushroom from Kingston, The Dudes, Tuns, Fucked Up, and so many others.