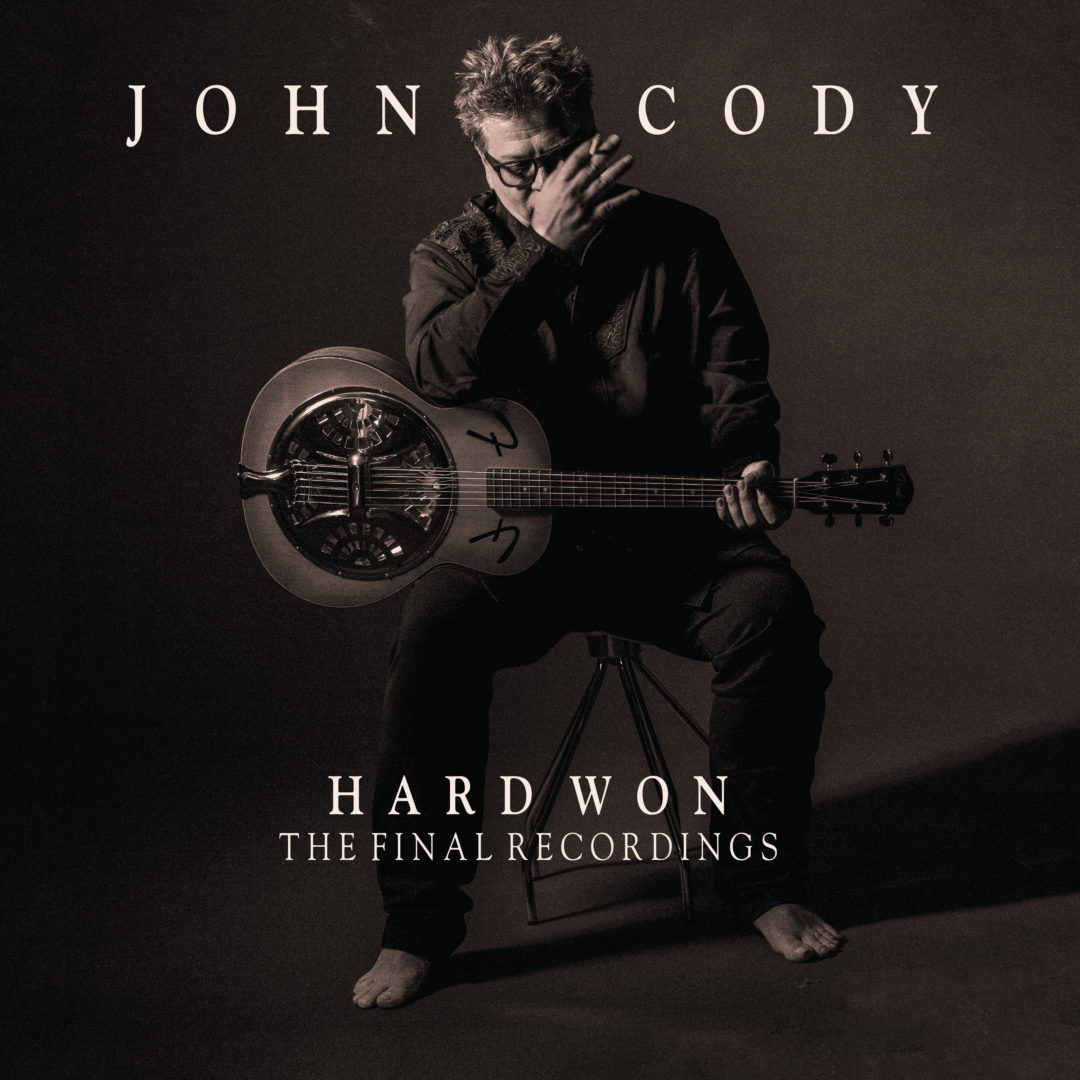 The cover art shows a man sitting on a stool, an old blues resonator guitar on his lap, appearing to adjust or compose himself, cigarette in hand, bare feet on a black floor.  The picture promises poetry, a stark telling of true tales and heart worn stories, tested and tried through experience and glamour and grit.  At first one is wondering is he adjusting his glasses, wiping away a tear, or catching himself in a brief, off-guarded emotional moment.

The man in the picture is John Cody, and this is the cover for his latest, and last album, Hard Won: The Final Recordings.  Knowing this is Cody’s last album, knowing his larynx will be removed after receiving a devastating larynx cancer diagnosis, it is understandable to think that any noticed emotion is real, that the man we are looking it is facing the end of his career and, instead of giving into defeat, follows the advice of William Ernest Henley’s “Invictus” to be the “master of [his] own fate.”

Before listening to the album, pause and reflect on the experience to come.  Unlike many musicians who are taken from this molded mortal mud unexpectedly, Cody created an opportunity to finish this last project, to leave one last mark on an already remarkable career, and leave audiences with a final message, instead of a final mystery.

A little mystery, however, doesn’t hurt.  His bare feet are connected to the black floor grounded like roots to the Earth, keeping himself solid, powerful, facing the inevitable vocal loss without bowed uncertainty.  John Cody doesn’t come across as a barefoot performer, as one would expect to see on a folk or old school bluegrass album.

Perhaps, instead, it is a nod to Sir Paul McCartney and the litany of “Paul McCartney is Dead” conspiracies, “proven” by his bare feet apparently hovering above the cross walk of Abbey Rod.  Cody is facing the end of his singing career and may be having a slight nod to the great “dead” Beatle.

Cody, however, unlike his conspiracy theory counterpart, is the “captain of [his] own soul” and, knowingly, despite the hardships to come, “out of the night which covers [him]”, Cody kicks his impending vocal loss straight in the jaw, blues-rock man kung fu style, creating a terrific album.

(Yes, I realize it is a stretch to think Cody purposefully has bare feet as a death homage to McCartney, but the analogy was too good to pass up, much like the bad pun appearing later on in this review.)

Hard Won: The Final Recordings hits all the right notes, and a few wrong ones (no, there were no wrong notes, but the pun was too good to pass up and, based on the album title, Cody would appreciate the word play), displaying Cody’s musicianship and keen professional ear.   Song to song, listeners are taken on a musical mosaic, a pattern of influences creating the record and reliving a substantial songwriting career.

Opening with “Freedom in a Cage” the tracks starts with this amazing, industrial beat, mash/up Hammond sound before a complete cut going into the first verse, a strong, straight ahead rock tune with sparkling background vocals.  Brilliant production compliments the arrangement with a solid groove ornamented with changing feels and room for fills.  The tune cuts suddenly at the end, just as in the first seven seconds, throwing listeners immediately into the deep end. There is a sense of necessary urgency in Hard Won, there are stories to be told and they need to be told now before it is too late.

Vocally, Cody is a mix of a tonal, calmer Art Bergman, Elvis Costello’s personality and phrasing, with moments of Leonard Cohen dynamics and theatrics.  Cody is comfortable using his voice in various registers and tones creating an added layer of depth to his vocal melodies.

“The Devil’s Radio” is another driving rock tune, with a mixed feel between sections, and layered vocals.  For a song under three minutes, it is a dense, non-confined song with a lot to tell.

“It’s Not Bound to Calm Down” explodes with a groovy drum fill, a sonic blast of instruments, and a fuzz bass line that puts Jack Bruce’s bass sound to shame.  Cool drum effects with a back-beat/echo of the snare in the background of the overall mix.  The track is consecutively gritty, dirty, funky, and sublime.  First appearance of a horn line for nice tonal variance.   A tinge of Matthew Sweet vocals, guitar sounds, and vocals cerates another sonic palate while retaining the album’s overall style…and it’s only the third track.

“The Road is Long” is the first acoustic-oriented, reflective sounding, guitar tune.  Even acoustically, there is big bass sounds and well-produced percussion.  Sound is never wasted.  Vocally and instrumentally, everything is sophisticatedly placed and wonderfully heard.  Lyrics like “How does it feel / when nothing’s for real / can you tell what’s coming down” is prophetic and telling; Cody knows what is “coming down” even though the long road ahead is still untraveled with all its trials and possibilities.

“Cheers (Thanks A Lot)” is the best Elvis Costello song he hasn’t written yet.  Intimate vocal intro and piano draws listeners and keeps them captivated.  The song is sentimental, sweet, and dark, a love song performed in a smoke-filled jazz club after the crowd has gone home and the band stays behind.  The string lines give an early Hollywood soundtrack vibe like La La Land should have purchased the performance rights.

I continue writing a play-by-play of the record before realizing, given the 16 tracks involved, and the tone of the review thus far, listeners can be assured of a brilliantly played and performed record, the kind of album any artist would be proud to be a part of, whether it is the last record or not.

(At this point, I decided to forgo the fear of over-writing this review as it is happening.  Cody would approve.)

Recording cover tunes can be a perilous endeavor, when mixed with original songs, as music audiences can be fickle regarding the interpretation of their favourite songs.  Audiences seem to like their covers exactly like the originals, or completely reworked and revisited following the new performer’s musical perspective.

When artists in different genres can do heartfelt, creative, awesome covers of a beloved song with sincerity and without eye winking, one should be complimented.  The onetime band Hindu Love Gods (R.E.M. with Warren Zevon on vocals) recorded an amazing version of “Raspberry Beret”, which sounds exactly like R.E.M. with Warren Zevon singing, and here, on his final album, John Cody does the same with a slowed down, heart-wrenching acoustic version, with solo electric guitar, of “Little Red Corvette” being performed live to add to the closeness and intimacy of the tune. Sassy and gritty, Cody’s version of “Little Red Corvette” turned the original speedy pop tune to a slow drive through dark lit downtowns passing ne’er-do-wells and seedy blues bars.

Without giving too much more away, there is a cover of “Hallelujah” that, given the circumstances of the album, seems obligatory.  For a song that has been covered and re-covered, it is nice to hear another spin to Cohen’s original song.  Cody’s version gives a blues / jazz style with solo voice and big piano chords.  Emotionally, Hard Won’s “Hallelujah” has more emotional impact than the John Cale version, with Vince Guaraldi piano licks, cooler chord substitutions and a well-placed pedal stomp.  Be prepared to hear Billy Joel comp this version on his next cover album.

“Back to California” is an enigma of track, a mix of 70’s jazz and modern rock, expertly jammed and darkly chorded, a reunion song holding secrets, the trip back doubtful and successful, hesitant and triumphant, mournful and celebratory.

The album’s closer “Cut to the Bone” asks the question “what do you think will hurt the worst / your death or birth” leaving answers to debate over long walks, a bottle or wine, or straight drinks with friends.  Reflected but not remorseful, Cody finishes his last album with thoughts and observations, and the desire to recognize the “wicked this way comes” without dismissing, or demeaning it, to accept what is and find a way to reach a conclusion, to finish what needs to be done and resolve, if possible the “synthesis of opposites.”

Of his final album, Cody says, “For me, this record was about being able to make my last statement. It’s a chance to say thank you to the incredible artists I’ve worked with over the years, my friends, supporters, and fans.  From recording the first song to the day I completed the album, it reflects the arc of my career.”

Check out John Cody’s website, http://johncodytunes.com/, to find his brilliant new album Hard Won.  Or find him on Twitter @johnjohncody.