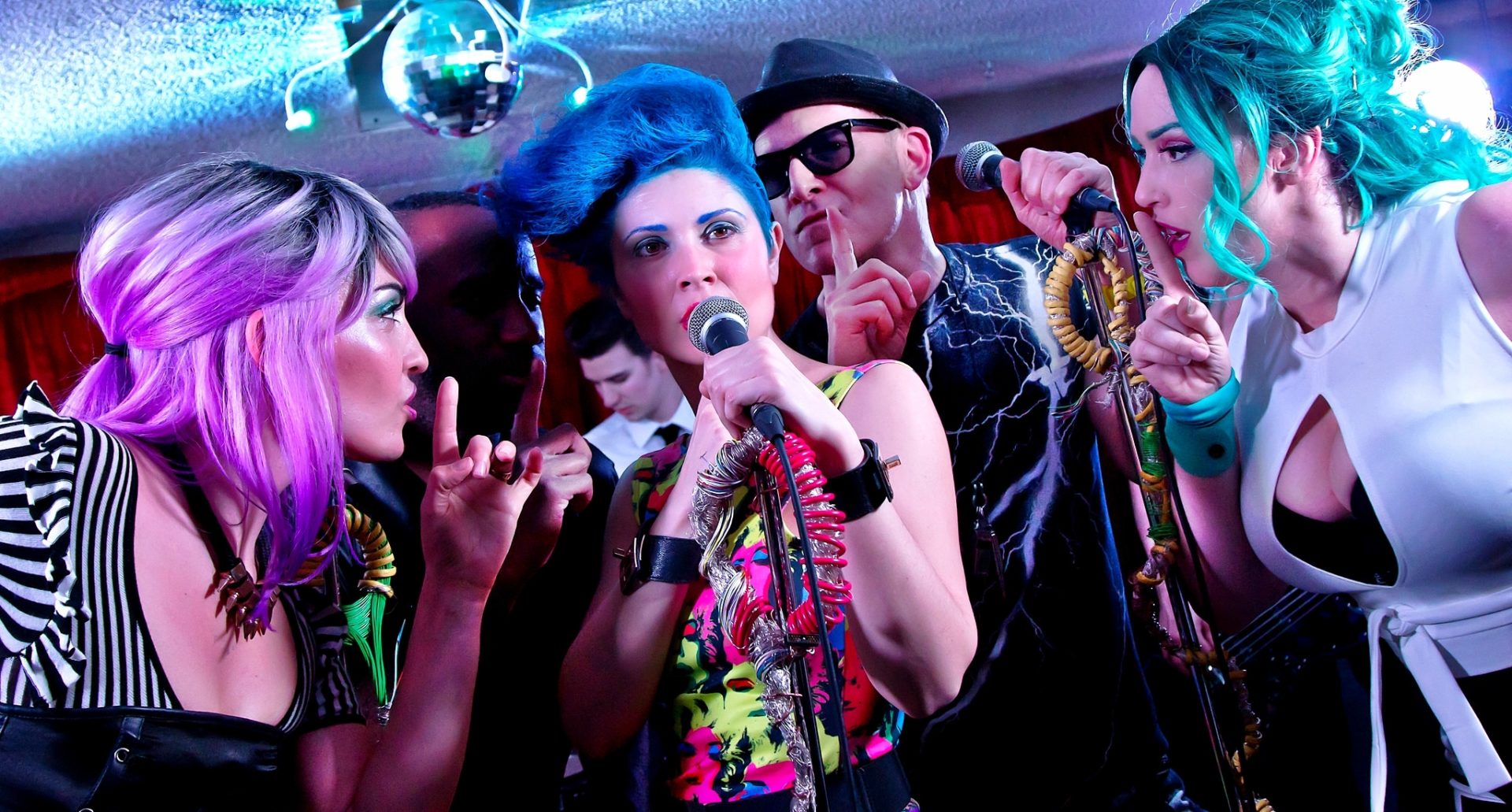 Ottawa is home to the country’s most colourful band, both musically and visually, The PepTides. The band’s theatrical live shows and unique tracks like “Attack of the Treadmill” and “202 Washington DC” have thrown them into the spotlight in recent years. You can’t deny the incredible talent and complete creativity, pulling you in and captivating audiences all over the country. The PepTides have been celebrated by Ottawa Life Magazine, and even had one of their members (Rebecca Noelle) recently finish second on Quebec’s version of The Voice, La Voix. They also had the chance to take over Toronto’s Buddies in Bad Times Theatre and will be doing so again tonight (May 26, 2017). Canadian Beats had the chance to catch up with The PepTides to discuss music, inspiration and recording. Check out what they had to say below.

How would you describe your sound and live show to anyone that has never seen or heard of you before?

What made you chose the band name of The PepTides?

It was actually inspired a documentary on quantum physics called “What the Bleep Do We Know!?” There’s a segment that talks about how the brain processes emotions using neuropeptides. Basically, we are all chemicals addicted to other chemicals.

It’s also just a fun play on words we are here to bring you a tide of pep!

Describe your writing and recording process, being as your nine-piece band is so incredibly diverse.

For most bands, it’s “garage first, studio second.” But with our band, it was actually “studio first, garage second.” In the beginning, Claude, our main songwriter, would write and record songs in his home studio. Then the band would reformulate them into extravagant live performances in our rehearsal space (which happened to be a kooky garage at the time!).

Lately, though, we’ve been playing with the order of operations. We generate new material in large jams, small jams, and even teeny-tiny microjams. Then we bring it to the group and see what they think.

Your songs are pretty unconventional based on what’s on mainstream radio, and so creative. Where do you find your inspiration for these types of songs?

Being self-taught, Claude is pretty comfortable working outside the box when it comes to music and lyrics. The other members each bring something original too, from soul and jazz vocal chops to instrumental licks from our “boys in the back.”

For inspiration, we like to have a theme for every album we create. (Some themes, like LOVE and HATE are pretty far-reaching, but they do the job just fine… very fertile.) Right now, we’re using a novel as the basis for our next album.

What made you decide to take this more unique direction with your music, as opposed to the more generic radio pop direction?

We really like being situated in the pop music tradition. But to us it’s important to build on that tradition too. All artists should try to push their art form in some way, don’t you think?

What are some of your musical influences?

Being nine artists, it’s quite the pantheon! There’s really no directive to imitate any artist in particular, but we do celebrate and honour the people who have moved us creatively.

If we were to make a cocktail for you, though, we would throw Bowie, Bacharach, Badu, Bach, B-52s, and the Partridge Family into the blender. Would you like us to make you a cocktail, Canadian Beats? How’s about it?

Describe your EP in three words.

What can we expect next from The PepTides? (tour, full length?)

Apart from this convoy to the big mainland East Coast cities (sorry, Newfoundland—we’ll catch you at Lawnya Vawnya someday!) we’re looking forward to the Festival d’été in Quebec City and the Ottawa Jazz Festival back home. These shows are a great chance to see us up close.

Meanwhile, we are deep into creating our next LP inspired again by another book, this time a satirical novel. Stay tuned!

Here at Canadian Beats we like to include a ‘Just for Fun’ portion of our interviews to help your fans and our readers get to know you better. Ready!?

Rebecca Noelle recently placed second on Quebec’s version of The Voice (La Voix). If you were on the TV show The Voice, whose team would you choose if all the chairs turned around?

If all the chairs turned around, there would be nine PepTides charging and pouncing on the chairs to frantically swivel them round and round. The resulting mayhem makes this question impossible to answer.

What is your favourite 80’s jam?

Where do you get those badass stage outfits?

Generally the women’s section, both for the ladies and the gents. Sometimes our sewing machines.

If you could put together your own Canadian music festival, who would you place in the lineup?

Well, we’ve always admired bands like The New Pornographers and Tegan and Sara. But honestly, there’s so much unsung talent in this country, and so much of it is world-class. So if it were really up to us, we would program some of the great emerging acts and beautiful souls we’ve had the pleasure of performing with, starting with Moonfruits, Ghostly Hounds, Briga, and the Ramblin’ Valley Band.

What do you have on your current playlist that you just can’t get enough of?

On the playlist today, we have Aimee Mann’s album Mental Illness.

And last but not least, do you have anything you would like to say to your fans?

Thank you for coming as you are. We wouldn’t change a thing about you!