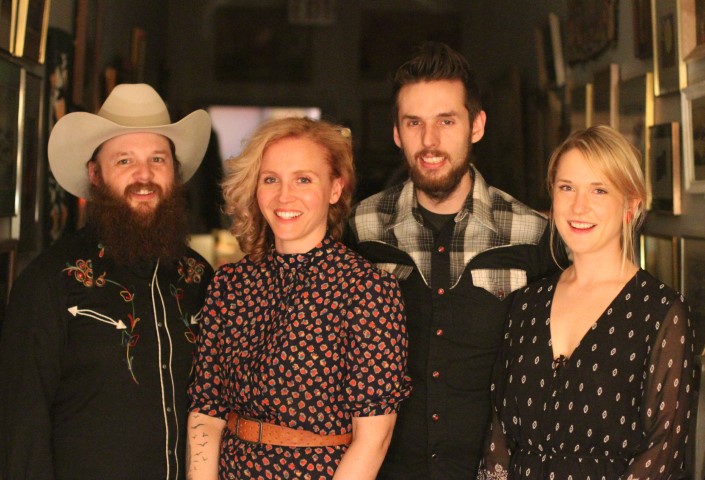 This August long weekend (August 4-6),  Gravenhurst, ON is the place to be. Of course I’m speaking of the inaugural Sawdust City Music Festival. In an effort to showcase some of the great talent taking part in the festival, we are doing a series of interviews throughout the next few months. First, we spoke to The Julian Taylor Band and now, we are happy to chat with Bet Smith of Bet Smith & The Currie Brothers. Enjoy!

Hello, Canadian Beats readers. My name is Bet Smith, and I’m in a band called Bet Smith & The Currie Brothers, based in Gravenhurst, Ontario.  I write and sing tunes inspired by the bewildering world we live in, and my wonderful bandmates, Sarah Girdwood, Rob and Andrew Currie wrap those tunes up in swelling, driving, unexpected sound.

It’s very cool to be included among such amazing artists, and it’s also very exciting that a festival of this caliber has come to our hometown. We’re really pleased to be opening for Harrow Fair and the Jim Cuddy Family Band at Gravenhurst’s gorgeous Opera House, and we’ll be soaking up the great music at other venues all weekend.

I have been loving Abigail Lapell’s work lately. It’s so beautiful and understated. I saw a very short set of hers in the fall and I’ve been wanting to hear her play again. Also, I’ve been meaning to see NQ Arbuckle for years, and I haven’t yet had the chance.

We’re recording a new EP this summer, and I’m building myself a small workshop. I went to school for blacksmithing, and later became a welder. You’ve got to have a backup plan, right?  The Currie Brothers own a fantastic vintage music shop in Gravenhurst called, “Currie’s Music” (all of our titles are so inventive) and they will be running around like crazy, as usual, so we’ll be saving most of our touring for the winter. Sarah will be making her way around the beer festival circuit for work… if you bring her pizza she might sing for you. Does that count?

We’ll be releasing a new single soon, called Tight Ropes. I’m stoked. I think it’s our best work. We recorded it in a friend’s giant cottage and made use of the natural reverb for a very epic sound. It will be followed by an EP, also called Tight Ropes, which will be a partner to our first EP, Loose Ends. We will be working on the final few tracks for the new EP throughout the summer.