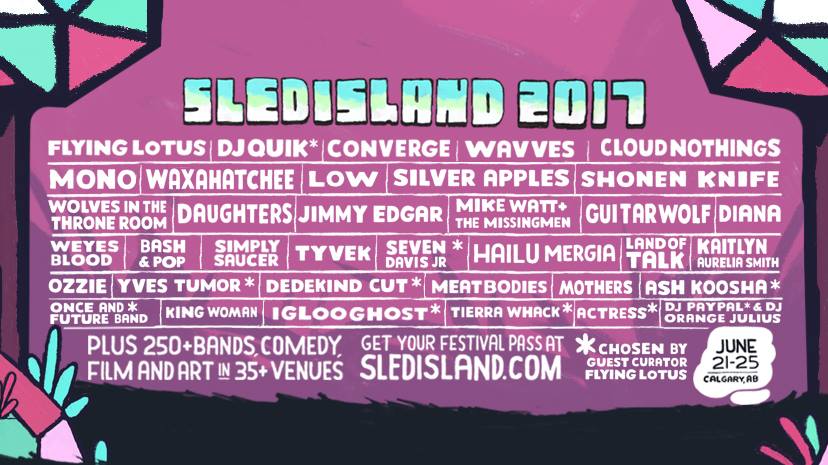 The Countdown to Sled Island is on! Unless you’re a Calgary resident or follow Canadian music religiously Sled Island is probably a name you haven’t heard. Since 2007 Calgary has been home to a music and arts festival. This festival spans five days in June, and includes hundreds of international, national and local bands, comedians, filmmakers and artists. Over 30,000 attendees take over more then 35 of the local venues targeting almost ever genre possible. This year marks the Ten Year Anniversary, and who better then Flying Lotus to join the Guest Gurator’s from previous years including Peaches, Godspeed You! Black Emperor,  Andrew WK, and Mark Hamilton.

Narrowing down my picks for this years festival was a challenge but I managed to do it!

#5.  Melted Mirror is local to Calgary; Melted Mirror fuses electronic with a post-punk and pop feel. Need a break after work and want to chill out to some music check out these guys.

#4. Hailing from Olympia, Washington is Wolves In The Throne Room. Since their start in 2003, this black-metal duo (along side session and former musicians) have been perfecting their heavier style while taking risks and exploring the atmosphere of doom and various metal styles. Most notable, their newest album Celestite (2014), which was purely an instrumental album focusing on more ambient styles, which strayed away from their earlier work. Fan of metal, but need more then just the basics, check out this one.

#3. Little Destroyer from Vancouver. This three-piece band brings the rebel out. Though new to the scene, this band has already made a name for themselves with their heavier electronic-synth and pop anthems. I guarantee you’ll be dancing all night. As it’s another band that isn’t easy to describe unless you’ve seen them live, but also a band that won’t disappoint.

#2. Hailing from Ontario is Deathsticks, bringing back the good-old garage days. This power-duo drives off stress and sarcasm, never takes themselves too seriously and get up right in your face with blown-out drums and guitar for a wild good time. Need to reminisce on your days in the garage? Check this duo out.

#1. My number 1 pick is none less then the metal-core pioneers Converge! Converge is one of the bigger acts during the festival this year. Knocking out eight-albums since 1994. Hailing from Salem, the band isn’t stopping their heavy pummeling sound. Originally I had picked to put Converge first because I’ve always been a fan of their heavier style, but to truly understand why the band has developed a cult following, they need to be experienced live. Similar to the smaller intimate shows of Touche Amore and Deafheaven, this one is bound to sellout.

Need more to satisfy your artistic side? Sled Island also features comedy from Bobby Warrener, Carina Morton and others. As well as art from ACAD, and other various special events such as the Legendary wrap-up Karaoke and Punk-Rock Bingo. The festival is also is know for their films, including this year the Canadian premier “Cassette: A Documentary Mixtape”. This documentary dives into why cassettes have stuck around as form of media as long as they have.

As I hadn’t covered certain genres, don’t fret! Sled Island has got you covered. Checkout the rest of the lineup and pick up your festival passes at http://www.sledisland.com/. Also don’t worry if you are unable to afford the full five-day pass there are packages available as well and individual tickets.