5 must see bands at the CBC Music Fest 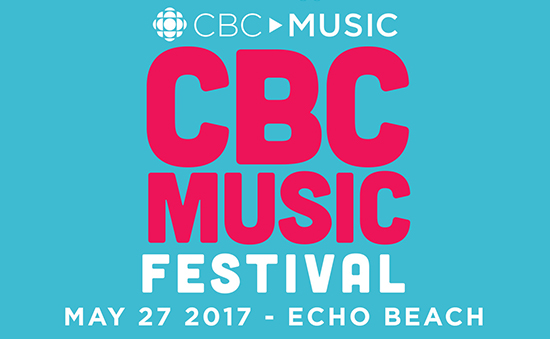 The CBC Music Festival takes place at Echo Beach in Toronto on May 27,2017 this year. It features an already impressive line-up which by the way is 100% Canadian.

5. Keys N Krates are a Canadian electronic music band formed in 2008 out of Toronto, Ontario. The group consists of drummer Adam Tune, keyboardist David Matisse and turntablist Jr. Flo (Greg Dawson). The band started as a live hip-hop act reliant on rough acapella loops on top of heavy bass-driven beats, and have since become a tight-knit trio of producers/performers.

4. Sarah Slean over the course of her 15 year career has made eight albums, starred in two short films and a movie musical, published two volumes of poetry, held exhibitions of her paintings, written two string quartets, and shared the stage with five of the country’s leading orchestras. During that time she was nominated for three Junos, two Geminis, and her records have been released in over 10 countries world-wide.

3. Bobby Bazini  When the time came to craft his second album, Bobby Bazini took the trip of a lifetime when he grabbed his guitar, packed up his car and left a small Montreal suburb for the Golden State to record with legendary producer Larry Klein. Five days later, he was in Los Angeles having breakfast with the iconic producer and jumping right into the recording process at the renowned Village Recorder that has hosted some of Bazini’s heroes – Bob Dylan, Marvin Gaye and Johnny Cash. Where I Belong was recorded with a studio filled with some of Bazini’s favourite musicians including, Booker T (organ), Jack Ashford (percussion) and Jay Bellerose (drums). What resulted is a collection of live-sounding Folk/Country and Soul songs.

2. Walk Off The Earth are one part folk-pop, one part sketch group, and one part quirky musical experimenters, Canadian band Walk Off the Earth formed in 2006 in Burlington, Ontario. Made up of multi-instrumentalists Ryan Marshall, Gianni Luminati, Mike Taylor, Joel Cassady, and Sarah Nicole Blackwood, the band has become known for its innovative cover songs, which feature the group members trading instruments with one another midsong or elaborate one-take performances where the song is built piece by piece by a single member playing every instrument.

1. Serena Ryder was born and raised just outside Peterborough in Millbrook, Ontario, songwriter Serena Ryder grew up listening to old Beatles and Leonard Cohen records that she found in her parents’ collection. She started singing publicly as a young child and, having received a guitar from her father, began playing the instrument at the age of 13. Songwriting efforts followed. In 2002, the 18-year-old took several recordings from a live Quebec performance and packaged them into an official demo, which eventually made its way to CBC Radio and got Ryder an invitation to perform on-air. As luck would have it, musician Hawksley Workman happened to hear the broadcast, and immediately contacted the singer at the station to invite her to record an album on his Isadora label.

Stay tuned to Canadian Beats for all of our coverage of CBC Music Festival.