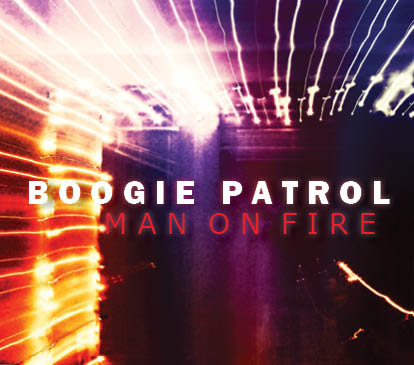 5-piece Edmonton band Boogie Patrol are serenading audiences with their newest album, Man On Fire. Soulful, true-to-their-roots, and rhythm-heavy, the 10-track album delivers a sizzling combination of jazzy instrumentals and throaty vocals. The result? Tracks that will wow both Blues veterans and new casual listeners alike.

“Players Blues” is the song that pulls back the curtain of the album, kicking it off with a horn-laden, 70’s-inspired extravaganza. Classically catchy and atmospheric, “Players Blues” is a New Orleans-style toe-tapper that begs for listeners to let their hair down and soak in the bluesy throwback of the instrumentals.

Same-titled “Man On Fire” barrels onto the scene late into the album, shining a focus on the gritty side of the album. With punchy lyrics and lead vocals like the later Paul Weller’s, Boogie Patrol shows off their diverse sound and instrumental mastery in one solid track.

Soulful, classically appealing, and explosively put together, Man On Fire isn’t an album to be missed. Make sure to follow their cross-Canada CD releases and upcoming gigs this summer on their website below.