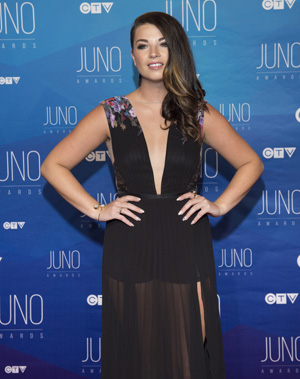 2017 JUNO Award winner and platinum-selling country artist Jess Moskaluke did this week what no other female Canadian artist has done in nine years. She shattered that glass ceiling by cracking the Top Five in Canadian country radio with her current single, “Drive Me Away.”  With hitting Number Three with this single, Moskaluke has achieved her first of many yet to come major milestones in her career.

Moskaluke has many other accolades to her name. She garnered the 2017 JUNO Award for Country Album of the Year for Kiss Me Quiet; she is considered the reigning queen of country, as she is the three-time consecutive Canadian Country Music Association Female Artist of the Year; and she presented with five 2016 SCMA awards, including Fan’s Choice Entertainer of the Year and Female Vocalist of the Year. She also capped off 2016 as the most-played female Canadian artist at country radio. But, that’s not all. Moskaluke also achieved platinum-selling status for her killer hit “Cheap Wine and Cigarettes” – the only Canadian female country artist to do so since Shania Twain.

Moskaluke has this to say about her achieving this status,

“Today, a Canadian female cracked the Top 3 for the first time in 9 years. 9. Long. Years. Let that sink in for a minute. I couldn’t be more proud of Canadian radio for all their hard work in making this happen, and for making a bold statement for the betterment of the industry. Thank you, Canadian Country radio, for proving that females are not the tomatoes in the salad. Thank you, from the bottom of my heart, in the most sincere possible way, to every station who pushed, to every person who requested, and to everyone who gave this small town girl a little bit of hope that she can play in the same sandbox as the boys.”

Jess Moskaluke will be performing at many fairs and festivals throughout the summer. Catch her there.