Westfest returns for it’s 14th year with a stellar lineup 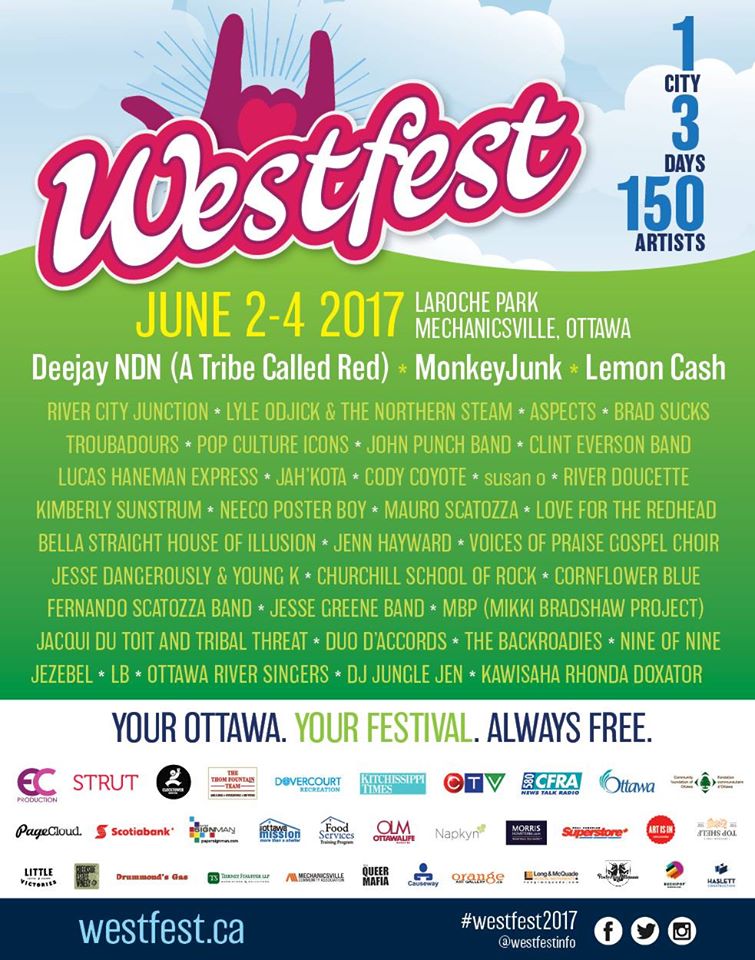 A staple of the Capital’s rich summer music line up, the ever-evolving Westfest returns for it’s 14th year from June 2 to 4, 2017.

In its second year at Laroche Park in Ottawa’s Mechanicsville neighbourhood, Westfest celebrates diversity, inclusion and community through free multidisciplinary art displays, activities and concerts for families of all ages.

Favourite among residents of Ottawa are the free concerts; featuring their hottest and most treasured local artists.

Here’s the three headlining acts, and why they’re important to see during this year’s Westfest.

One third of A Tribe Called Red, Ian Campeau AKA DeeJay NDN is an engaged resident of Ottawa who is donating his earnings for his performance to the Ottawa Coalition to End Violence Towards Women & Project Soundcheck, who aim to keep people safe from sexual assault during music festivals. DeeJay NDN opens the festival on June 2.

With 20 Maple Blues Awards and a famous fan in fellow Ottawa blues man, Dan Aykroyd, MonkeyJunk are celebrated for their hard work ethic and swampy, but soulful, sound.  In addition to least four tour dates in and around the Ottawa region, the band will bring songs from their latest record, Time To Roll, to blues festivals across Canada and the US this summer.  The band hits the stage at Westfest on June 3.

On the heels of their self-titled 2016 EP, and an appearence on CTV’s Canadian Talent Showcase, Lemon Cash are scheduled to bring their indie-fusion vibes to Westfest to close out the festival on June 4.

Related ItemsA Tribe Called RedCanadianDeeJay NDNFestivalLemon CashMonkeyjunkMusic FestivalOttawa ONWestfest
← Previous Story The Red River Ex announces its Main Stage lineup for 2017 and there is something for everyone!
Next Story → Countdown to Pouzza Fest 2017 – Interview with Worst Days Down