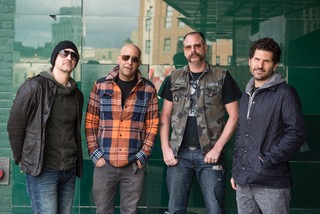 As a fairly new reviewer, long term music performer, and life-long music fan, it is an honour to have the opportunity to review, and interview, and band one has long admired.  When the call was put forth to review the new Watchmen album, I asserted myself twice to get it, and another time or two for the interview.  In fairly well-punctuated fashion, here are an overt fan’s, and now music journalist’s, curious to be answered questions.

What has been the overall fan reaction to the new live album and the album release performance at the Burton Cumming’s Theatre?

Joey Serlin: The response has been incredibly positive. A live release was very overdue, as that is really what the Watchmen are all about at this point in our career. Fans are debating what should have been included but that is a good thing, as it shows how invested our fans are.

After all the years playing, are there any songs that are particularly poignant or personal for the band?  Any that strike a true emotional chord?

It’s more about which songs stood the test of time. Songs like ‘Brighter Hell’ and ‘All uncovered’ are good examples of songs that still connect in both their art and craft.

Discussing the idea that music is a catalyst for music fans’ memories, in my review for the album Live and In Stereo, for Canadian Beats.ca, I say that “Music is the recorded facility to relive life.”  What music in your experience has been the “recorded facility to relive live”, which song(s) or artist(s) creates the greatest amount of personal memories or connection?

For me, there are guitarists and then there are songwriters. So many guitarists time stamp my formative years with music. Jimi Hendrix, Jimmy Page, Mark Knopfler, Pete Townshend, Stevie Ray Vaughn, Eddie Van Halen, bring me back to a time when it was just me and my guitar spending hours in my bedroom. In terms of songwriters, Nick drake, REM, U2, Radiohead. There are too many to mention.

How does it feel now to be the type of band other bands and fans reference – “That track sounds just like the Watchmen” – compared to the up and coming ‘90s Watchmen band from Winnipeg?

It feels great. Having had most of our success in Canada, our legacy and body of work is our reward as opposed to the material success. It is an honour when someone tells you that you were an influence on them.

How did the tradition of the acapella sections of your shows begin?  What is the process in selecting the acapella tunes?

It is all Danny in terms of song selection. As a group, we all like the dynamic shift that an a cappella song  brings to our set. It is also an opportunity to showcase one of the best singers in the country. The crowd really connects with Danny at that point in the night.

Do change up your arrangements during live shows or do you keep it true to the album?

It depends on the song. Certain songs lend themselves well to impromptu musical departures, while others are more detailed in their structure and demand staying true to the original arrangement.

Does the band hold up energy wise better with age and experience or is it more difficult?

I don’t think that we are quite as physical on stage as we used to be but in terms of musicianship, we are better and more confident. It really varies from night to night. The more the crowd gives us, the more we give back.

As a band, how does it feel to have been such an audience who has stayed and grown with you?

It’s amazing. Our fans are so loyal. I can’t believe that we can fly into a city and sell out a decent sized venue with no radio support. We are very fortunate.

What is coming up for the original line-up Watchmen?  New album in the works?

We will play some dates this summer supporting ‘Live and in Stereo’. We have discussed working on some new material in the fall but there is nothing formal booked.

From an avid fan, one time opener, and now reviewer, thank you so much for your time, and hoping for many more years of music to come!

The Watchmen’s new album Live And In Stereo is available now via Fifth Kid Records on iTunes and other online sources.  Upcoming tour dates to be announced soon, so be prepared.