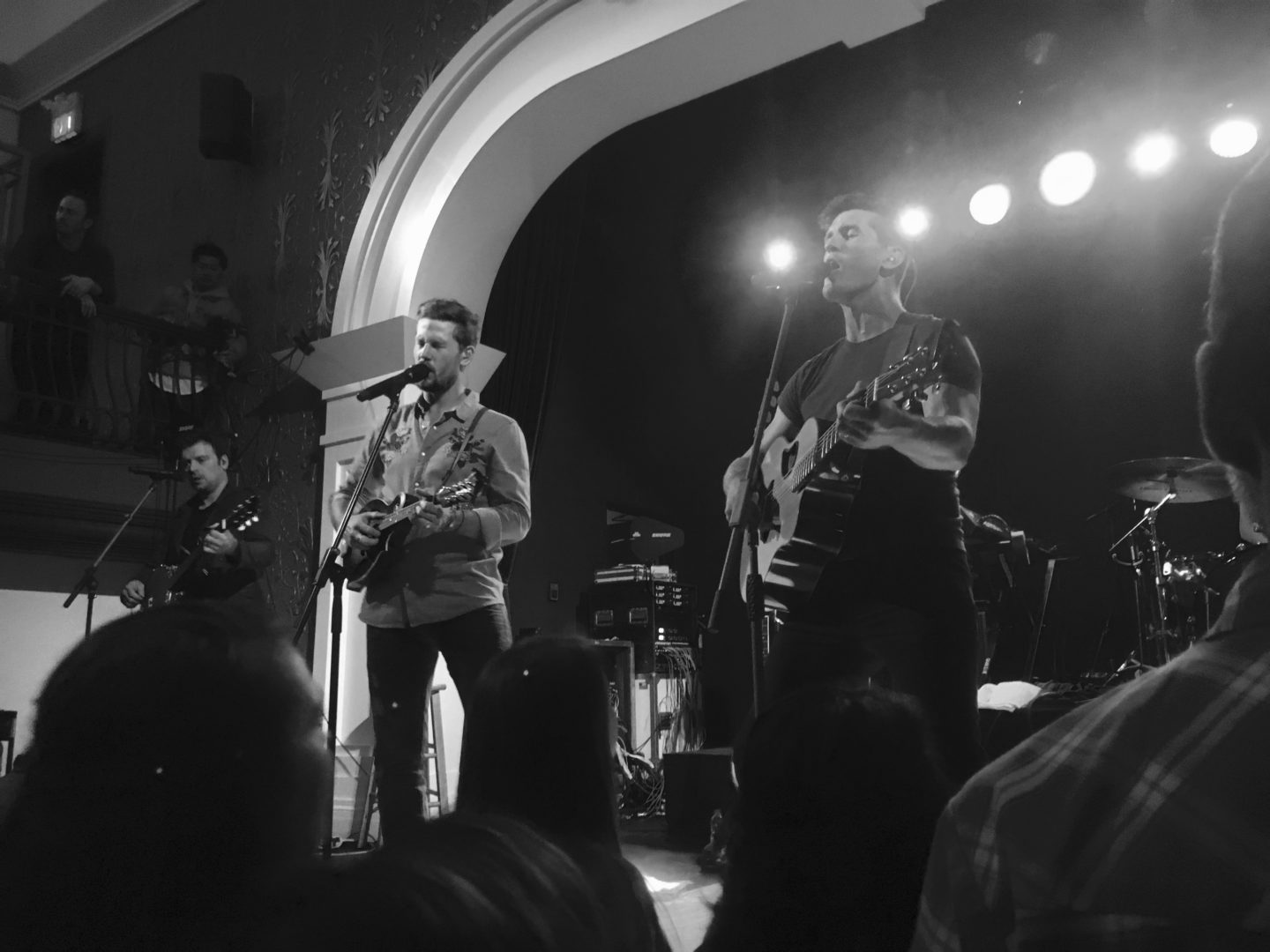 There are two things you need to ensure you have a great Saturday night out: Amazing music to listen to and a great venue to listen to it. Well, we achieved both last night at The Great Hall on Queen West in Toronto. The building on the outside doesn’t look like much, but when you walk up those plush carpeted stairs and into the main hall, it’s a little like stepping back in time. The stage is tiny and so is the space, but that only allows you to get closer to your fellow music fans.

The intimacy of shows is something I’m starting to miss. Sure, like many, I was there in the beginning for a lot of my now favourite artists, but as the years move on and they become more successful, the days of small venues is nothing but a distant memory. All three artists who performed last night are now CCMA award winners, and chart-toppers creating a name for themselves. And they have every right to be proud for what they’ve accomplished because they’re not only talented singers, they’re incredible performers.

Closing out yet another successful year at Canadian Music Week (CMW), SiriusFM threw one hell of a Country party on a Saturday night. Starting the evening off with country cutie Madeline Merlo, who is not only making a name for herself in the music world but also the acting world, kicked it off with all of her radio hits. Right of the bat, she starts it all with “Honey Jack”. Throughout her 35 minute set she sweetened the pot with some new songs but also gave us hits like “Whatcha Wanna Do About it”, “War Paint” and “Over and Over”. Her beautiful personality shines through from beginning to end, all the impressing the audience with solid vocals.

Fresh off of winning a Juno this past March, Jess Moskaluke was next up on the roster. She created a new kind of energy that was uniquely her own. Her strong personality and love for her music shines through. She shows so much passion in what she does and it shows when she’s on the stage. The music can be great, but if the performance isn’t there it can bring the show to a sudden halt. Fortunately for us, that wasn’t the case for Jess. She started and ended on a strong note. Playing all the favourites and some new songs too, she hit a homerun last night. This was my first time hearing her perform live after listening to all hits on the radio and I was not disappointed. Playing favourites like “Elevator”, “Lightning Bolt”, “Kiss Me Quiet”, and her newest “Drive Me Away”, she had the crowd captivated.

Headlining for the first time ever in Toronto, these small Northern Albertan boys ended the night with a bang. The first time I really ever heard of High Valley was back at my first experience with the Boots & Hearts country festival. Sure, I’d heard some of their music before but they never really appeared on my register until I heard them perform live. Sure on the surface they do look like small town fellows, but these guys are top-notch performers. I can’t remember a time I didn’t enjoy seeing these guys perform live, and last night was no exception. They are genuine, kind-hearted country boys who love to share their music with the world.

They’ve been at it for more than ten years, and finally they’re starting to get the recognition they deserve. They recently just signed a contract in Nashville for the US, have a top ten single in Canada, a top 20 single in the US and were lucky enough to even perform on the Today Show! Great things are coming to these guys and I couldn’t be happier for these two amazing people. While their set was only an hour and a bit long, they managed to cram so many amazing songs in that little time frame. Kicking it off with “Dear Life”, they played hit after hit and made the most of that tiny venue. At one point the crowd was jumping in unison, and the next we were stomping our feet and clapping to the beat. I’m sure we were so loud the venue downstairs was wondering if the earth was shattering. Playing favourites like “Make You Mine”, “She’s with Me” and “County Line” and even a few new songs like “Young Forever” and “Every Week’s Got a Friday”.

Closing out yet another successful year at Canadian Music Week (CMW), SiriusFM threw one hell of a Country party on a Saturday night. It was well organized, well timed and everybody had a great time. And a big kudos goes out to all the musicians that performed last night and all those who were behind the scenes. You just made a great night even better.