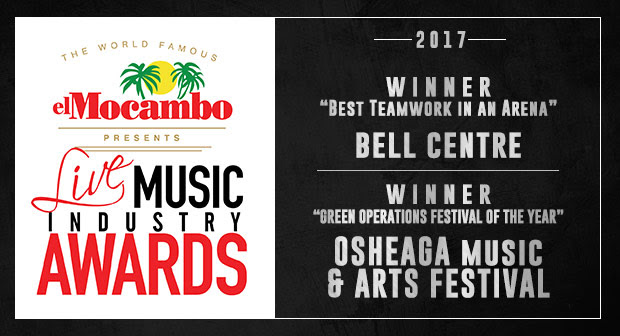 Taking place on April 19th the awards saw many teams who work behind the scenes to make the shows we all love honoured. In this time of increasing awareness about climate change and it’s effect, we here at Canadian Beats were thrilled to see the team behind one of our favourite annual fests, Osheaga, take the award for Green Operations Festival of the Year!

Having attended Osheaga numerous times in the festivals 12 year lifetime I have experienced first-hand the work this team puts in to green initiatives, perhaps the most well-known of which has come to be the offering of reusable beer cups! For your hard work in trying to make sure we you leave more than just a fabulous music legacy for the generations to come, congratulations to team Evenko from all of us!