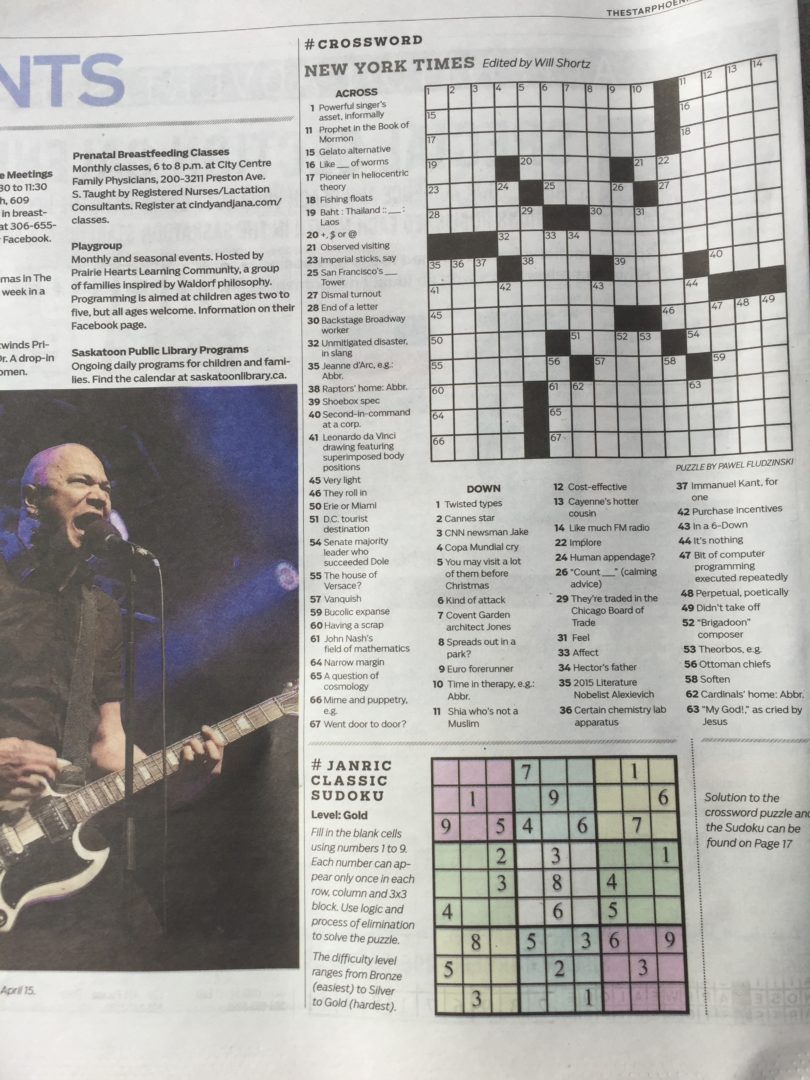 One Line Review:  On this latest tour, Danko Jones, and bandmates John ‘JC’ Calabrese and Rich Knox, prove they are the only honest band in rock.

Hello again, good sir!  It has been ten months since our last correspondence, and I wanted to check in to see how things are with you, your band, your latest promotional tour, and your latest album, Wild Cat.

Is the Danko Jones laundry service in full swing washing, pressing and ironing your, and your bandmates’, black shirts and black pants?  Considering the amount of rock sweat that goes into your performances, and seeps into your clothes, I would think it must be a 24/7 type job.

I imagine the Danko Jones laundry service being like the drug lab in American Gangster occupied by attractive, topless women continually laundering your clothes, waiting for the white rotary phone, with black receiver, to light up, a la Adam West Batman style, declaring another “clean rock-outfit shortage” that must be immediately replenished.

This letter is inspired by having the pleasure of watching your last performance in Saskatoon at O’Brian’s Event Centre, to an eager, and getting ready to get sweaty, crowd.

I was at the front, stage left, wearing an outfit that, declared by associates of mine, made me “the best dressed man at Danko Jones”, which, being given that title at a Dank Jones show, is an extreme honour.  My outfit consisted of a faux-black leather collared jacket, black dress shirt, expertly single-knotted white tie, skinny black pants, and an amazing squared-off pair of white dress shoes.  Planning for the show I was attending, I knew I had to be stylistically appropriate!

The audience was immediately prepared for a full-on rock show as your band entered the stage in all black attire with white instruments, your white double-horned Gibson SG gleaming like a musical Excalibur ready to cut through the masses.   John ‘JC’ Calabrese (bass) and Rich Knox (drums) are the anti-universe Andrew W.K., but just as sweaty, hair soaked like professional wrestlers walking down the long arena aisle to get into the squared circle, making WWE’s decision of using “There’s Gonna Be a Fight Tonight” an elegant choice for the official 2015 Royal Rumble theme.

Impressive song selection from your new record and past albums, giving every fan songs to appreciate, and yell along to, from the Danko Jones timeline.  Well selected, sir…well selected!

Here are my “Greatest Hits” comments based on your set list:

“You Are My Woman” is an oddly-romantic, tough as nails love song for those of us that love Aerosmith but hate their ballads.

“She Makes Me Forget My Name” is more solid then the chocolate Easter bunnies kids will develop Type 2 diabetes from the morning after this show. No one, though, forgets Danko Jones.  Nobody!  There is an amazing “Creeping Death” riff in this tune.  More sex songs needed, please and thank you!

Q: “Do You Want to Rock?”  A: Of course, we do!   Forever and ever and deep in our hearts we will want to, forever and ever… (hum that to a Burt Bacharach tune and see how well it fits.)

“Legs” is long riffs about long legs.  But where did all the tall men come from?  Really?  Stand in the back so the hot short girls can see the show.

“There’s Gonna be a Fight Tonight” is the song the Ramones would have written if they hadn’t all died.

“You scare me so much, which is why I want to please you crazy [explicit deleted]” is a direct quote, and not a song title, but should be.

“Cadillac” – Ok, I was too busy yelling along to write anything down, but I had an idea it would be cool to film a new video for “Cadillac” using hip, blues inspired children as the cast.  No?  Think about it.  Remember the Mini-pops?  Now think Min-pops Danko Jones style.  Brilliant!

I always appreciate a front man….uh….front person…who controls the microphone and demands to be heard whenever he, or she, dictates the audience to “listen up”.  With Danko-pure delivery, you had a great array of rock ‘n roll sermons, outright opinions, and highflautin’ posturing.

One example was the “On the Spot Review” where, instead of waiting for the choke-held people like myself – that will be explained later – to type up feedback in a few days, you ask the crowd to review you right then and there.  Of course the review was great!

Afterward I thought, “Was that needed sir?  You don’t really need that kind of instantaneous gratification, do you?”  When I realized you simultaneously created positive energy in the room while leading a team building exercise, it reaffirmed my position that you, sir Danko, are not to be trifled with as you can, with a few short sentences, unify a roomful of people faster than any political party, or cult leader, possibly can.

At one point in the show, JC gestured at me for using my phone and waved a tongue-in-cheek accusatory finger.  The overly tall gentlemen behind me, who I think was about to be punched  in the face by another man defending his girlfriend’s honour, put me in a light chokehold to agree with the disapproval at my seemingly non-attentive manner during the show.

Truth be told, I was typing ideas into “Notes” on my phone so I would have accurate details of the night’s proceedings to peruse, retype and edit later.  Lesson to be learned as I have been considering going more traditional using a small pocket notebook and pen to do my writing, even though I thought it may appear pretentious during concerts.  It may, however, lead to less chokeholds and music reviewers, and rock journalists, being held in slightly higher regard.  Consideration was given to getting a fedora with a small sign in the band with the word “Press” hand-printed on it, but maybe that is going too far.

It is after much consideration, Danko, I agree with your declaration that “[you] are the only honest band in this country” but disagree with your contention, “every song sounds the same with different titles.”  The honesty is very much appreciated, and refreshing, proving you are not afraid to turn a JC critical eye towards yourself, but among the sweat, and power, and drive, and bravado, there is enough originality and creativity to increase your status above AC/DC to be a true, heavy, rock and roll band.

For the record, I was not the lone recipient of JC’s tongue in cheek – eyes in cheek (?) – watchful finger and enjoy reliving the moment in jest as a gesture of comradery!  The comradery was extended to my friend Zelda Belladonna, mentioned in my last “Dear Danko Jones” letter, in the form of an appreciating wink.  Instantly we decided we need to write a song called “Danko Jones’ Bass Player”, title pending, for a soonish to be formed new side project.

Your band deserves as much credit as you do, sir, for contributing, and propagating, the Dank Jones experience.  JC and Rich rock as much as you do adding the essential elemental energy your tunes deserve.  Sweaty, driving, inspired; what rock ‘n roll should be.

“Mountain” expounds the soft-focused lighting, greeting card sentiment idea “everybody is sexy in heaven” which should be used either for First Communion occasion cards or funeral sympathy cards.  Everyone, I would argue, except for the sweaty, smelling, ball-capped guy in front of me.  I am sure in heaven he will be sexy, however, during the show, he was as funky as a Parliament bass line, but not at all in rhythm.

With a bad hat.

The closing canned music accompanying us out over the loud speakers was Screamin’ Jay Hawkins’ “I Put a Spell on You” which sounds like it could be the lead-off track to your next album.  A perfect song choice for a night cap of black shirts and sweaty intentions!

To steal a quote from Blaise Pascal, or Abraham Lincoln, or Mark Twain, or other barrage of literary figures it has been attributed to, “I would have written a shorter letter, but I did not have the time.”

A true “RockNRolla”, according to the Guy Ritchie movie, which I won’t quote here to avoid a copyright lawsuit, wants it all, and you, sir, have it all!

I am also looking into developing your Super Group All-Star team up, as mentioned in my last letter, into the “Dear Danko Jones Concert Series.”  Details will follow as they develop.

I hope you are properly showered and ready for your next show!

P.S. – I wasn’t able to arrange a photographer for your show, so I took a few pictures with my iPhone discovering that the iPhone “whatever number I have” does not have a good camera.  (Yes, I am blaming Steven Paul Jobs and not my lack of photography skills.)  Instead, I took a pic – attempting to sound hip – of your press photo from the free, weekend newspaper that was delivered to my house the night before your show.  The picture is uncredited, so assuming it is from your press kit and public domain.  I apologize you are slightly cropped out, but I wanted to include the crossword and Sudoku puzzles in case you, or anyone reading this, wanted to finish them. I couldn’t get 10D, if you can give me a hand.  Thanks!

Danko Jones is currently sweating profusely around the world on his current Wild Cat tour.  For dates, go to http://www.dankojones.com/tour/.