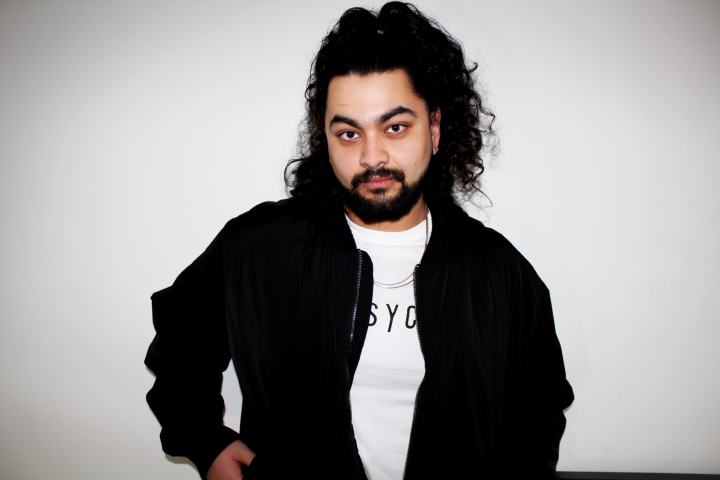 Salman Baksh AKA Psych started rapping at the age of 16. He was born in Dhaka City, Bangladesh,but moved to Mississauga at a young age. He now resides in Toronto where he fully devotes himself to music. His music is heavily influenced by Tupac, Kanye West, The Weeknd and even Carlos Santana, but remains his own as he introduces his own brand of positivity into all of his music, spreading the message of hard work, friendship, and self-reliance. Now it’s time for you to find out more about Psych in our Five Questions With segment.

My name is PSYCH, short for Psychology, and I’m a rapper/producer/publisher from Mississauga aka Sauga City, Canada. I’m not signed to a major, I’m signed to MYSELF :D, under my own INDIE record label called PSYCH MUSIC

Since a very young age I understood the power of SUGGESTION through music. I started listening to music in the late 90s, I was born in 91, and I felt like at that time there was a level of versatility in story telling in rap music. For example, you would have rappers like Tupac Shakur, rest his soul, but even though he lived a hard life and actively promoting “thug life”, portraying guns, drugs, gangs, and violence…he wouldn’t be like bragging about moving packs or shooting gats all the time; he’ll have songs like “holla at me” where he says “can’t let the evil and the money trap me”. Even though they portrayed a hard life, you had to show that you’re a person also with real feelings and normal days. That’s what I love in music then and I LOVE how even now we have a number of Deep Thinkers and STORY TELLERS in rap.

I always say music isn’t my art, its my CRAFT, I create music therefore I craft it. However what makes me an ARTist is the way I live my life, approach people, make mistakes, live up to them or act out, calm back down and get back to work, get mad when everyone I knew told me I wouldn’t get it and then get chilled and come up independently. I guess the way I speak to myself is what makes me an artist, so when I get on the microphone to record, even though i’m addressing the listeners it is still an extension of me talking to myself. I will forever be a deep thinker, a storyteller, but remember I understand the power of suggestion in music. If I get on the mic and say “If they get me going, they’ll be finding out, I don’t need my boys to bring it out, B**** ill bring it out!” When people hear that they might just think its cool, they might not know why I said it. What I meant by it was, when you’re going through hard times, don’t expect someone else to fight for you, fight for yourself, and only fight for what you believe in. How do I emphasize that? By empowering the phrase “I’LL BRING IT OUT”, which paints a picture illuding to being self controlled. I just want people when they like my music, to sing along with it a couple times that’s it lmao, u don’t have to tell me you like it or anything just SING ALONG, and they’ll psychologically be affected to aim to be just that little bit more positive. Influence! I think those who are most influential are also the most influenced.

As for the technical side, I write half the time lol. On my last LP Escape From Shadowland, which was my first album the last 3 before that were mixtapes, I wrote 5 of 19 songs. All the other songs were like spontaneous combustion, just staying in the studio not leaving making the rhythm of the beat, then spit my thoughts on the mic, stop, play it back and record the next few lines and so on. I also produce all my beats, but I also work with a lot of talented producers, shout out DJ Mike Cartel.

I WOULD LOVE TO HAVE A STEADY TOUR DATE!!

Honestly, I’ve been performing at bars and pubs and street events, nothing big time like a scheduled tour, but that is for sure the next step. 2016 I took the time to learn the business admin side of the music business, in terms of publishing and what it means to have your masters. Upon studying that, I opened up a record label called “Psych Music Records” as well as a publishing company called “Psych Music Publishing” and then distributed my first album through myself. Now i’m learning, that this business is arguably 30% talent, 70% business 0 F*****G Luck.

Music is SUBJECTIVE, so if I have to say what song I would recommend to the masses would be my single “SPORADIC” because in that song I took my different styles and moods and combined it into one. Its an easy listen but it’s a HEAVY VIBE.

I listen to a lot of different music but i’m not as much of a music nerd as my friends are lmao. Aside from the big idols of the city as Drake, The Weeknd, Tory Lanez, Party Next Door im fucking with me and my team music, shout out to SH3R and AYYDOS, extremely talented artists and they’re coming with me. Also Shout out Danny Jay man hes one of the most VIBE live producers from the city.