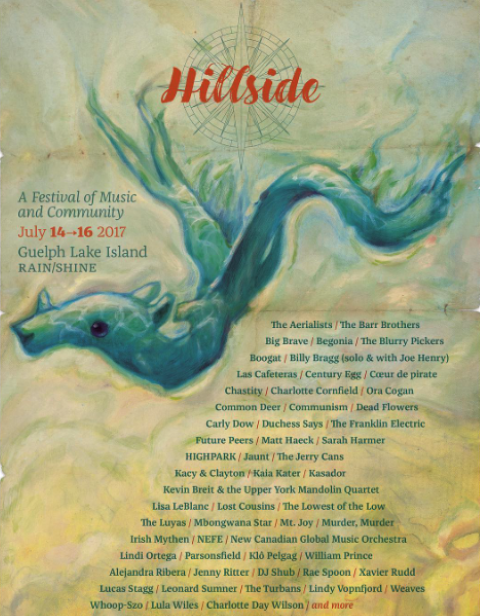 A few weeks earlier than usual, on the weekend of July 14-16, 2017, out on Guelph Lake, Hillside Festival will hold the 34th annual gathering on the island. In keeping with the strong spirit Hillside has cultivated, we have programmed a line up of artists who are gifted and ambitious. Our 2017 line up is packed with enablers and disrupters, enabling new ideas to come into consciousness and culture and disrupting the worn channels of thought and feeling upon which we rely.  In one-way or another, so many of these artists challenge the status quo, whether through their musical or literary experimentation or their activism, be it political, environmental, race- or gender-based.

Hillside will create a more vibrant and caring world by promoting altruism, equality, environmentalism and peacemaking in every aspect of its work. The Hillside Community Festival is a not-for-profit music festival that celebrates creativity through artistic expression, community engagement and environmental leadership.

Tickets are already on sale. This year our weekend passes will increase in price leading up to the festival:

Don’t forget, children 12 and under are admitted to the festival for free!