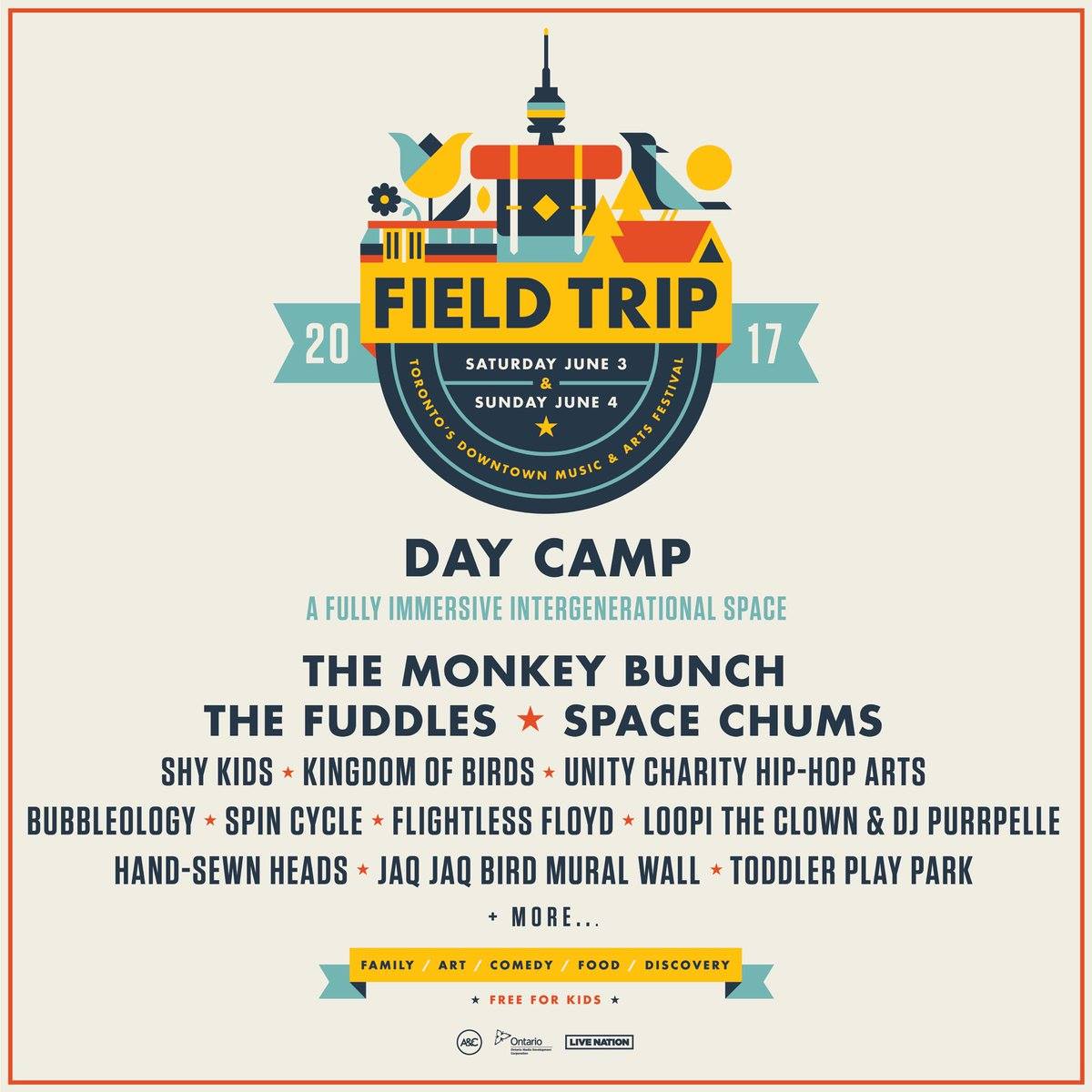 There are few large scale festivals in Canada as family friendly as Toronto’s Field Trip Music & Arts Festival. Aside from the standard “kids (12 and under  get in free with a paying adult) offered by most fests Field Trip goes a huge step further and offers a full schedule of kid friendly activities and performances in the form of their Day Camp.

For year 5 Field Trip’s Day Camp is set to delight with a toddler play park, a mural wall were the whole family can unleash their creativity, a photo booth, clown, and Toronto’s beloved Flightless Floyd. In addition expect a bouncy castle, carnival games and musical performances from The Monkey Bunch, The Fuddles, Space Chums and more.

“Saturday will feature headliners The Fuddles, a trio of silly songwriters who connect instantly with relatable lyrics about the lives of kids and parents alike. The opening day also features the incredible street performers Heath Tarlin, who will bring a juggling/unicycle show called Spin Cycle to the Day Camp, Indie rock band Kingdom of Birds (whose average age is 12), and Bubbleology, an interactive performance all about blowing enormous bubbles, rounds out Day 1 programming.

Sunday’s bill opens with Unity Charity’s Hip Hop Arts program (featuring young beatboxers, dancers and rappers), before the day moves into a sing-along of kids’ favorites (and hit pop covers) hosted by buzzy locals Shy Kids. Flightless Floyd will appear both days, alongside the one-of-a-kind Loopi the Clown and her DJ Purrpelle. The Day Camp stage closes with two of Toronto’s best-loved children’s acts – the costumed brilliance of Space Chums and the clever and hilarious quartet The Monkey Bunch.

Throughout the weekend, toddlers can get their climb on in our Toddler Play Park and kids of all ages can make mascot costumes in our Hand-Sewn Heads photo booth. There will also be a bouncy castle, carnival games and a huge chalk mural wall for vibrant self-expression, courtesy of Jaq Jaq Bird.”

The annual downtown festival takes place June 3 and 4 at the historic Fort York site and will feature headliners Broken Social Scene and Feist. Tickets are available now at http://fieldtriplife.com/tickets.