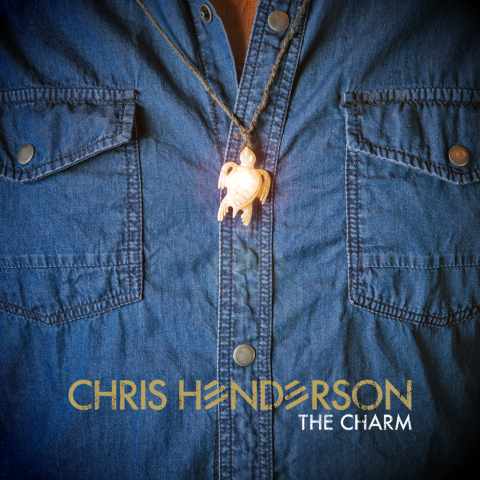 Chris Henderson is an award-winning country music artist from Saskatchewan who recently released his third full-length album The Charm. It has nine solid tracks on it with Henderson teaming up with Brad Prosko to produce it in his home province. Some of the songwriters that collaborated with Henderson on this album include Russ Broom, Mike Little, Steve Mitchell, Daryl Burgess, Adam Wheeler and Chris Yurchuck to name a few. Henderson ventured away from the sound he’s had on past collections by bringing in instruments to this one he hasn’t utilized before, including the actual accordion that was used by John Mellancamp back in the day. This sound gives The Charm a “rootsey” feel to it while giving this artist the honest approach that he was searching for.

The Charm – there’s a double meaning to this title. This is Henderson’s third album and as the saying goes, “third time’s a charm.” Also, when you look at the album cover, you’ll notice it features a turtle charm (there’s also one hanging from the guitar on the back). These are a tribute to Henderson’s grandmother, Myrtle, as she made a tradition of giving him turtle trinkets and charms when he was a child.

The third song is a very meaningful song that tugs at your heartstrings. “’Til it’s Just a Memory” was written in tribute to Henderson’s grandmother and one of the best days he ever spent with her. She was bedridden at the end of her life, and when he brought his new guitar over to show her, she managed to get out of bed and go to her piano to “jam” with him for about an hour. It was one of the most powerful days/hours of his life.

Henderson’s first single from this album, “My Regret” (released in January) is steadily climbing the charts of country music radio. This song, written with Troy Kokol, has a great beat to it and tells a story of “taking a chance on love.” It’s a song that makes you want kick back and sing along.

One song that I liked was “Kissing Sadie.” It’s a catchy tune. It’s about the memory of a past love that continues barging in into the now of a new love. That truly happens in real life.

This album is a compilation of love songs, life stories and all the things that you can relate to and embrace every day. It has upbeat lyrics and great melodies.  The more you listen to it, the more you want to listen to it.

The Charm is great album and it’s one that you should add to your collection.