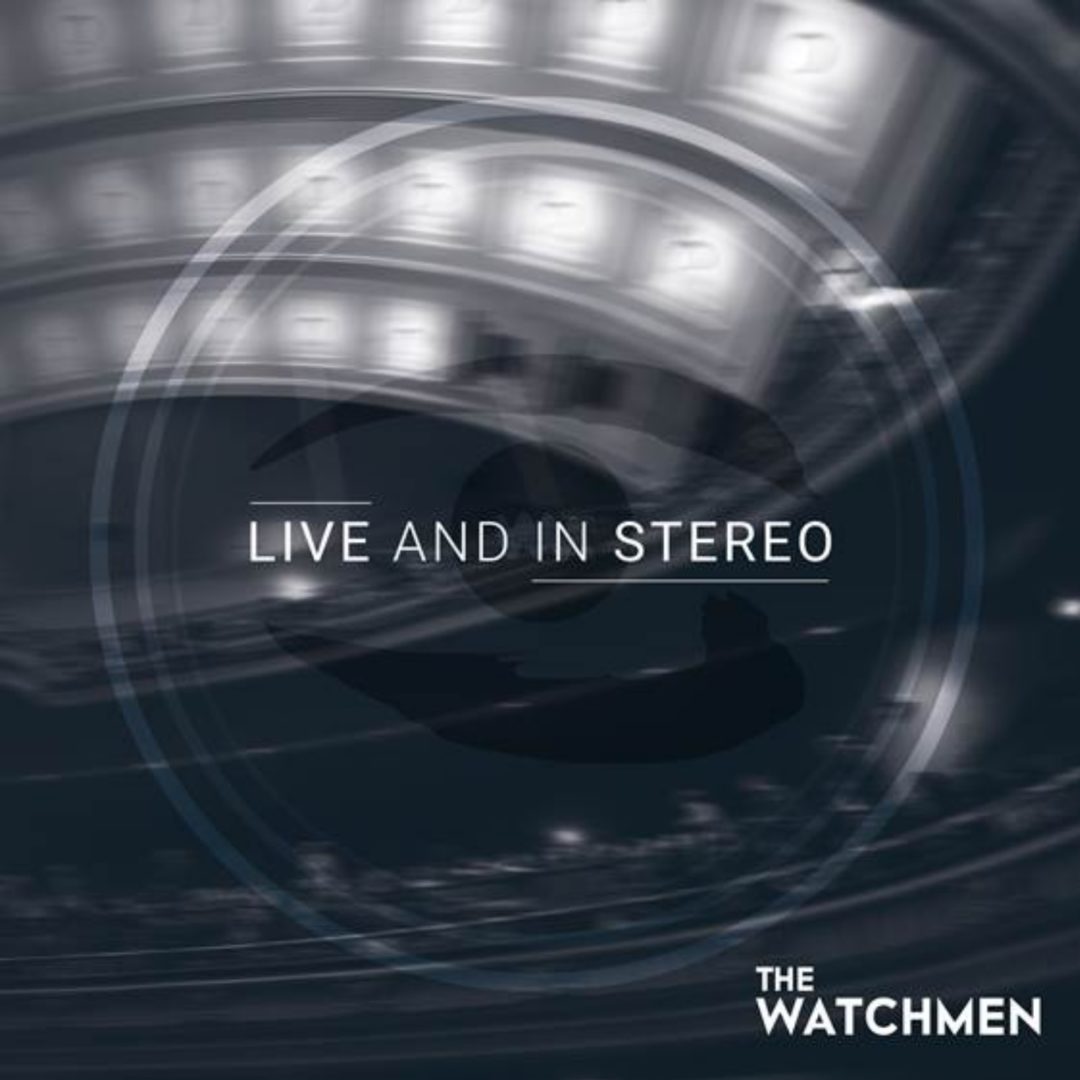 Album:   Live and In Stereo
Date:  April 7th, 2017
Download
Genre:   The Best Band from Winnipeg Who is Not the Guess Who or the Weakerthans.

One Line Review:  Recorded in March of 2017 at the Burton Cummings Theatre in Winnipeg, beloved Western Canadian band The Watchmen offers everything a music fan could possibly want in an excellently produced, energetically performed, first official live record Live and In Stereo.

Full Review:  Looking at the digital download for the new The Watchmen live album, I am respectfully contemplating where to begin.  Without having listen to the record, a Parthenon of Watchmen memories sit waiting patiently for homage, the sweet smell of burnt offerings ignited by nostalgia and the incendiary devices of emotional memory.

Music, for music fans, transcends the obviously attraction of rhythms and appealing lyrics, back beats and infectious grooves, catchy sounds and copied style.  Listening to music, whether it be band, or singer, or song, takes the music fan back to where they were and who they were, a connection transcending time and space and never ending, sweet ambrosia for emotional eternal life.

It was 1993, and a grade twelve student skipped the afternoon of school to sit outside the Broadway Theatre in Saskatoon to be the first in line to get tickets for him, and his current girlfriend, soon to be future wife, for 54-40 with special guests, The Watchmen.

Wearing the “flower sniffn’ / kitty pettin’” corporate rock sucks Nirvana t-shirt, with the unhappy-happy face, I sat outside the Broadway Theatre all afternoon, missing Chemistry while my girlfriend was in hair school, the only person “in line” for a line-up that would not start for another six hours or so.

During that time, I watched band members walk in and out of the theatre, listened to sound check as it weakly squeaked out the theatre doors, and followed 54-40’s Phil Comparelli into Calories, THE alternative coffee shop in Saskatoon at the time, where Phil autographed a Collected Poems of Leonard Cohen for me, which still has a place of special reverence on my book shelf.

The opening band, The Watchmen, was this up-and-coming alternative rock band from Winnipeg with a unique, edgy rock sound with surprisingly lush vocals and underground vibe.

The cool alt. / band geek kids I hung out with were learning songs from McLaren Furnace Room to cover with their bands to play at whatever make-shift all-ages gigs we could find, either at the Bassment, or civic centre, or restaurant, or living room, that would agree to a special license or let us in.

The Watchmen sounded wise beyond their years, the cool first cousin, or child of your parent’s best friend, that you looked up to and respected, the one that showed you the used comic book store with the one-armed owner or gave your first bootlegged copy of Pixies Doolittle.

Their sound was pure straight head alternative rock without an overt punk or self-aware parodying sound; it was honest and raw and polished and solid.  Twelve songs in 52 minutes.  Remember when albums where less than an hour long?

I realize I reference Sons of Freedom on numerous occasions, as they are still THE industrial / alt. sound of the late 80’s and 90’s, but The Watchmen were SOF more polished and pop-arranged, alt. vibe and pop smart.  The first half of McLaren Furnace Room exemplified the 90s alt. industrial sound while the back half is tough pop with catchy, long phrased melodies.

“Ride and Hide” was tough, and catchy, and had a swear word before the first chorus.   “Crazy Days” was a song we attempted to cover.

They were the new band from the prairies that was going to do something, to help put the Prairie Provinces on the map with a contemporary sound now more relevant then the Guess Who.

Saskatoon had the Northern Pikes as their major label champs, though more country and folk rock influenced, and it was time for Winnipeg to have a new up and coming ambassador.

I think about how the band I was in called bent. – with a lower case “b” and a period – in 1994 got to open for the Watchmen in 1998, or somewhere around then, at Louis’ on campus, and 54-40 as well, getting to share the stage with the bands we greatly admired, and still admire, to feel, not like peers, but understudies, being allowed to share their sacred space, the Holiest of Holies, that was their omnipresent domain.

I think about how one of the guitar players from bent., Mike Semchuk, longtime best friend, lost his battle to cancer shortly after.

I think about how the once-current 54-40 obsessed girlfriend, who became my future wife, lost her battle with Cystic Fibrosis three years later in 2001.

I think about the bent. drummer, Derek Bachman, the official biggest Watchmen fan I have ever had the pleasure to know, passed away to a sudden and surprised complication to a sickness in the hospital just two years ago, a man who was putting the Saskatchewan music scene on the map professionally in a way that had been previously unprecedented.

I think of the changes, and the struggles, and the dark matter that effects our lives and keeps our emotional planets aloft, the relentless changes brought on by time and filtered through memory and how, with an opening guitar riff, initial lyric, or triggering drum beat, we can all be taken back to the front row of that theatre, sweaty and red faced and pushed against the stage 23 years before living in that moment unaware of the changes life would bring.

Not that it was better or worse.  Not to rehash the memories of yesteryear as superior to present as now, in this present, 23 years from now is as foreign as it was back then, before second albums were released and loved ones died from various, easily pronounceable, but hard to speak of, diseases.

I think of all this before I listen to the Watchmen’s new live album Live and In Stereo, awaiting and uncertain of the wormhole journey I am about to travel, what swirling vortex of memory I will venture down and end up on the other side, what past dimension, and possible conjured parallel universe awaits me, created by conjecture and the What If? statements reserved for all night ponderings and star-gazing camp fire scenarios.

Music is the recorded facility to relive life.

In all honesty, there is a small part who is afraid it might not be good.  What if the edited mind has fixed the imperfections leaving a dishonest representation of time?  Is that not, though, the purpose of interpretation, to infuse emotion with experience to interpret the moment as it was, a moment for someone at that time, in the hopes, someday, to return, in some form, even slightly?

Before I listen, I know I will enjoy the record, my bias obvious and emotionally connected.   If I had to defend this album in court, I would have to step down on grounds of personal conflict.

Live and In Stereo itself is a great live record featuring a vast catalogue of songs, great production, and enough crowd noise to give a genuine live feel.  At times, such as in “Soul Stealer” there are R.E.M. sounding moments, back in R.E.M.’s Document or Dead Letter Office days.  A signature trademark of The Watchmen live show, Daniel Graves performing a song a cappella, is continued with Graves singing a heart-felt version of Tom Waits’ “The Heart of Saturday Night.”

The original Watchmen line up sounds as contemporary as ever, fresh and classic, reassuring and rejuvenated.

To touch upon the past meeting the present, Live and In Stereo is being released as a limited edition, 8 track vinyl release with an accompanying digital release containing the entire concert.

“It’s time to be free” to listen memories melodically arranged and rhythmically displayed, enjoy my 23 year old memories, appreciate the 23 year worth of memories to come, and share, with all music fans, the memories that they bring to this impactful live experience.

The past is back to say “hello”, if even briefly, to remind us of life’s changes, life’s consistencies and life’s continuities played out over reproducible digital (onetime analog) soundwaves.

The Watchmen’s new album Live And In Stereo is set for release on April 7 via Fifth Kid Records on iTunes and other online sources.  The Watchmen are recreating the Live and In Stereo experience performing at the Burton Cummings Theatre in Winnipeg on April, 8th.   Tickets available through Ticketmaster.  Upcoming tour dates to be announced soon, so be prepared.