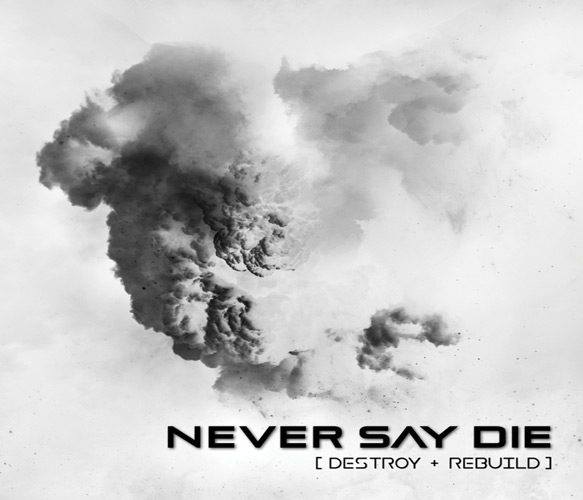 Full Review:   When a Canadian band has a career resume of being signed to Chad Kroeger’s label, having superstar rapper Ludacris, legendary guitarist, heavy metal-blues phenomenon Zakk Wylde , Australian singer/guitarist Orianthi,, and country-pop singer Jessie James all appear on one album, and having a song featured on an immensely popular horror movie soundtrack, Saw 3D, what else could one want?  That one sentence has more musical star power, gross-genre celebrity clout, and pop cultural references than most bands now could possibly imagine.

Where else can one go?

(Side note – There is a Boss guitar pedal advertising poster from the mid-80s of a giant, yellow heavy metal robot laying waste to a city with panicked citizens fleeing apartments and office buildings.  Try to Google it for an accurate robo-destructo visual).

Never Say Die is alluding to a time when industrial music could be heavy, angsty (now a word), and catchy without a loss of integrity, aggression, or attitude.  Combining the industrial roots of “Head Like A Hole”-era NIN, Econoline Crush, with a dash of Linkin Park, and modern peers Art of Dying, Palisades and Skillet, Destroy + Rebuild is an easy inclusion into the modern canon of post-hardcore, industrial-emo, heartbreak music to break fingers to, rock records.

The first track “Since You’ve Gone Away” opens with a driving guitar riff in the style of Refused, complete with affected percussion and industrial / dance / drum sounds building to a mid-tempo, syncopated riffed guitar tune with ambient back synth.  The chorus is a driving push with intensely delivered vocals taking the listener back to the richly recorded, technical guitar riff.  An intense intro tune setting the tone for the rest of the record.

“Like A Nightmare”, the current – at the time of this review – Canadian Beats’ Beatdown Champ, is old-school NIN, with a Rob Zombie / Ministry type industrial bass line and a straight ahead emo influenced chorus.  Vocal phrasing is classic Trent Reznor with a pushing half time feel.  Great bonus track for The Fate of the Furious movie if it was needed, and it most likely is based on the preview.

“Something Left To Save” is the Motley Crew ballad moment of the record with a Smashing Pumpkins opening guitar riff while “Rear View Mirror” is a solid mid-80s industrial tune in the style of Sons of Freedom with cleaner vocals, more open production, and better budget. “Outside Looking In” is the love ballad for metal heads with an interesting mid-80s synth string effect.

Lyrically, the songs on Destroy + Rebuild discuss the loss of relationships, emotional betrayal, moments of self-discovery, and the chaos of life that leads people down reluctant, often needed, paths.  This album is not a heartbreak album where one eats a pint of Bryers Ice Cream and cry watching Bridget Jones’ Diary, this is break up music to smash out headlights and the glass from picture frames.

Production and mastering wise, Destroy + Rebuild is beautifully balanced and seductively clear, easily palatable to the ear while retaining a heavy weight and industrial energy.  Every extra string on the bass and guitar can be clearly heard.  Fine, there might not be extra strings on the guitar or bass, but it sounds like it.  Standard tuning need not apply to this record…

As their debut release, Never Say Die will have to live through the growing pains of being referred to of the ex-My Darkest Days band for the initial round of reviews and articles, like this one.

On the merit of this release, however, Never Say Die is creating their own sonic shadow for other bands to try to crawl out from underneath needing to take vitamin D pills to compensate for their lack of musical sunshine.

As many industrial pop-punk bands of yesteryear wind down a career with an array of ballads or radio, slightly edged rock tunes, Never Say Die is coming full force with Destroy + Rebuild combining tight metal riffs with industrial beats, angst vocals and rock attitude to spare.

Never Say Die’s debut album Destroy + Rebuild is out now on iTunes and everywhere else you try to look for it.  For more info, check Never Say Die on the world wide web at neversaydie.ca, Facebook at facebook.com/NeverSayDieTheBand, Instagram at instagram.com/neversaydieofficial and Twitter at  twitter.com/NeverSayDieCA.