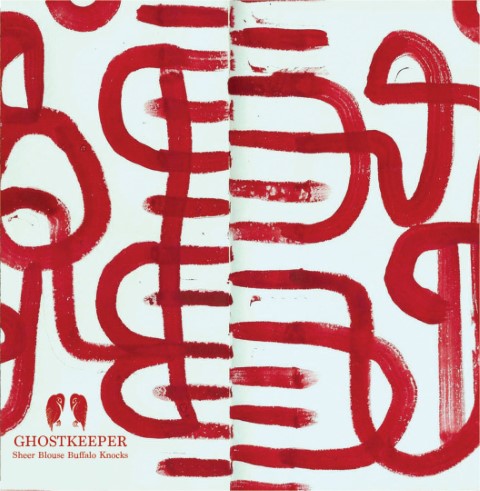 Ghostkeeper’s newest album Sheer Blouse Buffalo Knocks was released on March 24 2017. My first impressions of this is that it is an album with a lot to say, both lyrically and sonically.  There is a lot to comprehend so this album definitely warrants listening to a number of times over to really pick up on all the elements within it.

In many ways this album with its psychedelic vibes has all the oddities of St Pepper’s Lonely Hearts Club Band, but remains rooted in Canada through its blend of aboriginal sound and lyrical protest.

The first track, “Dandelion’, sets the tone of the album and introduces you to a number of repeated themes you will meet throughout, including the unconventional song structures, artistic use of sound and blends of Aboriginal music and indie pop.

I said this album was one with a lot to say and while each song marries its own colourful pop sounds with energetically charged lyrics, perhaps the most poignant of which, for me at least, was repeated in “Muskeekee”; “At least you’ve got your children and they speak your language”. My first thoughts immediately jumped to a darker part of Canada’s history and to the survivors of the residential school system.  These musicians are not afraid to bring up the big questions and will ask you to think, listen and look a little deeper.

One of the more conventional songs on the album is “Chinchaga”, the ultimate track. Houle’s voice is the central focus and is beautifully blended with soft synths and slow, dreamy chords. One could imagine floating down the Chinchaga River with her looking up at the stars listening to it. The beautiful calm after an album of carefully orchestrated chaos.

Despite the seriousness of some of the lyrical context of the songs, Ghostkeeper maintains an upbeat quirky album that gives more of itself with each listen and really takes the audience on a journey to awaken the senses. A live performance of these tunes would be an experience not to be missed.

My name is Megan and I’m an alcoholic. No, wait, that’s not right…I am however from the UK, love to travel, surf, take photos, listen to music, write, run, laugh and, well… live. I played the cello from around eight and joined small orchestras soon after. I’ve never been very good, but I loved the complexity and diversity of classical music. Not surprisingly, my appreciation of music ranges from anything from Dvorak to AC/DC or Ben Howard to Above and Beyond; all has its place in my collection. My creativity has now found new escapes, this time in the forms of photography and writing. Combining my new creative outlets with music at Canadian Beats is a great way for me to explore another element of my adopted country – it’s music.