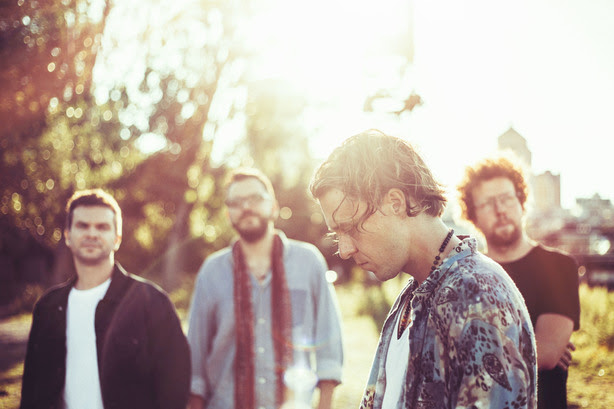 There are few acts I enjoy seeing live more than The Franklin Electric, so I gladly jump on any opportunity to see them whenever they come to town. The Montreal based band recently released their highly anticipated sophomore album Blue Ceilings (via Indica Records) and added a few stops in Canada to promote the record before they once again hit the road internationally.

If possible, always get to a show in time to catch the opening acts because you never know who you’re going to discover. I showed up early enough to watch the entire set from Australian-based folk trio Woodlock who, much to my surprise, were touring Canada for the very first time. No strangers to being on the road with The Franklin Electric the band, comprised of two brothers and one very happy drummer, openly admitted to being nervous which made me like them almost instantly. In between their songs they told stories of visiting Canada for the first time, which included a trip to Niagara Falls, and experiencing their first real winter. It was also such a treat to see their faces light up when they noticed fans singing their lyrics back to them in the crowd. Their sound, while on the quieter side, captivated the audience throughout their 40-minute set yet I found myself enjoying their last song, a more upbeat/electronic track the most.

At 10:15, with their stunning album artwork from Blue Ceilings encompassing the entire backdrop of the stage, The Franklin Electric began to play. Throughout their set, the band effortlessly intertwined new songs like Someone Just Like You, Save Yourself and I Know The Feeling with some of their older hits like Strongest Man Alive and Old Piano.

The Franklin Electric’s love of music is infectious. I’ve witnessed very few bands that play with as much raw passion and pure enjoyment as these guys do – and that feeling transcends through the audience each and every time. Lead singer Jon Matte, whose vocals have the ability to captivate a crowd like no other, wore a smile on his face for the majority of the evening as he jumped from his guitar to his piano to his trumpet and back again.

These Montrealers are, by no means, a loud band and I was pleasantly surprised by how quiet and respectful the Toronto crowd was last night. Phones were stowed away in bags and very few people were talking as most of the attendees allowed themselves to get swept up in the music.

It’s very difficult to properly describe a show by the Franklin Electric. All I can say is that its something you have to witness live because you’ll find yourself leaving the venue even more in love with music than when you first walked in.

Connect with The Franklin Electric