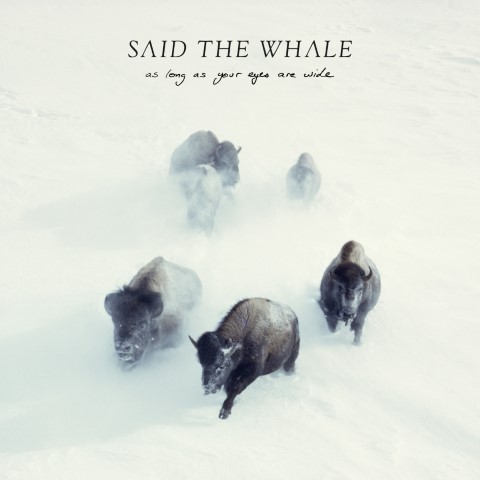 The fifth studio album for Vancouver-based indie rockers, Said The Whale, was released today via Hidden Pony Records.  The band has entered uncharted waters with As Long As Your Eyes Are Wide.  The now smaller band consisting of the trio of Tyler Bancroft, Ben Worcester and Jaycelyn Brown pushed their limits by experimenting with different sounds in the art-pop genre.  They are calling this their “most collaborative, focused album to date”.  The once polarizing styles of the band’s co-founders were brought closer together.  The result is a beautiful harmony of rock and folk music on an album that shines from start to finish!

The album’s opening track, “Step Into The Darkness” illustrates most fully the fusion of contrasting styles.  Although Worcester has deep personal ties to this song as it was written after the break-up with his girlfriend of six years, he limited himself to only a drum loop and bass synth during the song’s creation, so that more creative collaboration could occur in studio.  He explains, “The song is me reaching out to comfort my love, reassuring her that she is safe and despite the immense sadness and feeling of loss, perhaps good things will come. We got back together shortly thereafter.”  “Step Into The Darkness” is definitely a departure from Said The Whale’s previous albums.  But, it is a supreme choice for a single, as it reflects the future vision of the band with respect to killer vocal harmonies amidst pensive and thoughtful lyrics.

My personal favourite moment on the album is when these well-crafted harmonies collide with the infectious rhythms of “Heaven”.  It is one of the album’s most upbeat songs and it had me hooked from the first few bars!

When all of the puzzle pieces fit together seamlessly, the resulting product is bound to get noticed.  Despite the challenges of creating this album, Said The Whale pulled it off with class.  As Long As Your Eyes Are Wide is now available for purchase in store and on all major digital music platforms.

As if that is not enough, their nationwide tour starts today in a SOLD-OUT show at Lee’s Palace in Toronto with support from Fast Romantics.  Stay tuned for our coverage of the show.  We are honoured to be invited to celebrate the release of their album with them!