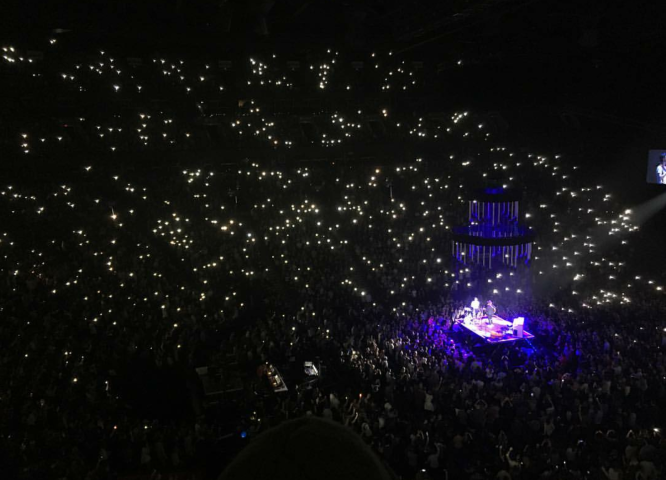 The Lumineers may be from Denver, Colorado but their musical appeal goes worldwide. The bands 2012 single “Ho Hey” has been certified platinum around the world, including an impressive 7x platinum in Canada alone. Their two albums; The Lumineers (2012) and Cleopatra (2016) have brought the band’s music to life and into the hands of fans. From humble beginnings and small venues to massive arena tours, The Lumineers have come a long way.

In support of their latest album the band has embarked on a full blown tour, the Cleopatra World Tour. With Canadian stops in London, Ottawa, Quebec City, Winnipeg, Edmonton, and even Saskatoon, Canadian Beats was lucky enough to catch the band at the Bell Centre in Montreal.

Opening the evening with the Fleetwood Mac classic “The Chain,” the band played live behind the original recording as the curtain flew up and an evening full of great music commenced. Impressed by how many people were there to see the band play the Bell Centre, Wesley Shultz (Lead Vocals/Guitarist) immediately commented on the “tremendous amount of people” who were there to hear their music.

Interacting with the audience, encouraging them to sing along it was when the band kicked off with their signature hit “Ho Hey” that had the audience exploding with cheer and belting out every single song. Taking the audience through a journey of their past two albums, and a few fun covers the band was sharp, consistent, and sounded polished. When you play big arena shows, ones of the biggest issues is connecting with fans. The band had no issues communicating and brought their show down to a second stage in the center of the arena.

I love a band that takes the time to make their live shows interesting and reconfigure their songs to be true to their original arrangements, but have a fresh breath for the stage. The band seamlessly worked together to bring the audience a great show, and in turn the audience responded warmly. Paying close attention to the band and hanging off of every single note throughout the evening.

Though their Canadian dates have come and gone, I can take an educated guess to think that The Lumineers will be creating more music and embarking on tour for years to come. The band is backed by their label and together they have a creative vision for their music. The music that fans have come to love and long for. If you get a chance to catch The Lumineers on their remaining tour dates, take the chance. Big fan, or little fan the band has something you will enjoy. Check out the remaining tour dates and tickets here.