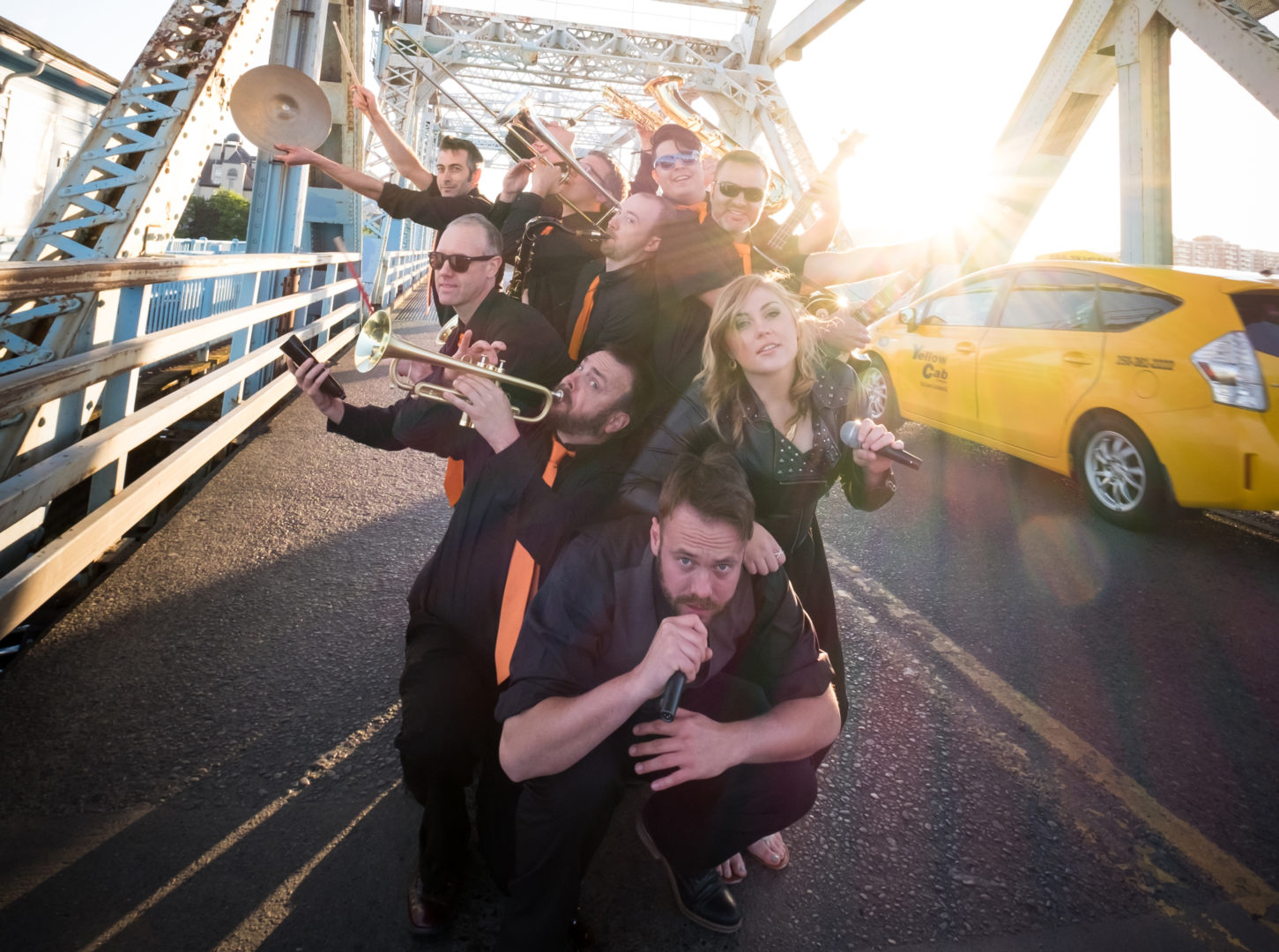 Victoria based R&B/Soul group The New Groovement are still making waves since the release of their album The Orange Album in 2015. Having been nominated for the Urban Artist of the Year award at the Western Canadian Music Awards, winning of Album of the Year at the Vancouver Island Music Awards, and being awarded the title of “band-of-the-month” by radio station The Zone, the eleven-piece band is lead by musical powerhouses Steph Wisla and Danimal House.

Known for their energetic live performances, collaboration with prominent producer Joby Baker on their album, and spot on the Top 30 charts across several provinces, we caught up with them to discuss what went into The Orange Album, what fans can expect from live shows, the background behind their music videos, and what we can look forward to next.

The release of The Orange Album was made possible by a crowdfunding campaign in which you raised almost 170% of your goal. What was that experience like for you? What went into that campaign?

The experience was eye opening and it really put us in touch with our fans. We put a ton of planning into it and had a lot of fun putting it together! One of our Kickstarter reward perks was to have our horn section come to you and play a tune. So to promote that perk, we made a video of the type of situation you might want to actually use the perk for – a proposal. Little did we know that our staged wedding proposal, complete with an instrumental version of All of Me by John Legend, would make others in the restaurant tear up. That kind of made us uncomfortable and we got out of there as fast as we could!

That video ended up getting us on CBC radio and helped us reach our fundraising goal.

If there were any challenges with it, what were they and how were they overcome?

One thing that’s tough with kickstarter campaigns is figuring out great perks that people will like but that don’t cost too much for us to make. So we decided to offer custom songs, raps and videos – little did we know that those would be super-popular and that we’d be working on them for months. But it was all worth it!

While recording, who or what proved to be an unexpected influence?

Joby Baker ended up being a huge influence, in ways we didn’t expect. Beyond simply recording the tunes, he added a vision and spark that made the songs come to life. He truly produced the songs. I guess that’s what you get from a Grammy-winning producer.

Your hits from your album are still wildly popular at live shows. Out of the ten tracks, which would you say always gets the most reaction out of an audience?

One of the first songs we wrote and recorded for The Orange Album is probably still the one that gets the best reaction – Sleep Talking. You have to see it to understand, but it’s a feel-good song that features every band member and has a huge finale. We love playing it, and people seem to love hearing it.

You currently have four music videos up—“Lay Low”, “Call Me By My Name!”, “Dance Heavy”, and “Bad News”—and all of them are very different. Which one ended up being your favourite, and why?

That’s actually a tough question. Every video has its own character and reflects a different aspect of what we do. Dance Heavy showcases the music and gives a little taste of what the band’s like to hang out with. Call Me by My Name is a silly throwback to sitcoms that showcases our fun side, and Bad News demonstrates the thoughtful lyrics and soulful songwriting that makes you think. We can’t really name one video that stands out the most but we’re always excited to evolve and create new and interesting videos.

Speaking of music videos, the one for “Bad News” differs from the others because of both its political overtones and its use of a speed-sketch instead of being live action. What inspired that, and which artist did you collaborate with for it?

There were a number of factors that went into that decision. We really wanted a powerful video that focused attention on the lyrics and brought the appropriate gravity to the feel of the song. The U.S. election was coming up and we wanted to make our own comment on the situation with the song so we put together the video pretty quickly and put it out there to hopefully get people thinking. Looking back, releasing a song called “Bad News” on election night was unfortunately prescient.

The artist was great, but we never actually met him or her in person! We looked at a number of whiteboard animation videos online and then contacted a company that we liked. They did an excellent job listening to our many suggestions and making the video we thought would represent the song best. The company is on fiverr.com and it’s called BNN_marketing – yes, it sounds like a random name, but they do great work!

What is something fans would be surprised to learn about you?

You might be surprised to know that three band members don’t live in Victoria and three have babies. Organizing practices is… interesting.

And lastly, because we’re itching to know—what can we expect from you in 2017?

Most excitingly, we’re finally getting back into the studio to start recording our new album with Joby Baker in August. We’ve got tons of new material that we’re thrilled to finally be laying down – this time with our incredibly talented new singer, Steph Wisla. We should also have a few Orange Album remixes available in the next couple of weeks by some great DJs. And, of course, we’ve got some great shows coming up including opening for the legendary Booker T Jones at the Victoria Ska and Reggae Festival, and playing the mainstage at Tall Tree Music Festival, among others.