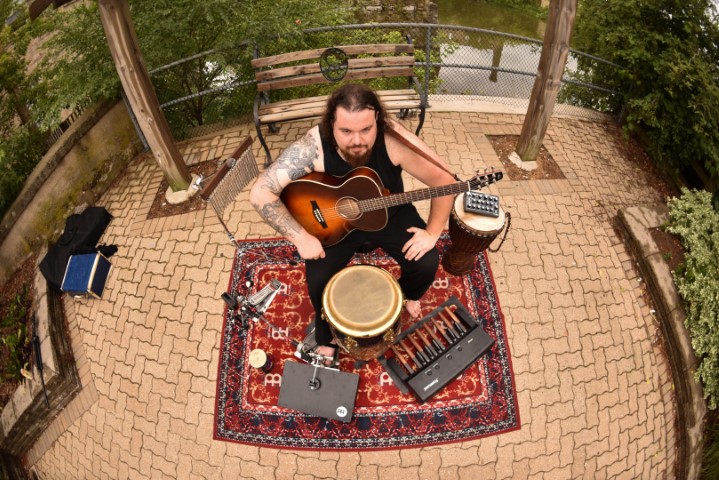 Kitchener-Waterloo based, Sammy Duke launched his debut EP Glass Demons on March 22 at Cork Hall in Kitchener. We were pleased to have a chat with Sammy for this segment of Five Questions With! Enjoy!

Most humble of greetings and salutations. I, Sammy Duke, am a multi-instrumentalist based out of Waterloo, Ontario. I grew up in a musical family where just about every single person in it is a musician. I tour regularly with Juno-nominated songwriter and producer Alysha Brilla as her acoustic show sideman.  Many of the shows we do include school programs, where we discuss social equity with youth in addition to performing her tunes. I am heavily invested in musical education, and regularly do music classes for both children and adults with special needs.

I’m a “one man band” artist, playing upwards of eight instruments at the same time, all while singing. I do a similar setup when performing with Brilla as well – playing bass and percussion simultaneously.

Outside of music, I am a tattoo enthusiast, overpriced tea latte aficionado, and am extremely fond of duct tape (as any true Canadian should be), using it for everything from holding together my cell phone to my apartment ceiling to record Facebook videos, and holding pieces of my car together when my car has succumb to the fate of being owned by an occasionally apathetic musician.

I write folk-fusion music. My musical inspirations range from anything from Celtic harp music, to Gospel, to Afro-Cuban, to European symphonic heavy metal. I am fascinated by the idea of music being a universal language, in that two people, from entirely different backgrounds, upbringings, and even spoken language, can pull out their musical instruments, and create amazing music. Many of my favourite musicians are artists that explore this idea, and I am greatly inspired this way.

I started exploring a one man band concept a few years ago that helped me bring some of these ideas to fruition, and that has since become the centre of my performance as well. Lyrically, I write about a rather wide range of topics; definitely from a more serious place in my cranium. Political injustices, social issues, personal struggles, spiritual battles – whatever is on my mind at the time really.

So to summarize, I sit in a cockpit of instruments that is my one man band rig, and use every limb to play guitar, bass pedal synthesizer (Moog Taurus pedals for the musicians reading this), and a multitude of percussion instruments, including chimes with my elbow, all while singing. There is no looping, drum machines, pre-recorded tracks, or any other  that.  Everything is performed completely live. For select concerts, I perform with additional musicians as well – typically on keys, strings, or some sort of percussion.

I make an attempt to rock out as hard as someone possibly can whilst having literally no limbs available, usually resulting in a fairly sore neck in the morning. No pain no gain, as they say. I am also a bit of an “anti-heckler”, and have been known to casually, but joyfully heckle audience members. You could say I am a casual, though joyful, jerk.

I have a number of great shows coming up. I will be on tour with Alysha Brilla to the East Coast in May. I am also very excited to perform at the third annual Skylight Festival in Paris, Ontario in July.

I am also releasing my debut EP Glass Demons on March 21, and performing a series of shows in southern Ontario that same week, in Woodstock, Kitchener, Toronto, Guelph, and Cambridge. Full list is on my website.

Sympathy both the studio version from the Glass Demons EP, and my live-off-the-floor version on YouTube performed on the one man band setup.  It’s a fairly upbeat bluesy song, and modulates keys several times in the chorus – an extension of my being a bit of a music theory nerd. The studio version includes the instrumentation I envisioned whilst writing (such as Wurlitzer, tabla, and a string section) in addition to my keyboardist, Becky Reesor’s, beautiful back up vocals, and the one man band version showcases how I approach the arrangement in a live setting.

The one man band version can be found here:

I have been listening to Half Moon Run’s newest album on repeat lately. It’s incredibly awesome. I also met a band called Saltarello from northern Quebec at Folk Alliance last February that completely blew my mind. I’m also loving both Elsa Jayne and Janice Lee’s latest material – two awesome artists from the Waterloo area. Otherwise, Loreena McKennitt, Bruce Cockburn, and Harry Manx are three of my all time favourite musicians, and no matter how many times I rotate their albums, I will never grow tired of listening to any of their material. Simply put, there is absolutely no shortage of amazing talent across Canada.