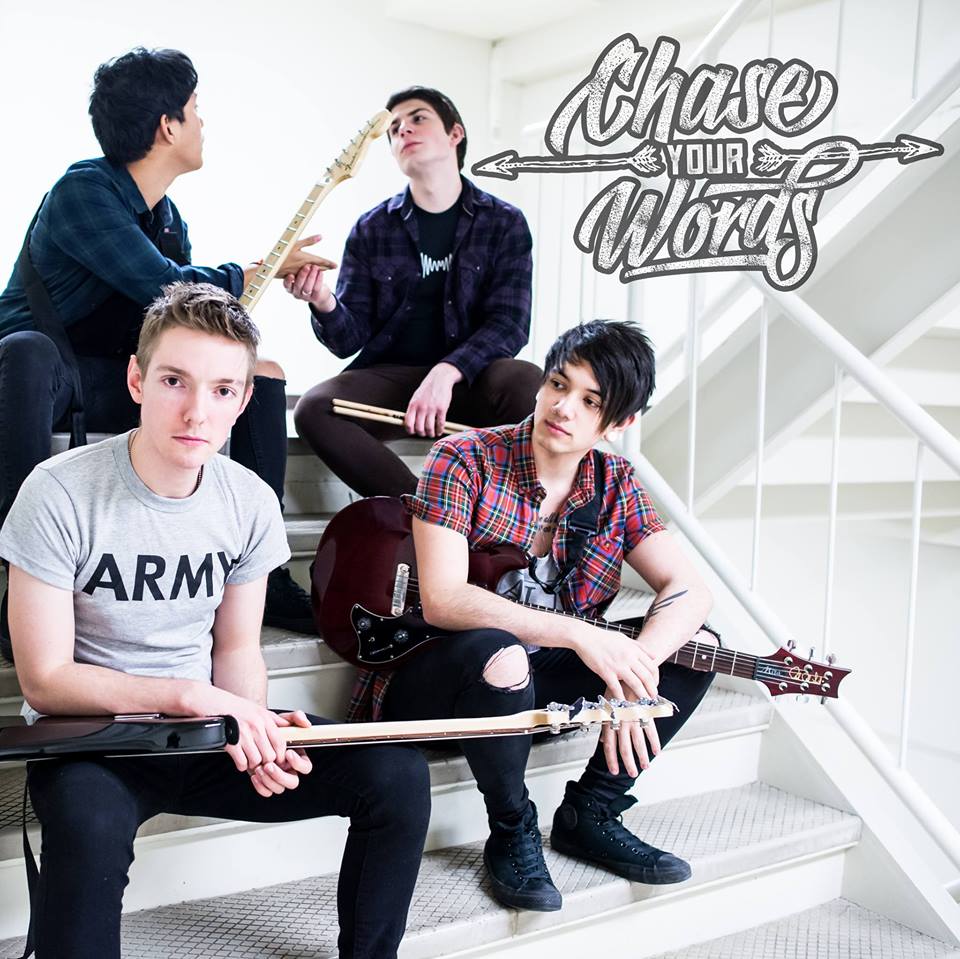 Hailing from the west coast of British Columbia, Chase Your Words are a young pop punk band starting to get noticed in the mainstream. They’re brand new EP Here to Stay was released on February 24th. Check out what the guys had to say in our recent interview.

So, how did the name Chase your words come about?

James: I came up with it when me and Chris were listening to a song by We Are The In Crowd called Lights Out

How long have you guys been playing music together?

Roughly 3 and a half years going on 4

Growing up was there any artists that stood out as a musical inspiration to you?

Chris: I was deeply drawn in to Boys like Girls. As a band, they make incredible music. Their frontman Martin Johnson has always been my biggest writing influence.

James: The Beatles were my first musical inspiration so it has a huge impact on how I see music, being able to venture into different genres and sounds and just being generally open to everything

Curtis: Simple plan has always been a big inspiration for me because they are a Canadian band.

Alex: Green Day. American Idiot was one of the first albums I couldn’t stop listening to. I had that CD in my Walkman for months. Plus, Wake Me up When September Ends was the first song Chris and I played together.

You guys recently worked with Kellin Quinn from the band “Sleeping with Sirens”. How did that relationship get started?

Chris: I guess one day I went to work but got sent home sick. I was lying on the couch coughing up a storm with some chicken soup and I get notifications from our fans on twitter recommending that Kellin check out our music for his podcast We Like It Loud, so I decided to join in on the buzz with the band account. He saw our tweets, heard our music, and I guess that was enough for him to want a number from one of us for contact. I gave my number and immediately we got to texting and talking!

Do you guys have any plans for the New Year regarding music and touring?

Alex: We’re in the pre-planning stages of a tour. That’s all I can say.

Can you name three non-musical facts about you and your band that your fans may be surprised to learn?

Chris: I crack my toes all the time, I’m obsessed with the idea of owning a home zoo, and I’m probably the most tech savvy in the band (Not exaggerating or tooting my own horn, this is just truth).

James: My right foots slightly bigger than my left, my middle name is Paul, and I love orange juice!

Curtis: I learned to play guitar before bass, I have dual citizenship, and I used to practice Taekwondo.

Alex: I hate mushrooms more than anything on the planet. Chris and I have been playing music together off and on since we were 11 or 12. I’m a dual Canadian-Italian citizen, but I can’t speak Italian XD.

What is your favorite junk food?

Chris: I’m a huge fan of bubble tea and sushi. Obviously sushi isn’t really unhealthy, but copious amounts can be.

Alex: I have a chocolate problem.

Are there any trends from 2016 you’re going to miss or wish never happened?

Chris: I wasn’t really a fan of 2016, so I’m going to have to say I wish 95% of it never happened. In regards to musical trends, mumble rap’s gotta go. I feel that it’s time to popularize good wholesome music from hard working artists. I’ve also heard press stories talking about pop-rock bands trying save rock/guitar-driven music, and like what Kellin said in a Kerrang interview not too long ago, “that’s not f****** true.”

Alex: Dabbing was stupid. I’m pretty sure the top knot is out of style now, and I’ll miss that, but I’m gonna keep wearing one. It’s a polarizing haircut and I really like to judge people by their reaction to it.

Who are some of the most played Canadian artists on your playlist?

Since working with Kellin Quinn , is there anybody else you wish or hope to collaborate with in the future?

James: Martin Johnson from Boys Like Girls, anybody from One Direction.

Chris: John Feldmann from Goldfinger, Alex Gaskarth from All Time Low, Michael Martenson from Boys Of Fall, Ryan Key from Yellowcard, and basically what James said.

Curtis: I Would like to work with with any of the guys in Good Charlotte and Sleeping With Sirens (even if we already worked with Kellin, it’d be rad to do all over again.)

Alex: It’d be amazing to work with John Feldmann. Blink’s comeback album was crazy good and I don’t think It would have been without him. I’ve also really been digging Halsey lately and I think It’d be rad to write a song with her, and it doesn’t hurt that everything she touches turns to Gold. *Cough* Chainsmokers.

So what is the next big move for Chase Your Words?

Guess you’ll have to wait and see! 😉

Chris: We’re so grateful to everyone who’s supported us up till now and plans on staying. It’s because of you that we’re this local Vancouver band pushing to break out and be where you are. Your love and support is what drives us. So with all that said thank you.

Curtis: Thanks for all the support and get hyped.

Alex: I love the crap out of all of you. We can only do what we do because of your support. I’m looking forward to meeting you guys on the road!