By Remington Fioraso on March 14, 2017@https://twitter.com/RemingtonFD 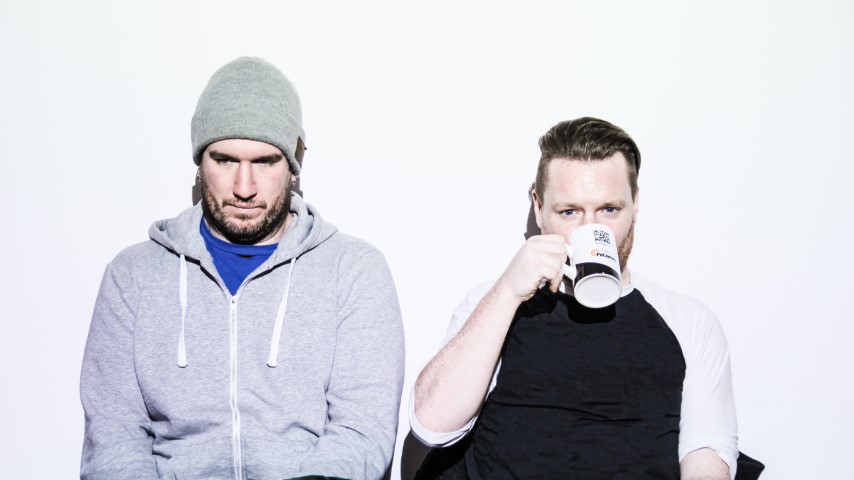 I had the opportunity to ask Honey Beard questions regarding their new album Dreamless Sleep. The album will be released on March 17, 2017.  Be sure to read below to find out more about the release!

First off, can you introduce yourself to Canadian Beats´ readers?

Gary: Hi! Honey Beard is a Dark Synth-Pop duo band based in Toronto. The band is comprised of myself Gary J. Conlon (Vocals, Keytar) and Tom Bell (Keys, Guitar).

Tom: One album that had a huge influence on the direction we went with Honey Beard was the soundtrack for the movie Drive. It was shortly after seeing that movie that we wanted to explore what we could do with synths and a more electronic approach to song writing.

Gary: My influences are a mixed bag, from Metallica and Tool, Nirvana and Smashing Pumpkins to The Doors, Pink Floyd and Depeche Mode as well as Jean Michelle Jarre and ABBA.

Tom: One album that had a huge influence on the direction we went with Honey Beard was the soundtrack for the movie Drive. It was shortly after seeing that movie that we wanted to explore what we could do with synths and a more electronic approach to song writing.

Your new album Dreamless Sleep will be available on March 17.  What were the most memorable aspects of writing and recording the album?

Gary: We didn’t really write this in the traditional way, each song was probably 70% recorded on Logic when it was first conceived and then converted so we could play it with live instruments at shows. So when it came to recording we took a few months to go through each song, clean it up and add layers and scope. Then we prepped it for mixing and sat in on the mixing process that occurred over a few months. Really guerrilla type recording, very cheap and mobile which is the benefit of the home recording landscape right now. Maybe down the road when we have some financial backing behind us we can get the true recording experience, holed up in a recording studio for months and really living the record from start to finish.

What were your main inspirations for the tracks?

Gary: Thematically and lyrically the album is actually quite sad with spikes of anger and frustration, which seems very covert considering the music itself can be really upbeat. In a nut shell the album wrestles with feelings of despair and pointlessness and the litany of visceral human emotions that react to that reality, that react to failure of self-purpose.

Technically, https://www.acheterviagrafr24.com/viagra-pfizer/ I always found two forms of inspiration when writing songs. There is the typical musical influence from your own tastes, and then the current sounds that are prevailing at the time.  With respect to that, I think bands like Depeche Mode, MGMT, M83 and Electric Youth helped us imagine what electronic sounds could achieve in a melodic sense.

Tom: The other inspiration would be what we call the ‘DAW Rabbit Hole’ which is basically sitting till 4 in the morning letting your curiosity (or obsession) mess around with the hundreds of sounds, loops and Plugins that sit within the DAW (Digital Audio Workstation), then just aimlessly firing off any riffs or melodies that comes into your head until you strike gold!

What track(s) stood out the most for you? Why?

Gary: We really tried to pick a bunch songs that were somewhat unique in their own way but fit together as an album. For example each vocal has a slightly different effect and the BPMs of each song are rarely the same. In spite of that if I were to pick a personal favourite that stands out for me it would be ‘Let Me Disappear’, the 3rd track on the album, mainly because it’s so vulnerable in its expression but has a subtle power about it that comes to heel toward the end.

Tom: The song ‘This Might Be Something’ (8th track) is one that stands out for me. The intro of that song is this droning and thumping noise that morphs into a super melodic arpeggiator. It then morphs again for the outro into almost a completely new song.

How would you compare the new release with your debut EP?

Gary: I think the word to best describe the difference is ‘Experience’.  When we released that EP https://www.acheterviagrafr24.com/acheter-viagra-sans-ordonnance/ we were barely 6 months as a band.  Everything was new to us; midi keyboards, synths, DAWs, Plugins, vocal effects and even electronic music itself. When we first jammed together we were a folk band, armed with only a 6 string and 12 string acoustic guitar.  So if you compare the records in a technical sense you can hear that the new album has a lot more layers and a lot more understanding of the dynamics between electronic music and pop music.  Part of me yearns to revisit that EP and mix it differently but it’s an honest and raw representation of where we came from and how we understood ourselves at the time. The new album is very much more accomplished and conceptually more consistent.  Although in saying that, we’re never truly satisfied and I’m sure we will spend countless late nights trying to improve on this for the next record.

Tom: Yeah I think we’ve just learned so much more about where we want to go as a band. Our EP was us exploring and learning about a genre that we hadn’t created in before. We now have a much broader base of knowledge from the production standpoint that we are able to more accurately get the sounds out of our heads and into the recordings.

What can fans expect to see from you following the release?

Tom: We have an album launch party a week after the digital launch. It’ll be at the Junction City Music Hall on March 25th. We are also playing in Canadian Music Week for the first time this year and we are really excited for that.

Gary: Well we’re hoping to play a lot of shows, I think that’s everyone’s wish in a band, especially on the back of an album release. We should have a few more music videos too. But to be honest were already getting excited about the new material we have in the pipeline, in fact we could pump out another album at the end of the Summer if we wanted to. So I can definitely say, for folks interested in our music, that we are a very active band with a very clear vision of what we want to achieve so there is always something on the horizon.

At Canadian Beats, we like to include several fun questions to allow fans to get to learn a bit more about you.

Gary: I was born and bred in Ireland (became a Permanent Resident in 2013) so I never got to really appreciate the great Canadian artists like Tragically Hip et al. My first exposure to Canadian music was Bryan Adams and Alanis Morissette but eventually I got to discover Arcade fire and Broken Social Scene, the latter of which I still listen to today.

Tom:  I really enjoy Gold & Youth. Their song ‘Time to Kill’ is always on my playlists.

Tom: My dad took me and my brother to see James Taylor in Montreal when I was around 10 years old. I got a bootleg tee shirt that had his name misspelled.

Gary: I actually bought two albums at the same time over the weekend. I bought Toronto Synth-Pop band ‘For Esme’, their 2nd album ‘Sugar’ on Vinyl which came out in 2015 and still captivates me today. And the other album I bought (6 song EP) was from another Toronto band called ‘In Drift’. The EP is called ‘Better Days’ and I can’t stop listing to it, imagine the perfect storm between Warpaint, Beach House, Stone Roses and Beach Boys and then you have In Drift, they’re amazing!

Tom: I bought the Montreal band Le Trouble’s new album ‘Making Matters Worse’. I always try to catch those guys when they come through Toronto.

Gary: So many places…North Korea cause that would be such a social experience but really I’d love to go back to LA and play a gig at the Whiskey A Go Go. It’s a bucket list item that I hope to strike off soon!

Tom: I’d love to go to Antarctica. It’s the only continent I have yet to travel to and I think it would be extremely interesting to see.

Gary: “Never be afraid to question everything, to be curious and to take risks.”  Apply this to your musical tastes too and take the time to listen to your music exclusively, no distractions. Buy the physical copy when you can, read the lyrics and appreciate the artwork. Got a free weekend? Then check out a bunch of local bands at the local venue and buy an album if they are selling. It’s all pretty cheap, the risk is low and the rewards are timeless. You don’t have to be militant about it but it’s definitely worth the little time you can put aside.