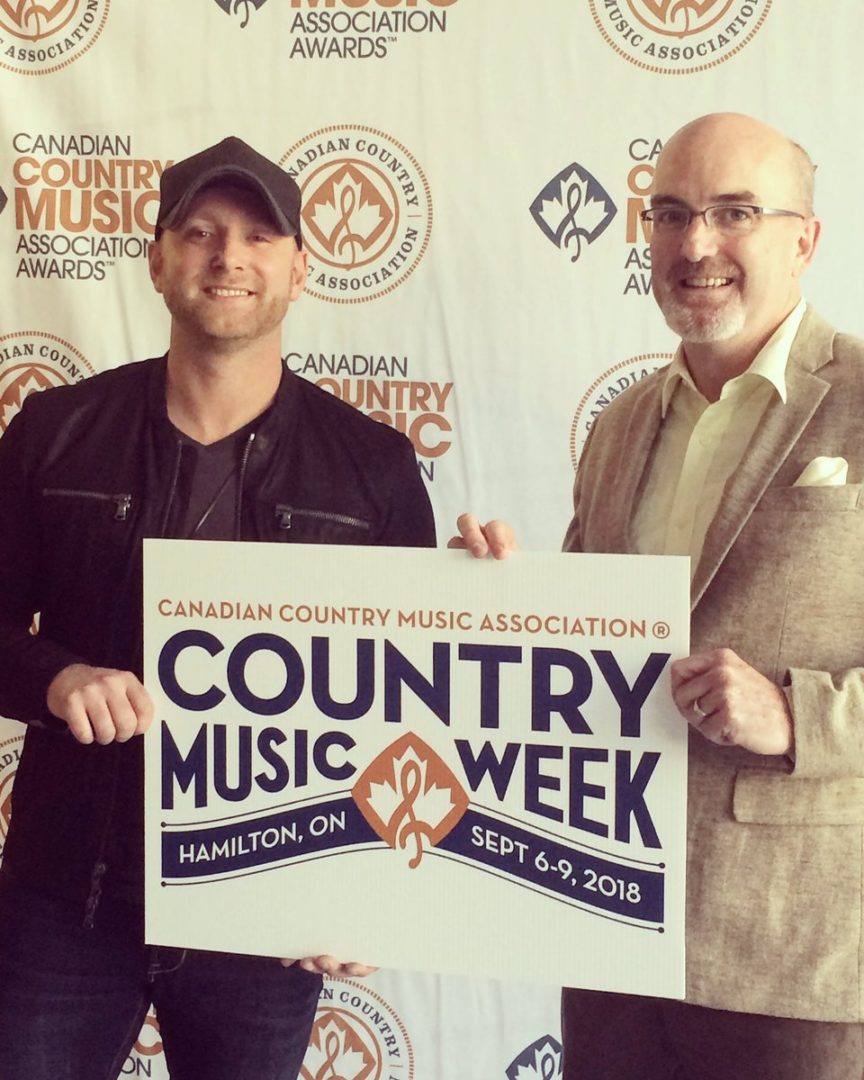 Don Green, CCMA President, formally announced the success of Hamilton’s bid to host Country Music Week and the 2018 CCMA Awards Show this morning, in downtown Hamilton. “We are thrilled to be heading back to Hamilton, for the first time since 2011. The passion with which this city last hosted us, and shared through their bid presentation, makes us confident that country music fans and industry members are sure to be impressed with the event we bring together for 2018.”

“Hosting national cultural events and celebrations like Country Music Week and the CCMA Awards in Hamilton and Ontario, contribute significantly to our strong, diversified economy. Hamilton is a city that boasts a rich tradition of live music experiences and events and will be certain to deliver a memorable week of performances, learning opportunities and recognition of Canada’s top country artists,” said Eleanor McMahon, Minister of Tourism, Culture and Sport.

“The Hamilton music scene is enriched with an outstanding line-up of homegrown talent, along with welcoming the best in the industry,” said Mayor Fred Eisenberger. “Our city has played host to the Canadian Country Music Association on five occasions and we welcome them back again in 2018, continuing a tradition of celebrating music across our country, while growing our capacity to host visitors and showcase Hamilton’s arts, music and culture.”

“We are extremely excited to bring Country Music Week and the CCMA Awards back to Hamilton in 2018. Tourism Hamilton will be working with the local Hamilton Host Committee, led by Tim Potocic of Sonic Unyon Records and Steve Kassay of Durham Radio, as well as our local hospitality partners, the Hamilton Music Industry Working Committee and a host of dedicated staff to ensure the return of CCMA exceeds all of your expectations,” shared Anna Bradford, Director of Tourism and Culture, City of Hamilton.

“The City of Hamilton has had the distinct pleasure of hosting the Canadian Country Music Association five times in a city that loves its country music and the festivities surrounding Country Music Week. In 2018 we will raise the bar on hosting such an event,” shared Tim Potocic, Chair of the 2018 Hamilton Host Committee.

“Since last hosting Country Music Week in 2011, the City of Hamilton is now home to a dedicated country radio station, one which has risen to the #1 position not only in this market but in Canada; clearly illustrating the appetite and consumption of the music/format to area fans,” said Steve Kassay, Vice Chair of the 2018 Hamilton Host Committee.

The ongoing support of FACTOR, Canada’s Private Radio Broadcasters and The Government of Canada through the Department of Canadian Heritage’s “Canada Music Fund” is pivotal in the continued success of Country Music Week and the CCMA Awards.

Those in attendance at the Country Music Week 2018 media conference were treated to two acoustically-performed songs by Niagara’s Tim Hicks, a multi-CCMA Award nominee and a CCMA Award winner.

Before heading to Hamilton, this year’s PotashCorp Country Music Week and CCMA Awards Show will be held in Saskatoon, Saskatchewan from September 7 – 10, 2017.