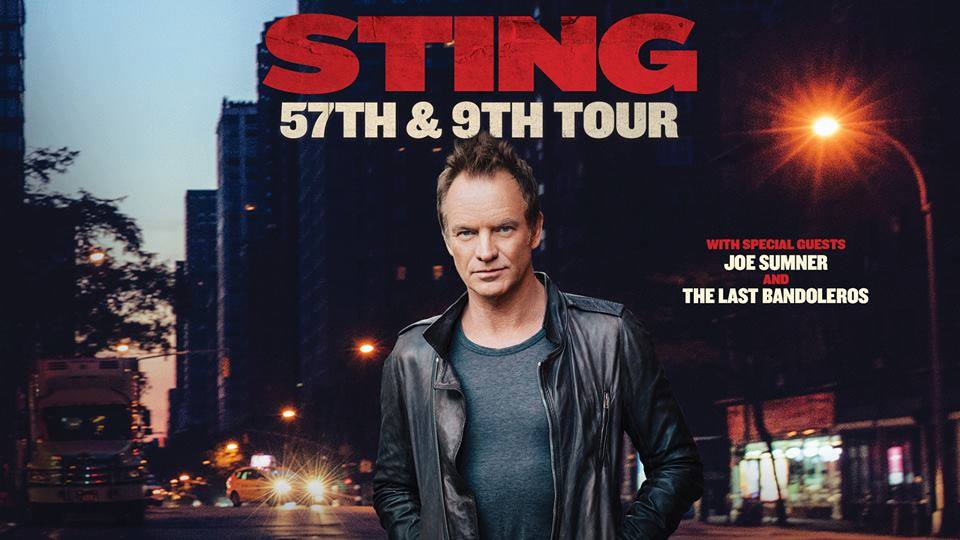 Rock ‘n’ Roll legend Sting brought his 57th And 9th tour to Toronto’s Rebel, along with show openers Joe Sumner and The Last Bandoleros. His choice of venue made his Toronto stop even more exciting of an affair as Sting has been known to sell out renowned arenas of the likes of New York City’s Madison Square Garden, so to see him in a club setting was all the more special.

Joe Sumner, the son of Gordon Sumner- otherwise known as Sting- took the stage first at what was already a near full venue.  Just before he began, a cardigan wearing man who looked mildly like Sting from the shadows of the stage walked into the spotlight with just an acoustic guitar in hand.  This wasn’t merely a man who looked like Sting- he was Sting.  As a treat to those who showed up early, he reminisced about his first time in Toronto with The Police at The Horseshoe Tavern, to which he silenced all cheers with “don’t clap, you weren’t there. None of you were. The place was empty”.  He says this with a smile as he looks out at the sold out crowd and then gave a moving performance of “Heading South On The Great North Road”.

He then introduced his son, Joe, who’s inherited not only his father’s voice, but also his ability to write excellent songs and hold an audience’s attention with only himself and an acoustic guitar.  Joe only performed three songs.  The first two songs were very serious, demonstrating his ability to write well-constructed and catchy songs which convey a darker and mysterious narrative.  His final song, “Jellybean” was an ode to his four children, a song of many that he has written for them.  While short, he set was certainly sweet, proving just how exciting an acoustic set from a singer-songwriter can be.

Taking the stage immediately were San Antonio’s The Last Bandoleros.  This is a band who are set to blow up any day now.  The only way to describe their sound and their style is to imagine The Beatles early period- “Love Me Do”, “I want To Hold Your Hand”, and “I Saw Her Standing There”.  Now that these songs are fresh in your head, imagine if Paul, George, John, and Ringo, grew up in Texas, firmly resting between American country, Southern rock, and Latin American culture.  That is The Last Bandoleros; a band who’s four part harmonies and bopping pop rock was so good that they were able to conjure up a resemblance to the fab four.  It’s cliché now to report that your band is influenced by The Beatles; everyone and their mother has been saying that since 1964, but this band took that inspiration into modernity, and with a Hispanic-country flair, made a musical experience that was very unique.

With his all-star band, consisting of session drummer extraordinaire, Josh Freese; long-time collaborator Dominic Miller on guitar- who has worked with him for nearly thirty years- , and guitarist Rufus Miller- Dominic’s son, hired for “insurance” as Sting playfully claims, Sting took the stage and dove into The Police classic, “Synchronicity II”. The quartet was backed by The Last Bandoleros and Joe on backing vocals for the entire show to provide excellent harmonies, which ultimately filled out the band’s sound.  From there he jumped right into another Police classic, “Spirits In The Material World”.  For myself, a big fan of The Police, this concert did not disappoint as Sting rolled out a number of hits from his early career, including “Message In A Bottle”, “So Lonely”, and “Next To You”, among others.  Their performance of “Roxanne” was especially good as the band, at the song’s halfway point, completely shifted the groove to a more driving and direct feel, which allowed for them to transition into Bill Withers’ “Ain’t No Sunshine”, before jumping back into the iconic chorus of “Roxanne”.  “Walking On The Moon” was also performed flawlessly as Freese masterfully performed Stewart Copeland’s mythical groove- which has left countless drummers befuddled- and took a handful of opportunity to lay out some tasty fills.

Aside from material from Sting’s earlier career, his set mainly focused on his solo work.  Pulling from last year’s release, 57th And 9th, Sting performed “Down Down Down”, “I Can’t Stop Thinking About You”, and the albums strongest track, the funky “Petrol Head”.  Starting with a cover of David Bowie’s “Ashes To Ashes”- as sung by Joe, which led right into “50,000”, a track written in tribute to the passing of many musicians last year, many of whom, Sting has worked with, looked up to, and called his friends.  Throughout his set he performed a number of his solo hits, ranging from “Englishman In New York” to the exotic pulses of “Desert Rose”.  The ballads- “Fields Of Gold” and “Shape Of My Heart”- were nothing short of beautiful.  This was a set that was carefully constructed to include enough material from all eras of his rich discography.  Preferring to end his concerts with something “quiet and thoughtful”, Sting led the band through the previously mentioned “Roxanne” jam, into the blistering “Next To You”, providing a perfect climax.  Following this, the show mellowed out with an extended rendition of the quintessential Police ballad, “Every Breath You Take”.  Following this, coming full circle, Sting took center stage with just an acoustic guitar, along with Dominic to add ambient electric guitar, to perform “The Empty Chair”, a song he wrote for the Jim: The James Foley Story, a documentary on photojournalist James Foley who was beheaded by isis in Syria in 2014, and performed at The Oscars last week.

Sting is a man who needs very little praise.  His legacy is firmly solidified as one of rock and pop’s greatest, and for very good reason.  His Toronto stop on the 57th And 9th tour was nothing short of amazing.  His voice, even at the age of sixty-five, sounds just as youthful, powerful and exuberant as it does on the earliest of Police records.  Without a doubt, his performance and talents act as a model of aspiration for young musicians as how one can reach of level of sophistication in all aspects of their craft in pop’s ever changing landscape.  His band is extremely tight, professional, and proficient.  They never waver, whether they are blasting out driving rock, off beat funk, or jazz influenced ballads.  This was by far, a spectacular concert which exceeded my already high expectations.  Sting proved to be a legend worth all his salt and refuses to fall back on nostalgia- something he could easily do without complaint from his fans- to deliver a jaw dropping, career spanning performance!