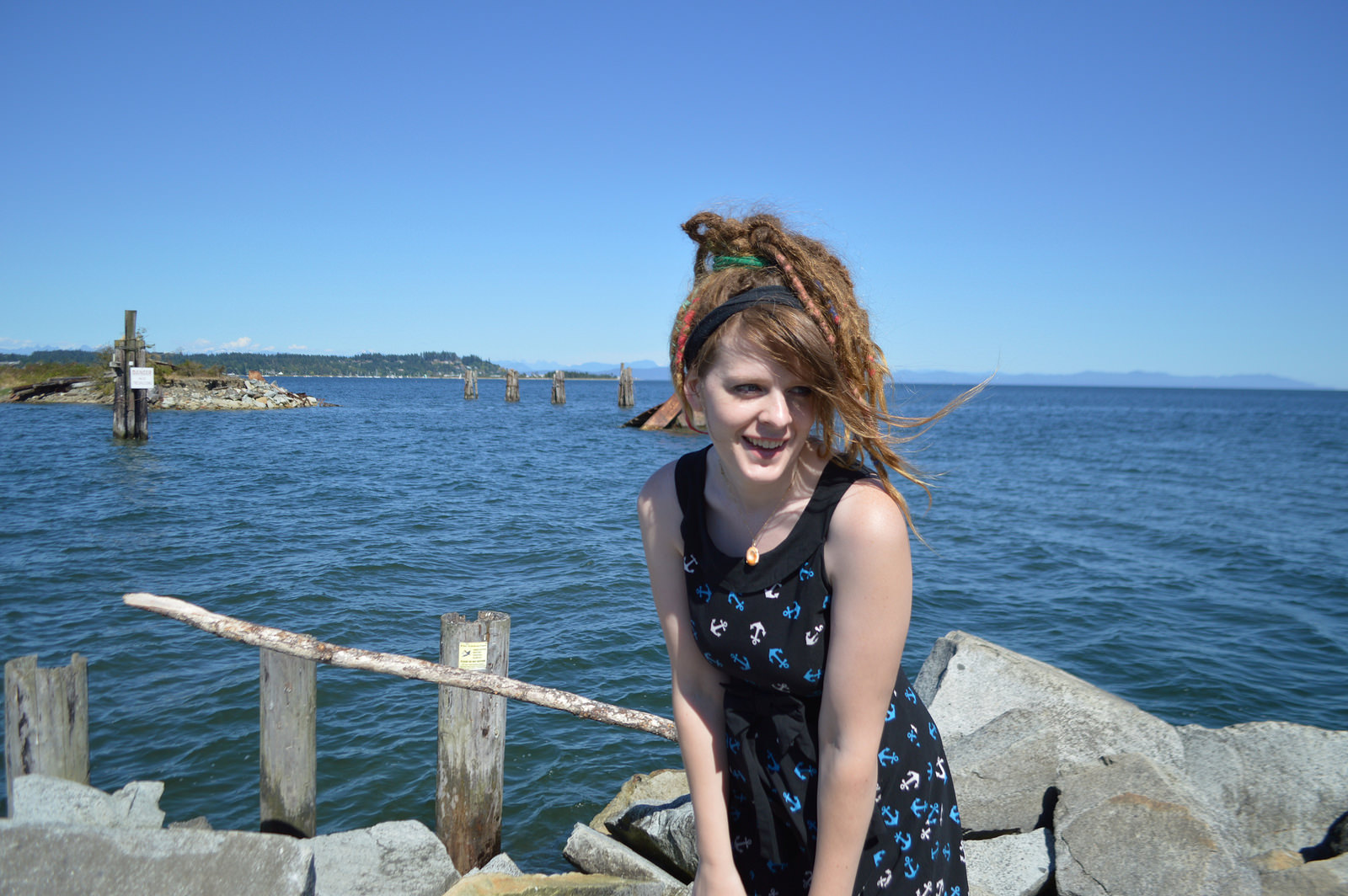 Nanaimo, BC based folk/pop singer/songwriter Kendall Patrick is ready to release her fourth studio project ‘Peaks and Valleys’ on March 3rd of this year. The six track release comes with a slew of tour dates across the country throughout the last of winter and spring. She has said the album tells a story of love throughout the songs, both the ups and downs of it, or “Peaks and Valleys”, if you will. We had a chance to ask Patrick a few questions about her upcoming release, tour dates, and more.

First of all, for our readers who may not be familiar with you, would you mind telling them a bit about yourself?

Ever since I wrote my first song, a floodgate opened up that hasn’t ever ceased. From my early teen years until now, freshly 30 (oh my god!) I’ve been swimming in a sea of songs. It was clear to me that this was the thing I was supposed to be doing with my life, and so I’ve just followed that, refining it little by little every year. After recording a number of albums, touring, and doing all that musician stuff, I made another tweak to my life in 2016 to give music an even greater focus. I decided to eliminate all the non-music-related jobs I was doing and invite a music-only lifestyle so that I could say to my vague aspirations, “I’m here…100% available to you.” I let go of some pretty heavy and long-held time spent in childcare, doing music on the side, and built a new structure that is completely music-centred. It was only fear that kept me from doing that in the past, and with some time off work last year to reflect, I realized, my fear was just a mental construct, and I could just as easily create a new one made of faith. So I never went back to work, and now I’m literally living the life of my dreams. It’s a perfect and celebratory time to be releasing “Peaks and Valleys”.

How long have you been working on ‘Peaks and Valleys’?

Peaks and Valleys was the longest recording process I’ve ever done. It took about 2 years from start to finish We were all pretty relaxed about the timeline because we didn’t have any deadlines imposed on us and we wanted to get it right. Paul and I spent some time choosing songs, co-writing, and arranging before we started rehearsing with the band. Once we were rehearsed we then had to deal with the logistics of all 5 members coming into the studio separately. We’re all really busy and especially with vocals, it was smarter to do a number of shorter sessions rather than full days in order to avoid vocal burn out. In the end the album turned out just how I envisioned it.  The title of the album turned out to represent the recording process as well as the theme of the songs!

What was it like working with others to write the tracks instead of doing it by yourself, as you had previously done?

I started co-writing at the encouragement of some industry mentors. The first few times were really awkward. Looking back that was probably because I’d never met the other writers before. When Paul and I started writing together it was a completely different experience. We had been playing together in my band for the past year and we already had a mutual respect for each other’s artistry. In fact, Paul is one of my all time top favourite singer/songwriters. Our style and taste is really compatible, and we’ve got different strengths that when married make some pretty exciting stuff.

Do you think you’ll write with others on future projects after your experience?

Absolutely. Now that I’ve had the experience of collaboration being successful and exciting, I feel like I have a new tool opened up to me. When I get stuck on a song, I know I can reach out to another songwriter for ideas. With “All Those Years”, for example (the 6th track on the album), I wrote the chorus first and then sent it to Paul. He came over and with his more intimate knowledge of chord progressions, wrote a beautiful verse. It’s not one that I would have been able to write but it fit really well with the chorus. It gave me a taste of what others can bring to ideas that I’ve started. It also creates a bonding experience being able to share the credit for a song. Kind of like how parents must feel about creating a child together!

Who are some of your musical inspirations and influences that are present on the EP?

Ani Difranco influenced my work in spoken word which is featured on my first album. I haven’t brought it back until Peaks and Valleys. Her lyricism continuously inspires mine in all my songs so she’s in there in the other tracks as well. Breaking Ground is actually partly about Brett Dennen. It’s an homage to the ways he’s inspired me as a person and an artist. He inspired me to let go of what was holding me back and take the big leaps necessary to chase my dreams.  “When I found you I changed. I rearranged the whole shebang.” “It’s just something in the way that your voice sounds; I feel found. I will follow it all the way down the coast; breaking ground.”

What are some of the things that inspired these songs?

Peaks and Valleys is an exploration of commitment. I was feeling anxious about it and Paul admits he’s loyal to a fault, so it was an interesting blend of both perspectives. All Those Years is the story of my parent’s relationship, highlighting how they split up for ten years before getting back together and getting married. I won’t spoil the story but I always loved hearing my mom tell it me and thought it deserved a dedication. “You Remind Me of Falling Rain” is about the uncomfortable vulnerability of having feelings for someone and wanting to stay behind the walls that keep us from being in the line of fire of rejection. “Grocery Store Parking Lot” is the spoken word piece that I wrote when our trumpet player Amelia left for an indefinite hiatus to travel. It fits in nicely with “Breaking Ground” which is about when I was in Amelia’s position and stood in that bittersweet place of both letting go, and excitement for the future.

What can your fans expect from your upcoming shows?

I’ll be doing a lot of solo or duo shows, so rather than a full band sound it’ll be stripped down. As much as I love playing with the band, there are a lot of perks to playing solo. I put a lot of detail into my playing and craft my lyrics really intentionally and thought out, so it gives these dynamics a chance to come through without getting drowned out by a big sound around me. I hope audiences will resonate with the songs, feel moved, and have a good laugh with me (I love banter).

I’ll be doing my best to give “Peaks and Valleys” a good life by playing a lot of live shows, getting radio play on college and CBC stations, and making videos. I’d also really like to not wait more than two years to release the next album. I’ve got so many songs and I write a lot so if I don’t keep a certain momentum of releasing content I feel clogged up. It’s just a matter of finances, which is always a challenge. But if Peaks and Valleys is received well, it will help to garner the support to keep moving.

Here at Canadian Beats we like to ask a few fun questions so your listeners and our readers can get to know you a bit better:

What’s something you do to get through the last few remaining weeks of winter?

Aside from lots of baths and cuddling with my dog, I stay warm on the inside by keeping up with a jam packed musical lifestyle. I work at an awesome music venue where I do sound and door for shows, and participate in our weekly open mic. After work, I usually go to the studio and either write or do online broadcasts through pocketlive.tv. Pocketlive is cool because anyone can tune in live or watch a replay of my channel “Songwriter’s Living Room”, where I have guest artists and we talk about art and music and perform for the viewers. And it’s always done in the warmth of a house or studio!

Are there any Canadian bands or artists you’d recommend to your fans?

Since working at a local music venue, I’ve heard a lot of acts that tour through our town. Some of my favourites are: The Blue Moon Marquee (British Columbia, Gypsy Blues), Richard Inman (Manitoba, country/folk), Old Man Luedecke (Nova Scotia, folk).

What song can’t you get enough of lately?

If you could plan a tour with any artists or bands you’d want, who would be on the bill?

Where would you go on your dream vacation and what would you do?

I’d like to go anywhere that’s culture is radically different than here. I suspect the west has conditioned me to hyper-PC, likely individualistic to a fault, and to take a lot for granted. I want to be exposed to a life that’s going to challenge everything I think I know. To quote Ani Difranco, “You’ve got to look outside your eyes. You’ve got to think outside your brain. You’ve got to walk outside your life to where the neighbourhood changes.”

Come to a show and give me a hug!