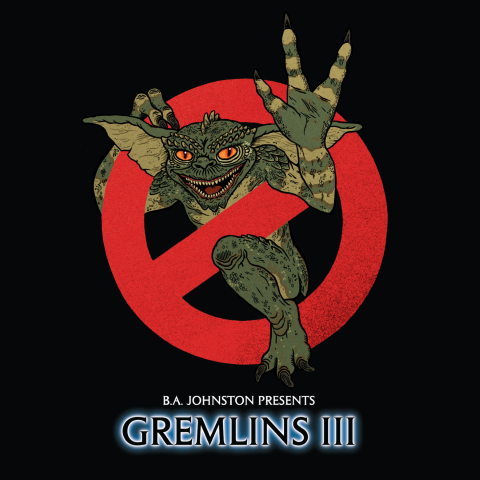 One Line Review:  Halifax based BA Johnston proves he is The Weakerthans’ blue-collared second cousin, Mr. Plow’s best friend, and the Canadian answer to the Dead Milkmen, with the much needed (non-sequitur) soundtrack to the much-needed (never-filmed) movie Gremlins 3.

Many musicians, bands, performers, have the problem of taking themselves too seriously.  The divide between artistic integrity and outright buffoonery is indeed thin, simply stupefied words layered over unnecessarily catchy riffs sung by performers who expound political pontifications or social conscious biased at Teen Choice Awards holding grotesquely bright surfboards while pandering to stardom obsessed minors.

The trick, the key, to identifying a true self-aware artist is the ability to take what they do seriously without taking themselves too seriously, to have the courage – nay, the audacity – to create music that fulfills the artist and may, if the artistic muses agree, fulfills audiences as well.

Prepare to be filled.

Halifax based BA Johnston is the perfect blend of straight ahead irreverent rock, serious on delivery and comic in intent.  Gremlins 3 is music to make you involuntarily smile, rock out with your smocks out (because you work at the deli of the local supermarket) and continually rewind the tape in your rusted out truck from a bootleg your cousin in Lloydminster dubbed for you.  If you’re lucky, you will buy the disk man from the pawn shop with the tape deck convertor you’ve been saving up for with your next raise.

Gremlins 3 is a series of songs discussing the trials and tribulations of hating work, exploring alley drinking, contemplating people’s personalities with their motor vehicle choices, lamenting the lost art of great ninja movies, and eating small fries on a Grey Hound on the way to Saskatchewan.

BA Johnston is a perfect mosaic blend of They Might Be Giants, Daniel Johnson, The Evaporators, Mr. Plow, the Weakerthans, and the Dead Milkmen, with Forgotten Rebels phrasing and tough as nails Social Distortion delivery.

Cleanly produced by Mathias Kom (Burning Hell) and Stephan Macleod (Windom Earle), Gremlins 3 highlights Reaguns Rayguns as the backing band for six (the Christian number of the beast or Asian number of good fortune) tracks.   As an added bonus, according to BA Johnston’s press release, “every single song features actual instruments played by actual musicians, and not just the talentless B.A. Johnston.”  Come for the tunes, stay for the musicianship!

With songs such as “I’m Too Messed Up To Be In this Canoe”, “Alley Beers”, “I’m Turning Into My Grandma”, and “So High In Foodland”, music fans are treated to a blue-collared Hemingway with direct prose exposing experienced universal truths such as booze cruising looking for a lake party using directions written on an A & W napkin.

(True story – A & W is expanding restaurants in Canada after the popularity of their “we don’t use hormones in our beef” campaign.  Really?  If you choose to eat greasy beef, eat greasy beef.  Own that decision.  Better yet, but it from the local burger stand that stays open all night to fulfill after bar cravings and, most likely, saving up for a child’s college fund.  Fast food with a social conscious is like having a dog’s voice box extracted because it barks too much.)

With a track listing of 20 songs at 39 minutes, Gremlins 3 is as diverse as it is concise showing BA Johnston’s rock chops (“I Need Donair Sauce”), folk sensibilities (“No Wanna Shambhala”), electronica vibe (“Drivethru Beef”), and quirky sentimentality (“Sourpuss”).  It takes a true talent to write laser precise songs not hiding behind overly long instrumental introductions or pretentious breakdowns.  Drum solos are a completely different story…

If you are looking for an album to shoegaze to with your friends while you mouth along to lyrics that you have no idea what they are and, if you did, can’t comprehend, go somewhere else.   Go start a band with your college drop out literature major who “taught themselves guitar” a few months ago.

If you want catchy sing along songs about cheap beer and go canoeing, this record is for you!

Donair got a hold of me, indeed.