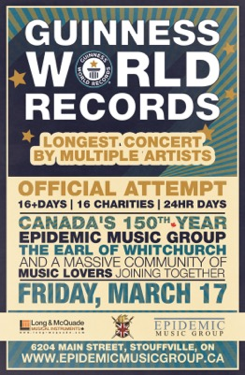 What better way to celebrate Canada’s 150th than by attempting to beat a Guinness World Record?

Beginning on March 17 and organized by Kevin Ker and Epidemic Music Group, and hosted at the Earl of Whitchurch in Stouffville ON, the event will aim to capture the Longest Concert by Multiple Artists record, currently held by Las Vegas.

In addition to 16 + days of round the clock live music, each day will showcase and highlight a different Canadian charity including Brain Tumour Foundation of Canada, Gord Downie Fund for Brain Cancer, North Toronto Cat Rescue, Sick Kids and so many more.

The rules are strict with guidelines that include no more than 5 minutes in between acts, no more than 30 seconds between songs, the same song cannot be played more than once in a four-hour period etc.

With over 100 volunteers and approximately 400 bands and artists, this is an event that no Canadian should miss.

For more information on the event, or how to get involved, click here.