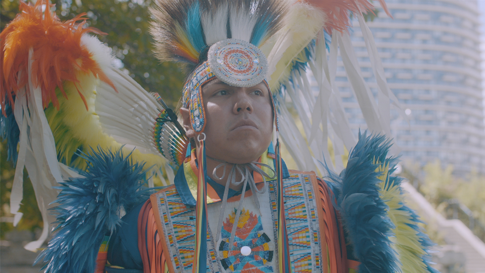 Earlier this week A Tribe Called Red debuted their brand new video for Indian City featuring Black Bear with FADER. The video comes as the latest visual installment from their critically acclaimed album We Are The Halluci Nation.

We Are The Halluci Nation has hit #1 on iTunes Canada Top 200, #1 on Earshot! And #2 on the iTunes USA Top 200 Electronic chart. The album features appearances from industry heavyweights like Yasiin Bey, Saul Williams, Tanya Tagaq, Shad, Lido Pimienta, Leonard Sumner and more.

The video, which you can watch below, was shot in Toronto and created with the support of the Canada Council for the Arts and Sesqui.

“Like many movements, the Halluci Nation grew from a place of necessity. Long before we fought in the streets, our first battles were fought on the dance floor. Some of us have learned about our culture from birth, being taught to sing, drum and dance like we were being shown to speak and walk. Some of us have found our way first through beats, breaking and turntablism, only to find it leading us back to our roots. The movement carries memories and the drums are kept deep in our chests, no matter how hard they tried to rip them out. So, we learned to dance on these city streets and write our songs on digital drums.” – Oral History of the Halluci Nation

March 22 – Peterborough, ON | The Historic Red Dog *SOLD OUT

Connect with A Tribe Called Red: