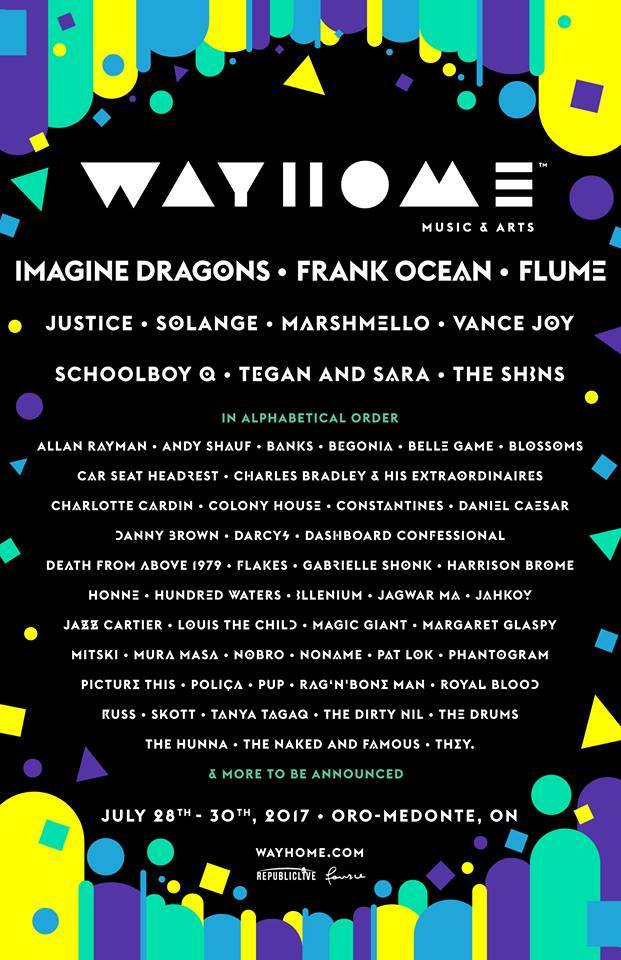 After months of anticipation and more than a healthy dose of speculation team WayHome recently released the first wave of the 2017 lineup. To say that the reception has been lukewarm may be a bit of an understatement; however, despite what anyone might think about the headlining acts, the under card shows some real strength, particularly in the area of Canadian content. With so many possibilities available over a three day weekend it can be hard to form a plan of attack but this top five list of artists not to miss will get you started with a solid foundation.

Tagaq, a vocal champion for aboriginal rights and culture; including the controversial annual seal hunt; has never been one to shy away from either her own identity or uncomfortable topics and it shows in her music. The multiple award winning Inuk throat singer blends the traditional art form with a modern edge and anger that has led to many labelling the experimental artist the world’s first punk throat singer. Bestowing such a limiting title upon an artist of Tagaq’s calibre is to do her a great disservice however. Incorporating a modified take on the ancient Inuk tradition with components of such far reaching genres as heavy metal, classical and EDM to name a few, she has constructed a sound that is both ethereal and animalistic. Her accompanying live performances are an intense, energetic display that are not to be missed.

University towns by default produce great indie rock bands. It’s a law of physics that is generally accepted and has been well documented. That said, there are indie rock bands and then there are Guelph natives Constantines. Imagine if you will Bruce Springsteen, Nick Cave, and The Clash had a baby – You get where I’m going here? You buying what I’m selling? – that baby would be Constantines. You won’t get any crazy aerial manoeuvres with these guys, you won’t even get any really great jumps. What you will get is a solid rock set by a five piece so tight you will be in disbelief they could have taken a four year hiatus as recently as 2010. As a warm up I suggest watching the entire Live at Massey Hall episode featuring them.

This Montreal songstress made her first appearance on the French singing competition La Voix in 2013 where she was a top four finalist and since then has steadily built a following. 2016 saw her bring her sultry fusion of pop and smooth jazz to the masses with the release of her debut EP Bad Boy. With a stage presence that keeps her audiences captivated and  soulful vocals, you barely notice her slipping easily between both English and French. It’s mindboggling why the singer songwriter is not yet a household name but, it’s not likely to stay that way much longer. Having played some of the most prestigious small stages on the tour for her EP she’s definitely ready for a bigger one like WayHome offers.

PUP earns a place on any list like this for the sheer raw energy of their live set alone – three years on the road caused lead singer Stefan Babcock to suffer a haemorrhage in his vocal chords! – add the fact that they have paid their dues playing any and every venue you can think of… and they have to be close to the top. Aside from having a solid sound and a relevance many in their genre struggle to find with more mainstream audiences, the Toronto foursome have a snarky, endearing chemistry with their audiences as well. Whether you’re all about the mosh pit or just want to hear some really good power punk, PUP’s set is likely to be one of the most fun of the weekend.

More than anyone on this list 2016 has been a break out year for Toronto’s Jazz Cartier, kicking it off with the release of “Hotel Paranoia” and culminating in a double Juno nod for Rap Recording of the year and Breakthrough Artist of the Year. Cartier brings a lot to the table with an all-out approach to his live performances which often see him frenetically dashing around the stage sans shirt, and freestyle skills to rival Lil Wayne and Snoop Dogg. The self-titled “Prince of the City” has spent the last twelve months proving that, rather than being empty hype, he is poised to explode as rap royalty. At the rate he’s going Jazz Cartier won’t be on the under card for very long. With a new release in the works and more touring ahead don’t be surprised if in coming years you see him jumping up to a headlining slot.