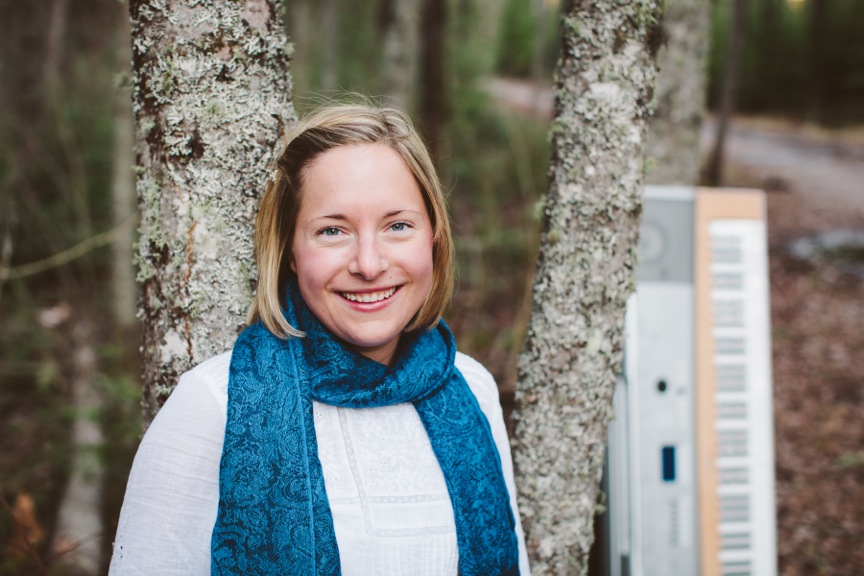 We had the chance to catch up with Ontario based singer-songwriter, Reilly Scott. Now it’s your chance to find out lots about this up & coming artist, and be sure to check out her Kickstarter campaign to raise funds to produce and manufacture her debut album, Beautiful Unfolding.

Hi everyone! My name is Reilly and I am a singer-songwriter from Kenora, Ontario. I am a pianist, a vocalist and guitar player and I am currently in the process of recording and producing my first studio album entitled ‘Beautiful Unfolding’.

The past year has been a blessing for me as I have been able to perform at my first outdoor music festival, travel to Newfoundland/Labrador to perform as a visiting artist at the 41st Labrador Creative Arts Festival, I released my first single to the world, I developed a website and was able to produce and release two music videos for my songs ‘Relief’ and ‘North Sky’.

I am so excited and happy to be creating an album as it’s been a goal of mine for a long time and I feel so honoured at the amount of support that the Northwestern Ontario community has offered me in regards to this project.

I have also just released a Kickstarter campaign in order to raise the funds that I require to produce and manufacture ‘Beautiful Unfolding’. The campaign includes a new music video for my second single ‘North Sky’, filmed at Knox United Church in Kenora, ON. Via the campaign, I am offering a pre-sale of both digital and hard copies of the album, along with other fun rewards that encourage folks to support it. For this project I have the priviledge of working with five other young, Canadian artists (four of which are from Kenora). A large portion of the Kickstarter proceeds will be going towards artist fees to compensate these fine, young artists for their time and talent.

You can check out my campaign here!

The genre of music that I compose and perform is categorized as contemporary folk and/or singer/songwriter. It is performed acoustically, with guitar, piano and vocals as the frontline sounds. The vocals that I provide are rich yet soft, with blended, multi-range harmonies interspersed throughout. I strive to create a sense of connection and relatability through my songs by coming from a place of authenticity and transparency.

The songs that I write are usually inspired by every day experiences. They usually come to me at random times throughout the day and when they do, I have to reach as quickly as I can for the nearest pen and paper (or even my iphone) in order to get them down before I lose them!

I am extremely interested in the arts/music for social change and have a passion for touching on subjects that might otherwise be considered ‘taboo’, through music. I’ve experienced first hand what a powerful social tool music can be and so it’s hard for me to let that go. The songs I write touch on topics such as mental/emotional health, displacement, isolation and even intergenerational trauma. They also touch on uplifting topics too, such as health, hope, trusting the process and seeing the divine in everything.

My next live show is on February 18th at the Broken Paddle Coffee Roastery in Kenora, ON. My live performances are typically acoustic, coffee house style sets involving piano, guitar and vocals. I was recently able to incorporate a Viola player in to a live performance and it was really magical!

I would probably suggest that folks listen to/watch my video for ‘Relief’ simply because it was my first single and I am very proud of the song and the video. The song was written about a relationship that I experienced in Sioux Lookout and about the feeling of relief and ‘awakening’ that I felt by allowing my true self to be shown to this person. The video was filmed by my friend Matt Kennedy of the company Upriver Media Inc. at the Vernon Nature Trails in Kenora and I think that it is a great example of the beauty of nature in this area of the province/country.

I really love Canadiana and I typically tend to veer towards the Canadian folk/folk-rock genre. It is difficult to narrow down the list but some of my favourite Canadian artists include: Whitehorse, Amelia Curran, Joel Plaskett, The Wooden Sky, Kathleen Edwards, Rose Cousins, JP Hoe, Sarah Harmer, The Wilderness of Manitoba, The Small Glories and The Once.