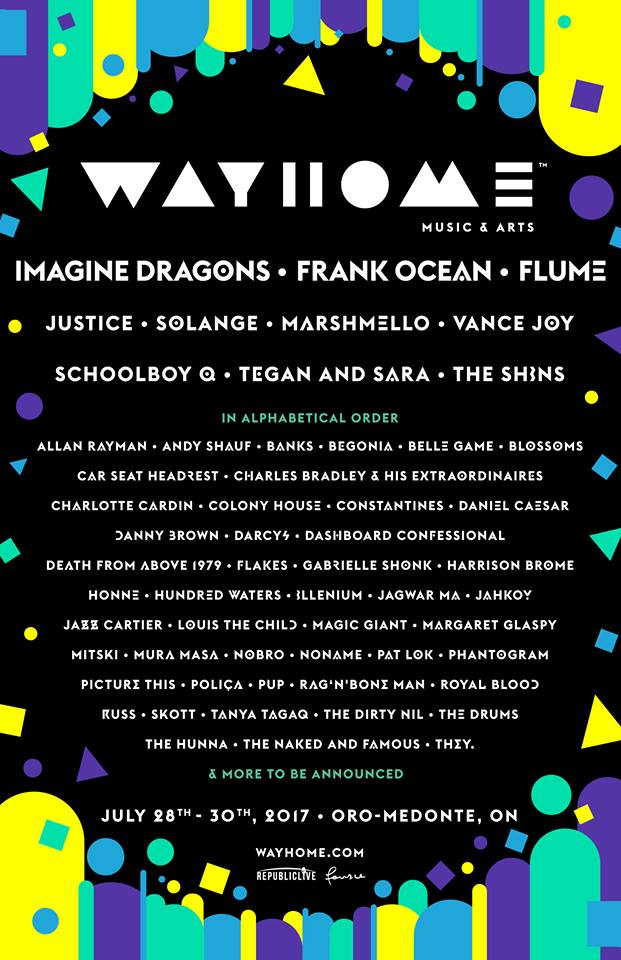 After weeks of anticipation Republic Live’s fledgling camping festival WayHome Music and Arts Festival today followed up Friday’s hints with the release of the first wave of their year three lineup. For many this only served as a final confirmation of what they found out late last week. as one of the under card acts inadvertently leaked the lineup on Friday shortly after the hints were dropped by posting a proof copy of the poster to their Facebook page.

After a break with AC Entertainment in favour of local talent buyer Fource, the festival has made a decided turn in direction from previous years with the inclusion of Imagine Dragons, Frank Ocean and recent Grammy winning producer Flume as headliners.  The bill has been causing a lot of controversy since the leak, with many fans who bought into the pre-sale offered late last year (at an increased cost over the regular tier 1 pricing) based primarily on the indie rock heavy offerings of 2015 and 2016, feeling betrayed while fans of EDM, dance and hiphop are rejoicing.

The second tier sees 2015 alum Vance Joy along with the likes of Solange, Schoolboy Q and Canadian pop darlings Tegan and Sara. The under card offers tons of Canadian content in the form of Jazz Cartier, PUP, Constantines and Andy Shauf among other. Even in this respect many complaints have been lobbed by Toronto market fans who say most of the strongest acts are locals who can be seen at any time. Other notable names from the under card include Charles Bradley – who is back in action after having to cut his 2016 tour short to focus on his health when he was diagnosed with stomach cancer – Car Seat Headrest, Dashboard Confessional and, the source of Friday’s leak, Death From Above 1979.

There has been much speculation over the weekend that, due to the relatively few number of bands announced, one of the 4 stages would be being done away with. Many are now breathing a sigh of relief as, unlike the proof copy that was posted on Facebook, the official poster includes the words “& more to be announced” as the final line. This also leaves speculation there is room for those artists currently being touted as headliners (despite not being acts typically thought of as headliners) to be moved down to tier 2 in favour of bigger names; much as Alt-J was in 2015 with the announcement of Neil Young’s appearance.

In what has overall felt like an off year for festival lineups it has to be said that what Fource and Republic Live has offered up so far can be called weak at best. In a market as saturated with summer festivals as Toronto is, not to mention the number of huge venue shows adding to the musical options available, a lacklustre lineup is unlikely to pull in the number of fans needed to break even, let alone make a profit. One has to wonder, with the rumoured demise of Bestival, if WayHome isn’t far behind. That said, we can’t help but hope that the “& more to be announced” tag at the bottom of the poster will see some bigger names on the 2017 circuit added to strengthen the bill.