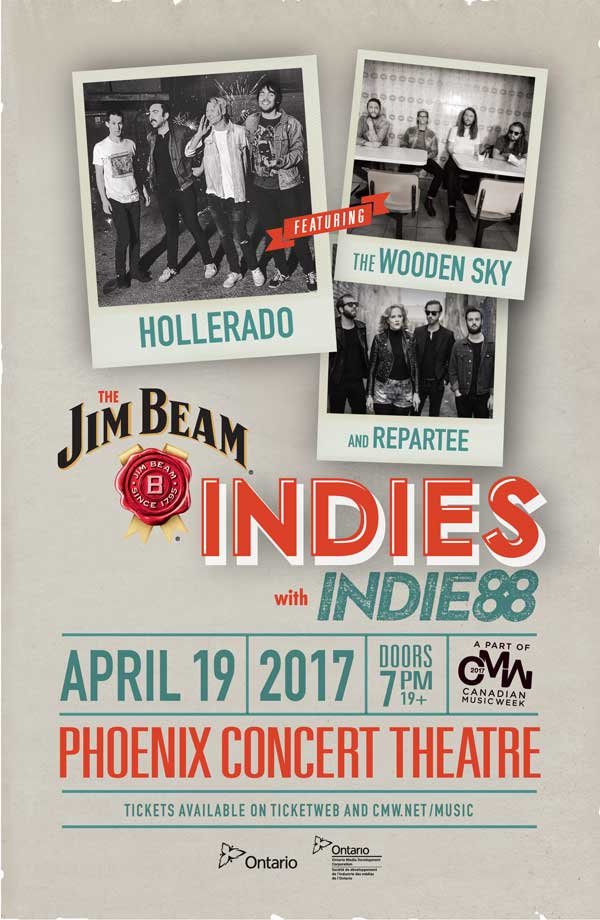 Canadian Music Week has announced an exciting feature to the annual Indie Awards! Featuring performances by Toronto’s Hollerado and The Wooden Sky, as well as St. John, NL indie-pop group Repartee, the show is sure to highlight the best of the local indie music scene.

Partnering with Jim Beam, one lucky band will take the stage and join the lineup as the grand prize winner of the Jim Beam Make History Talent Search. The inaugural competition will run in association with Canadian Music Week to support emerging talent.

The radio contest will take place in Vancouver, Calgary, Toronto and Montreal with several stations including 102.7 The Peak, X92.9, Indie 88 and CHOM FM. Independent  Artists (not signed to a major record label), must submit an original song or video and bio to the radio stations’ websites or indies.ca, to be considered for the competition. A music industry panel from Canadian Music Week will select up to five artists as regional finalists in each market. Regional finalists will advance into the national competition and one grand prize winner will be selected to win travel, accommodation, and the chance to perform live on stage at the 2017 Indie Awards. The show will take place at the Phoenix Concert Theatre in Toronto on April 19th, 2017.

For more details regarding the competition, see here. Tickets for the Jim Beam Indies with Indie 88 are on sale now!