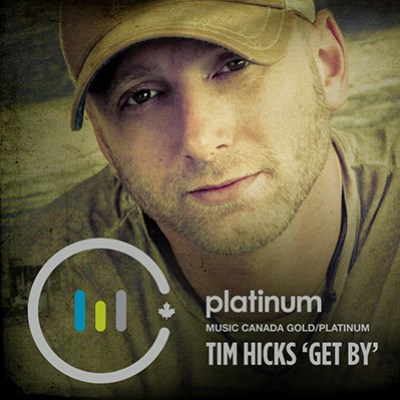 FIRST – February 6: the day that Tim Hicks debut single “Get By” goes PLATINUM! This is what the whole country music community is “buzz buzz buzzing like a neon sign” about right now.  It was released in December 2012 as the first single from his debut album Throw Down. He can add this to his much earned five GOLD certified singles in addition to two JUNO Award nominations and the 2014 CCMA Award for Rising Star. In addition of all this, his cumulative streams on Spotify add up to seven million plus including one and half million for “Stompin’ Ground,” and his North American hit “Stronger Beer” is knocking on the door of PLATINUM certification by Music Canada.

SECOND – The month of January had Hicks travelling across Canada, from coast to coast, for his extremely high-energy Shake These Walls tour taking in 15 shows in 24 days much to the delight of thousands of his fans. From his devoted long-time fans to his newly won-over fans, to be a part of the craziness was phenomenal. Hicks and his band simply nailed it each and every show.

To say that Tim Hicks has had an absolutely stellar year (and it’s only the beginning of February) is a total understatement. Hicks is truly deserving of all the good things that have come his way. He is magic – both on stage and in the recording studio. And that doesn’t happen often. Not only does he have amazing talent, he also reaches out to his fans and has a lot of appreciation for them. He knows that without his fans there would be no tours, no shows, no platinum records. It really doesn’t get any better than that.