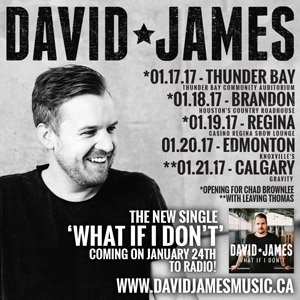 Canadian Beats wanted to find out from David James himself about his first tour. Check it out:

This is your first tour. Tell me how you feel about being on tour with Chad Brownlee and Leaving Thomas. What do you think you bring/add to these dates?

I’m really excited to get on the road … FINALLY! I’ve been so focused on creating the music, so it’s gonna feel really good to release all of this built up energy night after night! Especially looking forward to debuting a few songs nobody has ever heard before.

How do you feel about your first solo gig in Edmonton? You must be so excited!

Edmonton is a really special city for me. I used to play hockey tournaments there as a kid, it’s where I experienced my first two CCMA Awards, and I have a lot of family there. It’s going to be great to play Edmonton and a few other of these Alberta towns for the first time!

The tour will partly be in support of James’s latest single “What If I Don’t” which is set for release on January 24 (available on all digital platforms January 27). He says, “This song is about wanting to be a better person for someone. We’ve all had those people who come into our lives who treat us like garbage. This guy is saying he wants to change all that; really be the reason there’s a smile on her face, not a tear in her eye.” It’s also “a step in a new direction,” James reveals. This single has a more pop-inspired sound, featuring smoky lyrical guitar interplays and explosive, dynamic endings.

Here’s what else James has to say about his new single:

What can you tell me about your new single “What If I Don’t” that you haven’t mentioned to anyone yet?

I think it might be my favourite song that I’ve ever created. The lifts heading into the first and second chorus just feel really good, and this song kind of represents a newer, bolder direction from me for my music. I’m really excited to get it to radio!

As 2017 begins, David James is “in a G3 sitting on a runway ready to take off.” His shows and the release of “What If I Don’t” has him so pumped that you will be able to experience something special just hearing him perform live. If you’re in the area, don’t pass up the chance to see James!

To purchase tickets for the Thunder Bay and Regina shows, go to http://chadbrownlee.com/shows/