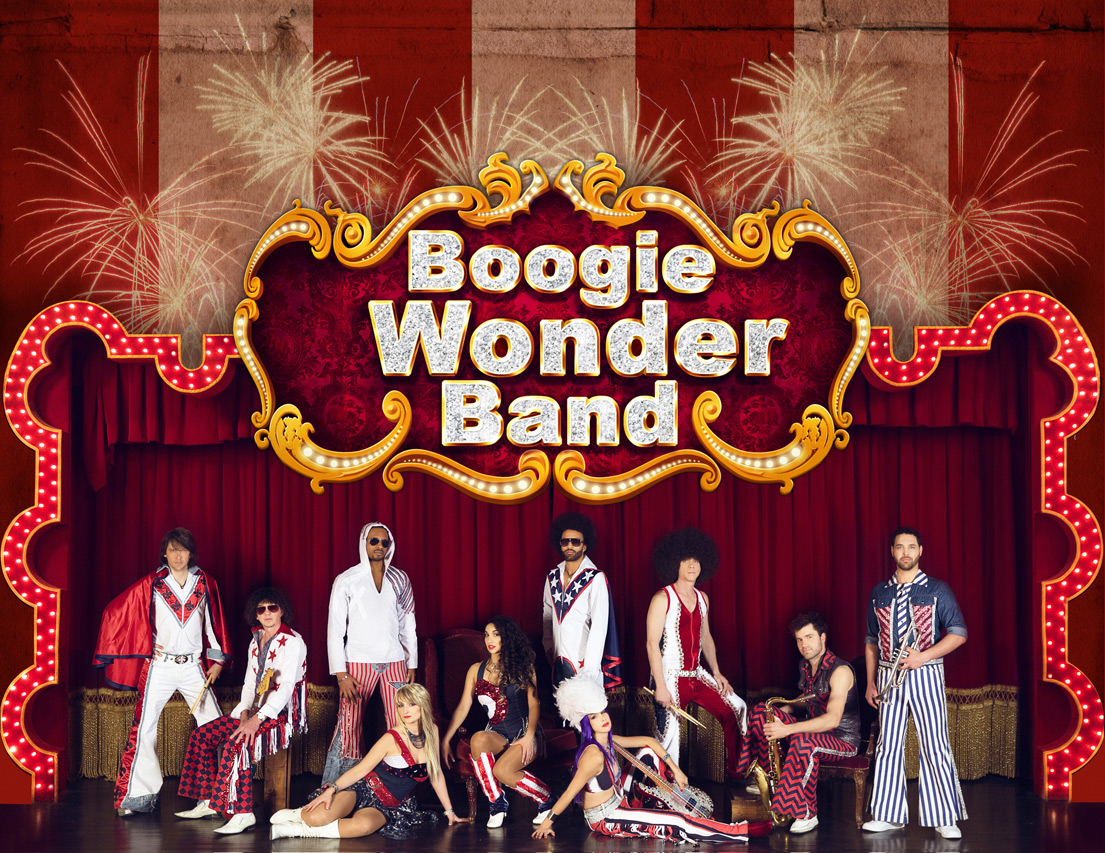 Ladies and gentlemen, introducing one of the greatest disco cover performers the world has seen! Make some noise for Boogie Wonder Band!

How did this idea to start a cover band come to be?

The idea from day one was to bring people back in time, bring them back to party at Studio 54 in 1976, with all the glitz, glitters, glamour of the 70s. We wanted to recreate the sound of those amazing songs that’s why we are a 10-piece band with 3 singers, percussions and a horn section (no tracks/sequences) We are performing this great music live with all the choreography, light show and the crazy outfits!

Do you guys have any rituals or routines you do before your show?

We always have a game plan before every show, we sit down together and go through the set list and our pacing. It brings us together and we focus on what we need to do to give a great performance!

What would you say has made Disco and Funk such entertaining and uplifting genres?

The 4 on the floor always has the head-bopping effect. Disco & Funk is mainly about partying and getting down, so there is no deep lyrics to make you think too much! As well, these songs have been around for a few decades, so they reach every generation, either you lived the era or you discovered them in a Disney movie lol! But mainly , it’s feel good music!

What have been when your greatest achievements in your career as a band?

We have quite a few after 3000 shows around the world!! I’d have to say playing for Celine Dion’s wrap-up party in Las Vegas, performing in New Orleans right after the Mardi Gras parade and playing with Kool & the Gang at midnight in a wine festival in the streets of Brindisi, Italy are fun to mention!

Is there one song in particular that you favour or that really gets the crowd going?

Well lately we have been playing a special version of Knock on Wood that works very well….Play that Funky Music is a winner too!

I’ve read that you performed around the world! Is there any place in particular that you would wish to perform?

We had an outstanding experience in Ecuador, I guess we would love to go back to South America, the fans are incredible, really into the music, it was quite an experience…

Do you have a favorite Canadian artist that you cannot stop listening to? If so, who is it?

There are many great Canadian artists, the band and our crew really like Monster Truck, The Sheep Dogs and The Damn Truth

Any plans for touring this year?

Yes! We’re starting the New Year in NYC, followed by a show in Windsor,Ontario, St-Charles,Il, ……we have many dates all over Canada and the USA in the upcoming months…

Thank you for taking the time to talk to us! Lastly, is there anything you would like to tell your fans?

Thank You! We have really loyal fans all over and we couldn’t do it without their amazing support!