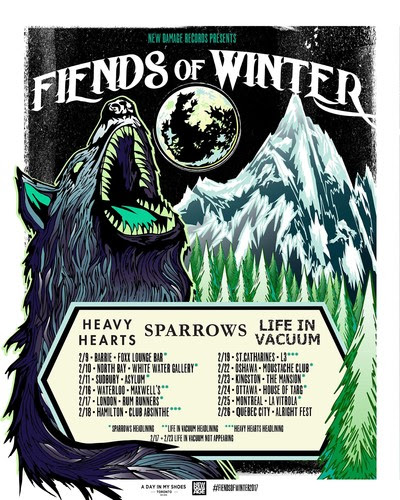 Toronto heavy music label New Damage Records have announced tour dates for the exciting Fiends of Winter tour. The Ontario/Quebec tour runs for 12 dates and starts off February 9th, 2017 in Barrie, ON and will wrap up on February 26th, 2017 in Quebec City.

Toronto-based post-hardcore band Sparrows, who have just released their latest album Let the Silence Stay Where it Was in October, will headline the majority of the dates, while hardcore-math-punk trio Life in Vacuum will headline in their hometown of Waterloo. Heavy Hearts will headline in Hamilton and St. Catherines. This is a show you won’t want to miss! Tickets for the tour are only $10 and are available for purchase here.

“New Damage Records’ inaugural Fiends of Winter tour is focused on showcasing these great bands on weekend warrior runs,” comments New Damage founder Joel Carriere. “For only ten bucks (a little more than most spend on coffee daily!), fans can catch three amazing bands from our growing New Damage roster and be a part of a special event that truly involves and engages the heavy community in local areas.”